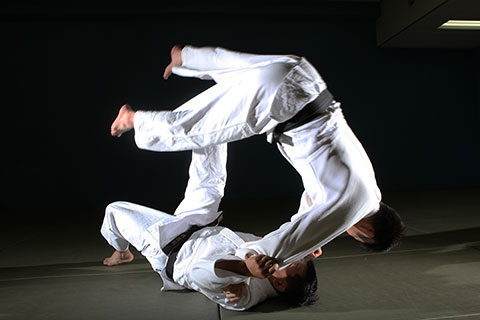 In Brazilian Jiu-Jitsu, most of the takedowns come from either wrestling or Judo. In that sense, those that practice mostly Gi Jiu-Jitsu, find Judo throws to be more appropriate. However, Judo throws are not all the same, as they tend to belong to certain categories themselves. As such, not all these throws fit Brazilian Jiu-Jitsu equally as well. Some, however, are simply tailor made for the Gentle Art. One of them is the Sumi Gaeshi, AKA the sacrifice throw. Let’s see where exactly the Sumi Gaeshi fits in BJJ and how to get the most out of it.

Jud throws are an extremely useful tool for Brazilian Jiu-Jitsu practitioners. Since Judo also places a heavy emphasis on grip placement, its throws are right there for the taking. the only trouble is that Judo throws do take quite some time to master. Even if you decide to focus on simply one throw, you’re going to need to put in the reps. Judo is all about non-stop drilling, which is something ground fighters cannot focus on completely. So, throws that fit BJJ need to be fairly easy to learn and match the need of the game. Enter Sumi Gaeshi.

As far as the usefulness of Judo throws for Brazilian Jiu-Jitsu goes, there are two points to remember. First, you need to choose the throws that are not going to land you in trouble. An Ippon Seio Nage is a great throw, but it may result in your opponent taking your back. Eliminating risks is the first criteria for choosing a takedown. The second is the learning curve. There’s hardly a point dedicating huge chunks of your time to learning all Judo throws for BJJ purposes. If you can, then, by all means, do so. However, for those pressed for time (which is the case with the majority of grapplers) Sumi Gaeshi fits the bill perfectly. Even better, there’s a great fallback in case you fail – pulling guard.

Takedowns fall under the fundamental BJJ techniques category and students of all levels need to know how to get the match to the ground. Bernardo Faria’s “Foundations of iBrazilian Jiu-Jitsu” DVD set covers every aspect of grappling fundamentals. Takedowns included!

How The Sumi Gaeshi Works

The Sumi Gaeshi throw is part of the sacrifice of throws family in Judo. It is a throw that Judokas learn early on, and some continue to use it all the way to Olympic glory. In terms of mechanics, the Sumi Gaeshi appears quite easy. You take an opponent and you roll on your back, throwing the opponent over your head. Well, in practice, executing the Sumi Gasehi is not quite that simple.

The Sumi Gaeshi depends on a few mechanical principles in order to work ta a high percentage rate. First, you need to have the correct grips in order to even think about going for it. Secondly, you need to have correct foot placement and posture control. Finally, the throw itself needs you to position yourself correctly underneath the opponent.

The Sumi Gaeshi grips are originally on the collar of an opponent and on the back of the belt. Alternatively, for the needs of Brazilian Jiu-Jitsu, you can also use a sleeve and back of the Gi grips. Foot placement, footwork, and posture control are also crucial to the Sumi Gaeshi. Namely, the grips’ purpose is to allow you to break the opponent’s posture. Once you have that, you need to make sure your hips get closer to the opponent, which requires you to step forward. Then, one of your legs (on the side of the belt/back grip) needs to hook the inside of the opposite side leg, similar to a butterfly guard hook.

Finishing the Sumi Gaeshi requires you to aim to place your butt next to the foot you’re standing on. The closer your butt is to your heel, the better. Only then can you think about rolling on your back, maintaining a curved spine and kicking with the hook-in leg.

For Brazilian Jiu-Jitsu, the advantage of the SumiGaishi is primarily in its easy mechanics. It is a throw that you can master in a short while, compared to more complex moves like the Uchi Mata. It also ties in perfectly to the game of people who pull guard. In BJJ competition, pulling guard does not result in points. So, if you have a solid Sumi Gaeshi ready, you can use it as a first attack. If for some reason, it fails, you can always continue into a closed or open guard pull and still work your game plan. IF it works, however, the Sumi Gaeshi most often lands you into the mount, which along with the throw equals 6 points. that’s quite the advantage to have if you ask me.

Furthermore, the Sumi Gaeshi doesn’t have to be strictly offensive. In sports Judo, grabbing the legs is forbidden so people use the Sumi Gaeshi exclusively as an attack. Since in BJJ there’s no such rule, the Sumi Gaeshi is the perfect single-leg takedown counter. Even better, you can use it as a sweep, without even being up on your feet. This thicks all the BJ Jboxes as you have a high percentage move that you can attack and counter with from different levels in a match.

In terms of takedowns, once you establish grips you can think about the Sumi Gaeshi. Since people start Brazilian Jiu-JItsu matches bent over, establishing proper grips is not as difficult as in Judo. For offense, the sleeve (at triceps height) and back of the Gi grips are sufficient for an effective throw. Remember to Be fast though, as you can’t really maintain the entry position for long without compromising control.

As a single-leg counter, the Sumi Gaeshi requires next to no set up. Namely, as your opponent shoots and establishes grips, there’s a clear path to their back. A cool tip to know is that once you get a belt grip you need to force your elbow into their spine, completely controlling their posture. Whether it is collar or sleeve, from there you can get any second grip you want. In terms of leg placement, your foot is already in between the opponent’s legs, all you need is to turn it outwards and hook with it. From there you finish just like before, butt to heel and roll.

Form the bottom, there are countless of positions that you can use to sneak a Sumi Gaeshi from. Whether it is the closed or open guard, all you really need is the hook on the leg and the grip on the belt.

From the closed guard, look to establish double sleeve grips. Once you have them, swing one leg over an opponent’s arm, much like when looking for a lasso guard. Switch the grip you have on their sleeve to your other hand and sneak the hook another leg. Next, sit up and go for the belt grip. Sweeping from there is as easy as lying back and extending the hook-in leg.

Also, any time you find yourself in a butterfly guard, for example, you can think of a Sumi Gaeshi. Since the hook is already there, go for the belt/back grip before you try to sweep. Starting from an overhook butterfly guard makes this really easy to get.

BJJ Mobility Drills For Flexible Hips
Grappling Without Limits: Wrestling And Judo For BJJ
Balance In Jiu-Jitsu As The Ultimate Sweep Defense
Jiu-Jitsu Techniques For A Complete Competition Gameplan