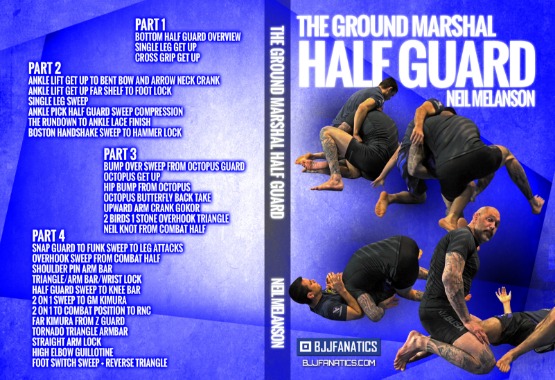 A few years ago, not knowing who Neil Melanson is, was somewhat forgivable. Today, if you are in the dark about who Melanson is, then you’re doing something wrong. As far as grappling is concerned, Neil Melanson is right up there with John Danaher, Firas Zahabi, Bernardo Faria and all the other coaching marvels of today. However, Neil’s approach is quite a bit different from that of his peers. For one, he hasn’t got a black belt in BJJ. For that matter, I think he hasn’t got any kind of belt. Yet, he still coaches some of the world’s greatest MMA fighters in grappling. Oh, and he puts out high-quality digital material in the form of DVDs. And he does it often! So far, none of his titles can be branded a miss. Including his latest release, “The Ground Marshall Half Guard DVD”, which we’ll review today.

It is becoming increasingly easy to learn BJJ from high-level black belts thanks to digital material and seminars. The thing with the digital material is, that you do not get to ask any questions. Some coaches, anticipating this, go over the usual Q&A during their material. However, most people just present their moves and call it a day. Even worse, quite a lot of them omit crucial details that actually make everything work perfectly. It may be due to keeping their secrets from competition rivals or simply looking to charge more for private. On the other hand, a few select individuals, shy away from common behavior and go all in. Neil Melanson is one of those that do things on DVDs the same as in the gym. If there’s one reason to pick up The Ground Marshall Half Guard DVD without reading a review, it should be this one.

ON SALE HERE:
Neil Melanson – The Ground Marshal Half Guard

Certainly, whenever a coach invests so much into his legacy, the material that comes out is going to have a distinct value. What makes The Ground Marshall Half Guard DVD such an extraordinary digital instructional is coach Melanson’s distinct teaching style. Namely, Melanson likes going deep into the things he is focusing on. When I say deep I mean going into details about the details of every detail deep. Yeah, you could say eh overanalyzes things in his instructionals. The result of such an approach is the rarity of finishing a DVD set and remaining question-free. When was the last time you had that happen? Well, if the half guard is something you like doing, or even thinking about starting with it, this is the guide you need.

What makes Neil Melanson stand out from the others of the grappling community? I’d say there are three main traits of the distinguished coach that make him an original.

First up, it is his grappling background. A long-term coach of Randy Couture and the grappling coach at Xtreme MMA and Alliance MMA, Neil’s skill set is in high demand. Yet, you won’t find him in any BJJ history book or see him competing at an IBJJF event. The enigmatic grappler is actually a really proficient catch wrestler, as well as an accomplished Judoka. He is truly an old school grappler, who learned his trade from the likes of Gene LeBell and Gokor Chivichyan. While not formally recognized as a BJJ black belt, he could give even the highest level competitor a run for his money (or his life).

Next, it is his attention to detail. Although I already mentioned this it is something worth revisiting. If you are anywhere past a purple belt, this is going to mean a lot to you. For people leaning towards a conceptual BJJ approach, there’s hardly anyone better than Neil. There are not too many moves per chapter in his DVDs but each and everyone is broken down completely. Furthermore, each chapter is a mini-system of its own, as you can see in The Ground Marshall Half Guard DVD.

Third, it is his grappling style. Neil does not shy away from brutal and painful moves and positions. His rich catch wrestling background is apparent from the way he executes techniques. you can see his partners cringing and be grimacing in pain as he demonstrates the moves at no more than 50%. Scary!

So far, we’ve covered all Melanson’s releases, simply because I am a real fan of the guy. Up until this point, there are 4 titles available out there, each focusing on a crucial part of BJJ. Furthermore, each has catch wrestling solutions to common BJJ problems.

From top position, his breakthrough set, Catch Wrestling Formula is one I still play at least once a week, looking for certain details. The perfect companion to it is the Headhunter Guillotine Series, the ultimate front headlock submission guide.

The Ground Marshall Half Guard DVD

What do you get with The Ground Marshall Half Guard DVD? First of all, you get a 4 Part DVD set to rival others covering the same subject. Secondly, apart from the clear technical quality of the material, the release is also flawless from a production standpoint. Sound, camera work, focus, organization of the material and all that jazz is bang on point. The material is really methodical, just like Neil, making it easy to fit everything together in a complete system.

As any good coach would do, Melanson starts with the basics. He spends a lot of time explaining his philosophy of the half guard position. Furthermore, he also outlines the basic mechanics of the position, as well as his preferred way fo working from the bottom half. he also goes really deep into gripping, which is where he got me hooked. He even uses the grips to get up and sweep, via the cross grip get up technique.

It wouldn’t be a DVD of his if there was no wrestling included. The first thing he attacks from the Ground Marshall half guard is a single leg. Frankly, it is a setup worth giving a try, but I still haven’t gotten to it on the mats.

Here, it is all about being brutally effective from the half guard. Why just sweep the opponent when you can get directly into really nasty attacks from all kinds of angles? A bow and arrow neck crank? Yup, it exists, it is effective and works perfectly off an ankle pick variation. Actually, the ankle lights get up is something Melanson really explores in this part, demonstrating it throughout half of this volume.

Melanson also likes to name his moves either himself, or as old catch wrestling moves. So, the Boston handshake sweep is just as cool and unusual as the name. There’s also a great ankle lace finish that you can use from a multitude of positions, not just the half guard.

I never really thought much of the Octopus guard. Until The Ground Marshall Half Guard DVD came along. Part three is all about Neils take on the Octopus guard, along with a number of really cool sweeping opportunities. The octopus guard opens up so many attacks it’s got me really rethinking my approach to it. Back takes submissions, control, sweeping, everything you might look for in a guard is right there. And it’s really easy to get it, retain it and work from it.

Of course, Neil couldn’t go through a guard based DVD without throwing in his signature submission – the triangle choke. For someone like me, who likes overhook controls, the triangle setup he offers is really helpful.

The last part is also the richest one. ti is like Neil realized that he still had a lot to say, but didn’t spread it out across the other DVDs. it is actually uncommon for him to have a volume with so many chapters, but he doesn’t shorten it on that account. quite the contrary, actually.

Kicking it off are leg locks, of course. From there on, it is more about submissions than it is positioning and/or sweeping. There’s no submission you can think of that’s not covered here. Kimuras, triangles, wrist locks, armbars, guillotines, they’re all available from the Ground Marshall half guard. My personal favorite is the half guard sweep ending with a kneebar. Simple, effective and painful – a true example of catch wrestling for BJJ.

ON SALE HERE:
Neil Melanson – The Ground Marshal Half Guard