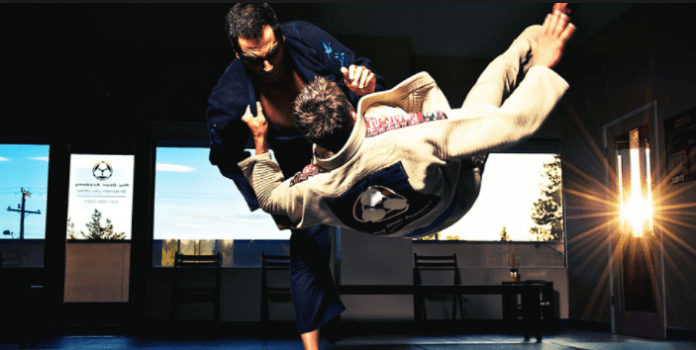 Training takedowns is not something that comes easy for people training BJJ. Those that have no prior experience in stand-up-based grappling martial arts, like Judo, Wrestling, or Sambo, usually develop a slight aversion to takedowns. BJJ offers such a deep and versatile game on the bottom, that people take the path of least resistance. They start rolling from the knees and focus most of their attention to ground fighting. Then, when they’re asked to step into a competition, even though pulling guard is an option, they end up losing the BJJ takedown game. AS far as options go there are no limits. Most takedowns in BJJ are borrowed from Judo, wrestling, and the like. Learning each one on its own is hard enough, let alone trying to do it while training Jiu-Jitsu. So, one great way to approach takedown training is by using combinations of those moves that work the most.

You all know the mantra. Everyone needs to train takedowns for BJJ although very few actually want to. It is the same as with drills, or warm-ups, for that matter. The only people that like training takedowns are usually those good at them because of previous experiences. Wo, they do people in Jiu-Jitsu have this aversion to takedowns? The main reason is probably the fact that they’re just a means to an end in BJJ, unlike other grappling martial arts. While they do bring points, people only see them as a small part of the puzzle. Which is where they’re wrong. They are a part of the puzzle, but it is by no means a small one. However, training them doesn’t need to take up large chunks of your time on the mat. You just need to be smart about creating an easy and effective BJJ takedown game for you.

In terms of takedown effectiveness, different moves tend to work differently in BJJ. Moves that are the highest percentage in their respective grappling arts, may not fare so well in Jiu-Jitsu. This is mostly due to the different ruleset and the aim of the matches. Regardless, you need to have a system that incorporates takedowns from different arts. Moreover, all these takedowns need to tie together easily and logically and also be highly effective in BJJ settings. Since there are quite a few that fit this description, we’re going to introduce another variable. We’re going to choose moves that work at all levels, and that take as little time as possible to master. Now that we know exactly what we’re looking for, let’s take a look at each element of our BJJ takedown combo.

The O Soto Gari is one of the most basic Judo throws. it is actually a part of the Ashi Waza portion of Judo or foot sweeps. There’s a reason why this move, along with the rest of the foot sweeps is taught first. Foot sweeps are a great way to introduce someone to movement on the feet, how to use grips, and take balance away. All these are crucial steps to developing a BJJ takedown game. This is exactly why we base our BJJ takedown system in sweeps and trips, along with a surprise BJJ addition at the end.

The O Soto Gari is simply an outside trip. It works by using two of Judo’s major principles – grip positioning and Kuzihu (off-balancing). In order to arrive at a sweeping position, you first need to take away your opponent’s posture, which disrupts their balance. To do this, you’ll use your basic collar and sleeve grips. once you have the grips imagine that you’re holding a large steering wheel. Then, turn the steering wheel towards the side of the sleeve grip. At the same time, you’ll need to shift your weight towards the leg on the same side. This both provides you with the weight you need to keep your opponent twisted and the space to move your other leg into position.

For the O Soto Gar, you need to stay close to your opponent and aim to have your anchor leg parallel to their outside one. From there, the goal is to swing your other leg forward, and then back. When you swing it back you need to keep it stiff and aim to hit their calf muscle with yours this, along with the broken posture, is going to send your opponent flying.

The inside trip is a great wrestling technique that is also not very difficult to learn. Despite some considering it an advanced move, I find it much easier to master than double or single leg takedowns, for example, especially for beginners.

Similar to the Judo principles, this move requires you to have upper body control via grips and use it to off-balance the opponent. Then, you’re going to place a leg in their path of movement to trip them to the ground.

The over-under upper body control is the usual starting point for this takedown. The goal is to control your opponent and make them lean by pressuring their head with the “under” control. Then you sneak your near side leg in between your opponent’s legs and hook their nearest leg. From there on you just go to the ground, as heavy as possible, while dragging and tripping your opponent along with you.

The BJJ collar drag is not a takedown per say, but more of a sweep. However, in our system, it features a BJJ takedown and a powerful one at that. The collar drag is actually just one of the attacks from a position called the Collar Guard. That, however, is a subject for another article.

The collar drag starts with your butt on the ground. Following the same principles as before, you need grips and Kuzihi before you act. In this instance, you get both by just placing a collar grip on your opponent, and keeping your arm as straight as possible. The basic collar drag requires you to have a cross grip on the opponent’s opposite side collar.

The drag part comes with the help of your hips. For the drag to work, you need to be heavy and explosive at the same time. this is very simple when you do things technically. All you need is a fast hip switch while aiming to place your gripping hand on the mat as violently as possible. This movement is going to pull even the toughest opponent down as it is your entire body vs. their neck. That is a fight that you’re going to win 10 times out of 10.

Now let’s see how all these elements combine together in the most powerful BJJ takedown combo. First of all, you’ll need your grips. Go for the usual collar and sleeve grips, as they’re the easiest to get. Plus, your opponent is most likely to go for them as well, leaving grip fighting out of the equation.

When you get the grips you go for the O Soto Gari. It is the first move of the chain so there’s nothing different from what we described before. The system comes into play when you’re late, or your opponent knows what’s going on. A common thing to happen is for an opponent to pull the leg you’re attacking out and back. This’ll prevent the O Soto Gari but place them in a position for the Inside trip. What’s different here are the grips. Since you still have a collar and sleeve grip you’re going to use them for the trip. Simply place all your weight on the tripping side, pulling on the collar as hard as you can at the same time. You’ll end up with a really powerful takedown that’s virtually unstoppable.

And, in the off chance that your opponent gets that leg out as well, you have one final option. Since the inside trip lands you down on the ground, going back up requires you to abandon and restart. Instead, go down to your butt, release the sleeve grip and collar drag! The only difference here is that you have the same side grip, but it won’t affect the technique. Since the opponent’s hips are far back from escaping the previous two takedown attempts, you’ll drag them down with ease.

Jimmy Pedro and Travis Stevens are Judo phenoms who have one of the best takedown instructionals ever recorded! Get “The Takedown Blueprint” DVD set to learn the most effective Judo for BJJ and tons of more stuff! 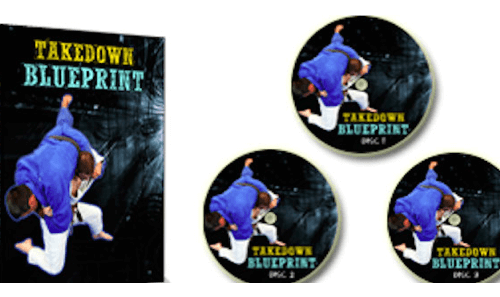