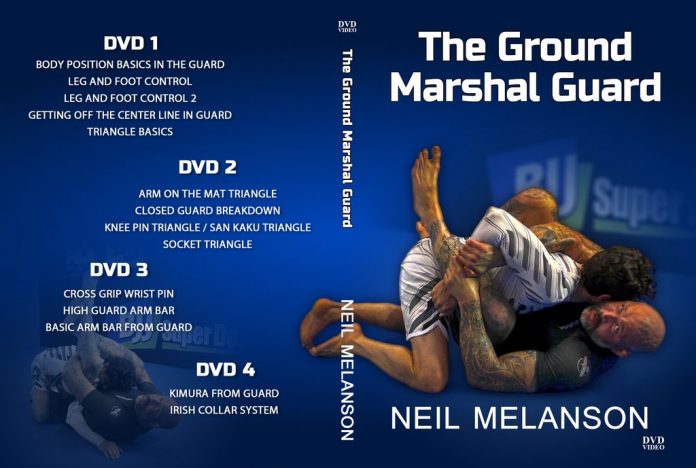 So, I was asked by BJJ World to write a review on a relatively new Neil Melanson DVD. Neil is by far one of the most entertaining and innovative coaches of today, so looking at his content is always a pleasure. I am very familiar with the work of Neil Melanson since I predominantly do No-Gi. So far, all of his instructionals and YouTube videos have been No-Gi which comes as no surprise given his catch wrestling background. Previously, I have really enjoyed his Catch Wrestling Formula DVD so I knew what to expect even before playing the content. I was under the impression that, generally, you can’t go wrong with a Neil Melanson DVD. After this last release, I’m certain of it.

Neil Melanson is one of those coaches that leaves a lasting impression. He is eloquent, detailed and has tremendous knowledge. He is also famous for always coming up with alternative ways of strangling, neck cranking and/or limb tearing. Whatever his focus is, he always delivers effective concepts that universally work against high-level opposition. The Ground Marshal Guard series is no different. It is a classic Neil Melanson DVD release, so full of grappling wisdom that it’ll take months for you to truly grasp it. In this age of countless digital releases, it is refreshing to see one that truly explains grappling concepts, as opposed to only resulting in confusion.

Why Buy A Neil Melanson DVD?

In most cases, if someone recommends me a DVD, I’m essentially going to spend some time researching the person demonstrating the moves. That said, I’m going to save you some time and bandwidth and give you a few reasons why a Neil Melanson DVD is always a smart investment.

First and foremost, Neil Melanson’s pedigree is spotless. Both as a grappler and a coach he’s worked with some of the greatest names in MMA and grappling martial arts. He has a background in Judo, catch wrestling and BJJ, having trained with greats like Gene Lebell and Gokor Chivichyan. He is also a very renowned grappling coach, mostly based out of Xtreme Couture in Vegas. Randy Couture, Gray Maynard, Vitor Belfort, and Chael Sonnen are the names of only some of his standout students.

Furthermore, Neil Melanson has a teaching style as unique as his grappling style. Neil is a big fan of the conceptual approach, as opposed to focusing only on moves. He likes to develop systems based on a position or submission, with countless follow up opportunities to make sure he gets the tap. His teaching style is reflected in the structure of the DVD as well. Instead of 5-minute snippets and 20= chapters per DVD, with Neil Melanson, you get the opposite. There are only a few chapters on each volume, but they all go into high-detail and contains loads of information. Each chapter lasts in excess of 20 minutes and focuses on a system that incorporates a number of techniques.

Finally, since this is a guard-related release, how good is Neil off his back? Well, so far he has developed a few closed guard variations that are not really mainstream. And that is good since the fewer people know them, the more you can use them. AS far as effectiveness goes, there’s not much anybody can do once you get into these positions. Neil is notorious for his ability to submit people from the bottom, especially with triangle chokes. He is a true Ground Marshal and his latest DVD only confirms his pedigree.

It is always good to start things off at the beginning. This Neil Melanson DVD does not start with the assumption that you know the intricacies of the closed guard. Instead, what you can expect from the first volume are the basics. What you probably do not expect is how deep Neil Melanson goes into explaining them. Crucial body positioning tips and correct placement patterns of legs and feet are the main focus for the better part of the first DVD. Neil’s signature submission rounds it off, with killer details on getting to, finishing and adjusting the triangle choke.

Going ahead, it is all about triangles. Now that the basis of the full guard and the triangle have been covered, Neil’s own attack systems come in to play. What I really like is the concept of anticipating the opponent’s reactions in setting up the choke. Rest assured, you’ll learn a couple of triangle variations that nobody but Neil himself can teach you. And he pulls no punches explaining them as well.

Neil’s desire to link submissions into effective systems really comes to the forefront in Disc 3. Again, wrist and arm manipulations are covered in depth before initially moving into the armbar. The two armbar options Neil presents are easily connectable with the triangle setups. Both these submissions systems go back and forth, allowing a grappler to get deeper and deeper into position for the finish.

Finally, the pièce de résistance. Neil’s latest closed guard variation is the Irish collar system. It is simple, it is effective and it is beautiful. High-level control that opens up tons of submissions, let alone sweeps. It is a true masterpiece and one that I rely heavily upon, especially since I have neck hernia problems and can’t handle being stacked.