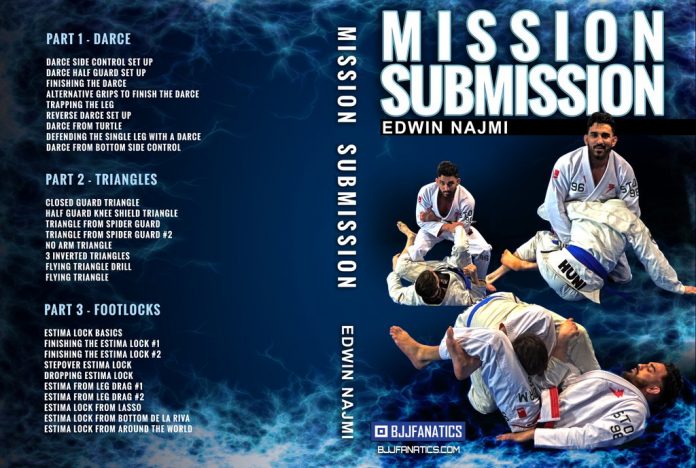 Are you a submission-only fanatic? If you are, you’re going to be stoked about this three-part BJJ instructional by a submission master! Edwin Najmi is one of the best submission artists of today, as confirmed by his recent invitation to the upcoming ADCC in September. So far we know he’s really good at chokes, particularly the D’arce and all its variations. Well, he is also a really accomplished leg locker, as well as a triangle choke expert! If you look at his record, you’ll see that he has submission wins using a very wide array of moves. Now, he shares his “Mission Submission’ instructional with the grappling world, and we offer you an in-depth Edwin Najmi DVD Review right here!

Submissions are the sweetest way to victory for everyone involved in combat sports. While chokes usually get all the credit as being truly inescapable, there’s always a good leg lock to challenge that. The trouble is that most people seem to go for one or the other, using only 50% of the highest percentage of weapons. Najmi is a grappler that uses everything at his disposal, be it chokes or foot locks. doing this Edwin Najmi DVD review revealed that he is extremely good not only at single submissions but at joining everything together as well. Time to forget about systems and elaborate strategies and learn how to submit everyone from anywhere at any time!

Edwin Najmi burst onto the BJJ scene as a BJJ brown belt European and World champion in 2015. Since then, he moved on to battle some of the world’s best black belts, adding IBJJF Pans Champion at black belt and Five and ACB Champion to his ever-growing list of accomplishments. The 27-year-old still has a lot more to prove to the grappling world, though, as he is just starting. We certainly can’t wait until he showcases his submission skills at the 2019 ADCC.

before we get into the “MissionSubmission” Edwin Najmi DVD review, a few more words on Najmi’s submission skills. Najmi started grappling quite early, after play-wrestling with his cousins. A Gokor Chivichyan affiliate Judo dojo was his first gym. Since they are notorious for dedicating a lot of time to groundwork, Najmi soon became really interested in that part of the game. This led to him joining Romulo Barral’s Academy in California. From 2009 to this day, Edwin has stayed loyal to Romulo and Gracie Barra.

Submitting a black belt at Copa Podio when he was a brown belt himself got the grappling world interested in Najmi. From there on, Najmi got a lot more opportunities and did not disappoint. His submission skills brought him 24 of his 40+ wins, with his signature D’arce leading the way. Conversely, he has only 2 submission losses so far. The Romulo Barral black belt also took the EBI stage, and we would gladly see him back, particularly under CJJ rules.

Najmi’s “Mission Submission” BJJ Instructional contains three parts to it. Unsurprisingly, they’re all about Edwin’s favorite submission holds. he starts off with his trademark D’arce choke, which he can wrap up from literally everywhere. The information in this volume is second only to his full-blown D’arce instructional DVD.

The second and third parts address triangle chokes and foot locks, respectively. What you can expect is to see details on both that you’ve probably never even knew existed. Moreover, Najmi has an extensive experience grappling under IBJJF rules, so no illegal moves in this instructional. However, Najmi does pay a lot of attention to the one legal foot lock that’s more devastating than most illegal ones anyway.

Najmi likes to progress through different variation of the same submission move until he achieves the tap. The best thing about this Edwin Najmi DVD is that he allows you to work the progression, but also switch back to any of the previous variation at all times. You can see how this turns into a real submission hell for your opponent. Even better, it all involves attacking from a common starting position.

The first “Mission Submission” volume starts off directly in the deep end. Najmi opens with his top side control D’arce setups which is going to have most people staring in awe. Yeah, it is that unusual. Also worth extra attention are Najmi’s details on how to finish the D’arce. As I really like this move, I find that this is often the area most people struggle with. having multiple options, and even innovative alternative grips to finish certainly does make the job easier.

Talking about Najmi’s innovation in the D’arce domain, he also offers a reverse D’arce choke which is going to blow your mind. Wrapping things up are a few D’arces from the position that people do not expect them from. Well, ok, the turtle one is not that strange. However, the D’arce single leg counter and bottom side D’arce will give you the element of surprise for sure!

Triangles in this Edwin Najmi DVD start from the closed guard, much like in fundamentals class. Where they end though, will have you really surprised and eager to give it a try. The triangle is a submission that’s not easy to get as most people are expecting it, and have a lot of defensive options. Najmi’s take on the closed and half guard triangles takes care of most counters and really improves the finishing rate.

My favorite from this volume is the no arm triangle, which, for someone with short legs like me is a godsend. Najmi’s triangle expertise also extends to extremely detailed spider guard setups. Not surprising, seeing as he is a spider guard aficionado. Inverted triangles apart (all three of them) the real highlight of this DVD are Najmi’s flying triangle setups. Let’s not forget that he has had great success with them at the black belt level, so pay attention!

Finally, we arrive at everyone’s favorite modern BJJ submission – leg locks. Well, Najmi does really narrow it down by choosing the only one-foot lock to work with – the Estima lock. If you’ve never had the (dis)pleasure of being caught in one, you have no idea how brutally painful it is. Well, now you have a whole 10-chapter DVD to learn how to set it up against anyone!

Since the move is something not a lot of people do often, Najmi starts with basic mechanics, that include several finishing options. This sets the stage for some crazy setups. Most of the initial setups are from the top. This includes a dropping Estima lock and several options from a leg drag pass. The caveat of this volume has to be the Estima lock against the always dangerous lasso guard. keeping things interesting, Najmi also offers a bottom Estima lock setup, this time from the De la Riva guard.

I’m a D’arce and foot lock guy myself, so you can imagine how much I enjoyed this particular Edwin Najmi DVD review. Still, it’s not as nearly as much as I get to enjoy what it taught me. This Edwin Najmi DVD is a must-have for everyone! You’re bound to find a move you love among the three categories covered. What’s more likely, is that you’ll love them all!