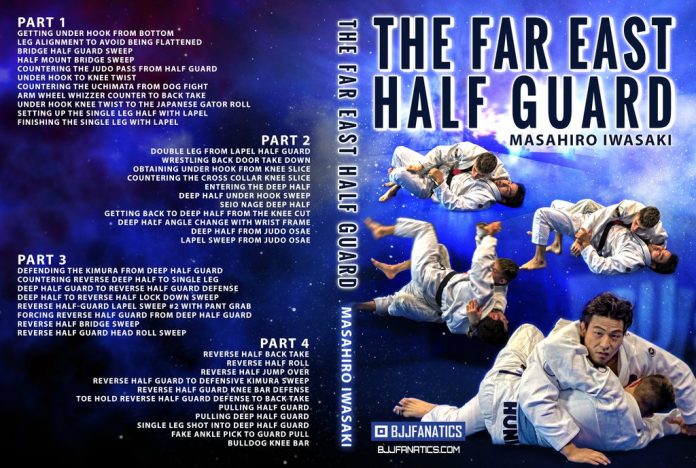 Did you know that the half guard came to be purely by accident? When a BJJ legend in Roberto “Gordo” Correa injured a knee, he had to think of a way to spare it while rolling. Since he liked playing guard, he decided to trap just one leg, so that his injured leg can rest. His experiment resulted in the arguably best guard position Jiu-Jitsu has to offer. Even though it may not be as secure as the full guard, it offers more transitions and movement, which in turn, mean more opportunities. After Gordo’s efforts, many people started experimenting further with the half guard. It goes on to this day, and this new Masahiro Iwasaki DVD is no different. It offers new insights into an old position, with plenty of never before seen information. If you’re still not convinced about it, read on for a detailed review.

The Deep Half Guard Magician Iwasaki

Never heard of the man behind the Masahiro Iwasaki DVD? Then you must not be paying to much attention to the highest level IBJJF tournaments. Iwasaki is one of the best Japanese grapplers of today and a member of the famous Carpe Diem Tokyo Academy. He is a fierce competitor that’s only beginning to conquer the grappling scene. The Asian and Japanese champion is now moving on to conquer the world, with notable medal-winning performances at the Europeans so far.

Masahiro’s BJJ story begins with due to Pride. During his teenage years, the 30-year-old was heavily involved in Japan’s national sport of Karate. However, after seeing Minotauro defeat Bob Sapp got Iwasaki into BJJ at 15. He started in Kobe, under Yasuhiro Miyamoto, who got him as far as a brown belt. After getting his black belt 9 years ago from old-school BJJ legend Marco Barbosa, he went on to join Yuki Ishikawa’s Carpe Diem team. Given that this is a highly competitive team, Iwasaki has been extremely active on the competition scene.

Currently, Masahiro has notable victories over the likes of Edwin Najmi, Renato Canuto, Gilbert Burnes, Andre Monteiro, and others. He actually fell just short of winning the Europeans in 2018 where he lost to Michael Langhi in the finals via an advantage. He has been demolishing the lightweight division with his half guard magic. his favorite position is the deep half guard, from where he is next to impossible to beat. However, Iwasaki’s success is down to the fact he likes to play multiple half guard variations and is equally good at all of them.

Who is the “Far East Half Guard” Masahiro Iwasaki DVD intended for? Well, this one is really great for anyone that’s involved in BJJ. Iwasaki has so much information in this one, even black belts will need a couple of months at least to really understand it all. however, at the same time, Masahiro starts at point zero, explaining the half guard from it’s most basic foundational aspects. As the instructional progress, so do the technical aspects of it. Still, Iwasaki never offers something that’s overly complicated or unlikely to work against opposition of all levels. On the contrary, everything is as simple as Gordo’s half guard, but ten times more effective.

Iwasaki’s take on the half guard is one that not many modern grapplers take. People trying to innovate and put out new material is great, but it often becomes very individualized. As such, not everyone’s half guard game is suitable for everyone. Iwasaki’s game, on the other hand, is perfect for whoever decides to learn from this Masahiro Iwasaki DVD set. Male, female, tall, short, heavyweight, roosterweight, everyone will find the game easy to understand and even easier to apply.

Across four very rich volumes, each running at almost two hours, Iwasaki offers basic underhook systems, deep half magic, the most comprehensive take on the reverse half guard and some nasty submissions from all of the above. Everything is neatly organized into chapters and sections, and it all makes a lot of sense. Sound and video quality are pristine and Iwasaki speaks perfect English, although with a heavy Japanese accent.

Iwasaki begins with explaining the one half guard concept that’s around since Gordo’s first efforts – the underhook. Getting the underhook from the bottom is the first chapter, and it is the most important concept you’ll learn in this Masahiro Iwasaki DVD. Another crucial concept is how to avoid ending up flat on your back, and Masahiro has the solution.

A few simple sweeps based on the underhook position are the first offensive moves of Iwasaki’s half guard. There are also some neat pass prevention systems that’ll foil everyone’s passing attempts. What it really found useful is the dogfight series, where you’ll have the upper hand regardless if you’re on top or bottom of it.

Some lapel work that opens up knee twits, gator rolls, and single leg takedowns brings the first volume to a close.

In part 2 Iwasaki moves on to his favorite deep half guard. Here he starts with a really really useful sweep he calls “the wrestler’s back door takedown”. If you’re a smaller grappler, this move is going to fast become one of your favorites.

The way Masahiro likes to enter the deep half is through the knee slice. He does offer further entry options, but the few from the knee slice are very high percentage and safe ones to use. As soon as entries are covered, it’s time for some high-level deep half action. Masahiro offers a very simple hook sweep that he might as well call a 100 % sweep. From there one, he shares his “Seio Nage sweep” which is a completely new move.

What’s also unique about this instructional is that Masahiro offers ways of recovering the deep half after you lose it. There’s one particular way of doing it from the knee cut that’s really going to catch your attention. A couple of seep half sweeps from the Judo Osae wrap this one up.

This is where things really get interesting. I’ve never been a huge fan of the deep half guard, but I do use it when opponents are particularly difficult to sweep. That said, one problem area of the deep half is the Kimura opening the top person has. Well, not anymore. Iwasaki has a simple solution that takes care of this particular issue.

As he moves along, Masahiro addresses another huge deep half problem 0 the reverse half transitions. the reverse half was not such a dangerous position before leg looks, but now, it is one of the worst positions you can end up int. This Masahiro Iwasaki DVD is a blueprint on how to counter, nullify and escape the reverse half, ending back in the deep half. Moreover, he offers ways to prevent people from ever getting to it.

What’s really cool is that at the end of this volume, Iwasaki uses the deep half to arrive at the reverse half guard position himself. A few easy sweeps show the way to ending up in a very dominant position on top.

The final volume of this incredible half guard DVD set focuses on attacking from the reverse half guard. As I said before, it has become a very powerful position after leg locks changed the landscape of Jiu-Jitsu. However, the reverse half offers many more opportunities than just lower body submissions.

Iwasaki starts with a back take from the reverse half, followed by a reverse half guard. A few defensive concepts are next, dealing with common threats like the Kimura and the kneebar. There’s also a smooth back take off a toe hold defense.

For the final portion of his “Far East Half Guard” instructional, Iwasaki takes things to the feet. From there, he offers a few ways of pulling half guard when standing. He also covers a few “fallbacks” that’ll guarantee you and into the deep half after certain takedown attempts, like the single leg for example. The final chapter is about the bulldog kneebar, which is something you’ll need to see to believe!

All things in consideration, this is one of the best half guard instructions out there. It doesn’t only cover half guard fundamentals, but also simplifies the deep and reverse half guard variations. It also covers everything, from entries to recovery and retention and even counterattacks.  Iwasaki likes to show things without wasting any time, so every chapter is very precise and to the point. Pick the “Far East Half Gaurd” Masahiro Iwasaki instructional up. It’ll give you an edge from the bottom that nobody is going to expect, or be able to do anything about!