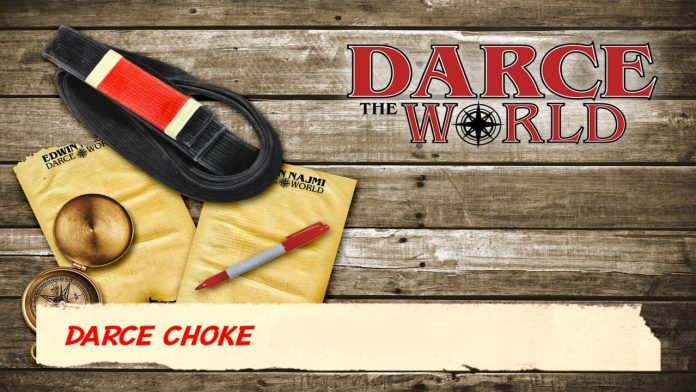 Edwin Najmi is a Gracie Barra competitor that is as legitimate a black belt as they can get. He is still at the young age of 26 and already a world-famous grappler. Even better he is a submission artist, one that is particularly fond of chokes. Everything from triangle chokes, through back chokes to the D’arce, is included in his arsenal. Now, there’s a complete Edwin Najmi DVD dedicated to the powerful D’arce choke.

The D’arce choke is one of those chokes that can work for everyone. Yes, you read that right, everyone., It doesn’t matter if you have short arms or the opponent has a massive neck. As long as you keep things technical, the D’arce choke is going to put anyone to sleep. Edwin Najmi is no stranger to this choke, which is one of his strongest grappling weapons. The latest Edwin Najmi DVD instructional focuses on exactly this subject: the D’arce choke. Not only that, but Edwin goes deep into the world of the choke, showing you how you can D’arce the world.

Najmi’s recent success at various top-level competitive events, especially n the No-gi scene makes him the perfect new-school D’arce choke expert to learn from. Edwin Najmi has a very attacking game, always hunting for the strangle. He is a lightweight competitor who has a great build for the D’arce choke. However, the Edwin Najmi DVD on this choke also covers how people of different body types can still get the tap. I am a featherweight, for example, and I don’t have the longest arms in the gym. Very often I need to switch up my D’arce finish and this Edwin Najmi DVD has made me much more efficient with it.

Edwin Najmi is one of the top prospects in grappling at the moment. At 26 years of age, he is nearing his prime and is definitely one to watch in the near future. What is more impressive about him is that he is staying true to his love for chokes in the modern era of leglock frenzy. His prowess with every kind of choke, from triangles to front headlock chokes is beyond question. That said, he has some pretty special D’arce knowledge that he finally shares in his latest Edwin Najmi DVD.

Edwin is a Romulo Barral black belt, competing under the Gracie Barra banner. He is considered to be one of the most talented lightweights of his generation. Najmi progressed through the ranks of BJJ with great speed, racking up multiple notable wins along the way.

Najmi discovered the art of Brazilian Jiu-Jitsu through Judo. Najmi’s original Judo instructor was a student of Gokor Chivichyan himself, so he worked a lot on the ground fighting aspect of Juod. This got a young Njami interested in this area of grappling and he consequently got into BJJ. Lucky for Njami, a Romulo Barral ran Gracia Barra academy was just around the corner. In only 6 years since he started, Najmi got his black belt in 2015.

Najmi has multiple World and European titles at brown belt. His black belt pedigree, is not less impressive, with notable medals from the IBJJF Worlds, Pans as well as the UAEJJF Abu Dhabi Pro.

So, what exactly does Najmi bring in his “D’arce the world” release? The answer is everything, at least in connection to the D’arce choke. Edwin did not spare any details while filming this instructional.

In terms of structure, there’s a clear progressional path throughout the disc. The DVD is made up of a single volume, dedicated to 21 chapters. The grouping of the chapters is in accordance with the specific area of the choke that’s the main topic. Chapters include fundamentals of the choke followed by Gi setups and variations. Further along, Najmi demonstrates specific scenarios in which the D’arce is a great option to counter an opponent’s attack. A few modifications of the D\arce choke complete the attacking part of this Edwin Najmi DVD.

Before summarizing everything, Najmi devotes a few chapters to the counterattacks, or rather, defense destruction. he outlines the chokes you can do off the D’arce when an opponent is intelligently defending themselves.

The first 4 chapters are all dedicated to the fundamental principles behind the D’arce choke. After a short introduction, Najmi gets straight to work. It is important to consider the D’arce choke primarily as a position of strong control. Only when you can stay in the position for a long time, disrupting all escape attempts, you can think about finishing. This is going to make sure that you do not rush into the choke and lose both the submission and the position.

One of the most common problems with the D’arce is the arm of the opponent, which they can use to create trouble. Najmi offers great ways to clear the arm so that you can keep working on the D’arce. Not only does he offer ways to remove the arm but also how to pin it in place. This is a crucial step to improving your Da’rce choke. A palm to palm D’arce variation is also included in addition to the traditional finish.

The Gi is actually a very useful tool to improve the D’arce if you know how to utilize it correctly. What Najmi shows is how to use the sleeves to your advantage. Even a T-Rex could finish the D’arce with these details! Furthermore, there’s a lapel variation that is going to exceed your expectations. it is essentially a one arm D’arce that very few people can see coming.

As the DVD is progressing, Najmi goes deeper and deeper into D’arce territory. Given that you’re all familiar with the previous content, this is where Njami offers practical advice. The D’arce is not only a powerful choke but also a great counter against people who are particularly savvy in takedowns.

Najmi paves the way to counter most wrestling attempts with the D’arce. There are a few counters to common takedowns, like the single and double leg. There’s also a great way to hit the choke off a sprawling defense, for all you super technical nerds out there. Even better, there are a couple of great ways to open up that pesky turtle defense and get the sub right away!

The icing on the cake is the no-arm choke and near side D’arce. These two variations on the main subject are worth buying the DVD by themselves!

As time goes by and you get good with the D’arce, people are going to start countering and blocking your attempts. Well, worry not because Edwin has you covered. Whichever defense you might come up against, there’s a choking solution for it.

The Secrets Of the Peruvian Necktie For BJJ: https://bjj-world.com/peruvian-necktie/

Najmi offers a few cousin-chokes to the D’arce to make sure you get the tap, even against experienced opposition. The Peruvian Necktie is straight there off any D’arce if you know how to get it. You could also go for a fake Guillotine and still finish the D’arce. Or just go for the Guillotine. Finally, there’s an inverted triangle setup that’s going to have you running to the academy to give it a try!