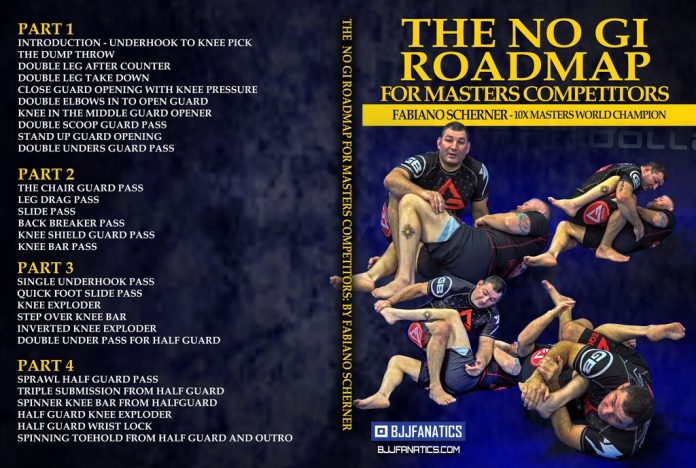 It’s that time of year when Master competitors are starting to wake up from their slumber. The European Masters Championship is just a few months away, followed closely by the World Masters Championship. Not to mention the master’s divisions in every IBJJF/UAEJJF event held across the globe. Contrary to popular belief, masters divisions are not the “easy” divisions. Try rolling with older grapplers and you’ll see what I mean. With the gi, masters that know how to be efficient are just as dangerous as adult competitors. Without the GI, however, they tend to all short. No-Gi is much more fast-paced and “scrambly”, which doesn’t suit older grapplers. “The No-Gi Road Map For Masters Competitors” is Fabiano Scherner DVD that is going to make masters grapple better than adults even without the Gi.

Whenever any of the older grapplers issues a video instructional, people often mistake it for being intended for masters only. That’s not the case with most of them, and especially not this Fabiano Scherner DVD. Fabiano is one of the highest-level black belts around and an incredible No-Gi grappler. The 47-year-old is as dangerous as any 24-year-old, especially when he gets top position. In his DVD he offers masters grapplers a real “fountain of youth”. Well, at least when it comes to grappling. His “The No-Gi Road Map For Masters Competitors” DVD set is just the formula you need to dominate everyone in your masters’ division. Who knows, you might even find it so good, that you give the adult divisions a try again.

Mr. Scherner is one of those old-school BJJ guys that scares the living daylight out of people. At over 220 lbs, it’s hard not to. He is big, strong, extremely technical and incredibly efficient. On top of it all, he enjoys pressure positions and playing a top game. Oh, and he does like kneebars and other painful submissions a lot. As if that’s not enough, he is also a 10 x Masters World Champion. Giving the new Fabiano Scherner DVD another thought now?

Fabiano was born in Brazil, in 1972. He lived in the Rio Grande do Sul, where he started training Taekwondo. Very soon, he became interested in MMA, which naturally, led him straight into a BJJ Academy. However, BJJ seemed to be much more captivating to Scherner than MMA, and he stuck with it. He actually got to his purple belt in less than two years, which is a statement in itself. A year and 9 months later, he got his black belt from Murilo Bustamante and Luis Roberto Duarte. As a black belt, he also got to compete in MMA, including the UFC.

Today, Fabiano “Pega Leve” Scherner is one of the Gracie Barra standouts and a third-degree black belt. Funny enough, his nickname translates to “taking it easy” which is contrary to how rolling with him feels. He got the name because his coach always sent the students looking for a “light roll” to spar with Scherner. He loves attacking from the top and has one of the most pressure-heavy games in the whole of grappling.

The first thing to know about “The No-Gi Road Map For Masters Competitors” is Fabiano Scherner DVD is that it is not a resource only intended for masters. While everything in it is going to benefit every masters’ grappler immensely, it also has great information for younger athletes. Picking this instructional up early and applying the principles you learn to your game is going to turn you into a seasoned grappler fast. Not to mention getting you ready for inevitably competing in the masters’ divisions.

The DVD set contains a total of four volumes, each addressing specific top game areas. Why the top game? Well, it is the best place to be in, particularly in No-Gi when you’re on the wrong side of 30. Fabiano’s rich teaching and competition experience also make him an incredible teacher. He knows how to deliver what’s important in a cohesive manner and make people focus on what’s important. All in all, a key video instructional for anyone that like to train and compete in No-Gi.

DVD1 – Takedowns And Dealing With Guards

First up, Scherner offers his take on how grapplers should approach grappling. In particular, he offers competition tips, which include mindset and preparation. From a technical standpoint, he offers his reasoning behind the insistence on staying on top. It all makes a lot of sense, drawing you to watch further.

It all starts on the feet, with a very cool way to take someone down – the dump throw. Straight off the bat, it’s clear that this Fabiano Scherner DVD is going to be full of unexpected moves. Some more established moves, the likes of double leg takedowns are next, with key details and modifications.

Once, down, the most annoying position to be in against a masters grappler in No-Gi is the closed guard. Scherner offers the remedy, in the form of a few really efficient guard openings. Of course, they all include lots of pressure and massive amounts of pain for your opponent. After opening the guard, Fabiano’s favorite way of passing is via the double scoop / double-under pass. He goes over both in very fine detail.

The second volume keeps going, offering a lot of variety on the subject of guard passing. One thing about Fabiano is that he has an ultra simple game based on fundamentals. So, it’s no wonder that he takes basic principles and uses them to pass any guard. The chair pass is one of those passes that I never figured out because it is so obvious. You know what I mean.

The quintessential leg drag moves things into the direction of open guard passing. Once again, you’ll figure out the key and often overlooked details. One is the direction of dragging the leg, as well as the optimal spots to grip. Further along in the DVD, Fabiano goes over some pain-inducing passes like the “backbreaker” and the knee bar pass. This latter is pretty much self-explanatory and acts as an introduction to the next volume.

DVD 3 – Knee Locks From The Top

This DVD is going to revolutionize the way you see leg locks, and in particular, kneebars. After a couple more passes (single underhook and quick slide) Fabiano offers his take on some knee based submissions. Kneebars apart, he also uses something he calls “the knee exploder” I doubt you can find this stuff anywhere except in this Fabiano Scherner DVD. Form a basic kneebar standpoint, he offers incredible finishing detail. Also, there are some setups that’ll have you looking like the hottest prospect form the adult divisions. The step over kneebar setup and the inverted knee exploder are the perfect moves to get you fast and painful victories.

The final volume of “The No-Gi Road Map For Masters Competitors” DVD is all about using your top position to submit. Moreover, Fabiano offers direct submission routes off of guard passing. No messing around here, as the old school concept of always having a threat is the main theme. Most submission options here come in combinations of two or even three moves that’ll easily beat even the best of opponents.

The knee bar and Fabiano’s knee exploder feature heavily again. However, this time he throws in some other moves into the mix as well. His spinning toe hold from top half guard was actually the first chapter I played from this DVD set. And there’s also a wristlock in there that’s devastating as any other BJJ submission you can think of.