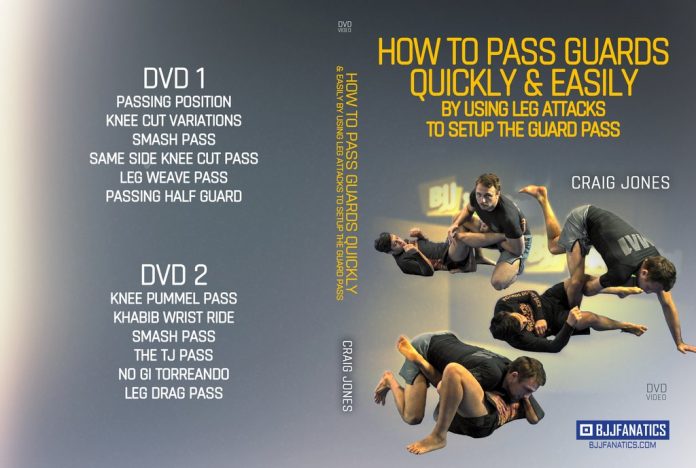 Craig Jones is not one to waste time, that’s for sure. The Australian phenom has been busy both at the competition and the coaching scenes alike. Apart from beating everyone that stood across him, he also managed to release a huge number of Brazilian Jiu-Jitsu DVDs. It seems that every time he beats a high profile opponent he has to do a DVD about his moves. If only all the other great grapplers we’re like this. The latest Craig Jones DVD is out and about. After all the leg locks, back takes, Z-guard and Triangles it’s time for something different. It is time for a guard passing Craig Jones DVD set.

2018 has been a marvelous BJJ year so far. There were awesome EBIs, new promotions like Kasai Pro featuring major upsets, as well as the IBJJF World Championship. Oh, and there’s also that John Danaher leg lock DVD we’ve all been drooling over. But not only that. It’s been only 6 months and this year is already bursting with Jiu-Jitsu related content. BJJ DVDs are all around us, making it really difficult to know what’s good and what to skip. If there’s one legitimate filter to point you towards high-quality digital content it’s the man (or woman) demonstrating the moves. So when that grappler is an ADCC and EBI standout and IBJJF Champion, you’ll undoubtedly be getting your money’s worth. And, when it is a Craig Jones DVD, you can be certain that you are getting the first-class material.

Craig has so far provided us with all of his favorite match-winning moves so far. From the leg locks that brought him to the EBI final in less than a minute combined, to his triangle magic that brought him a World title. Craig covered everything so far. Or at least we thought. We already know that he is anything but a one-trick pony, yet we never think of him as a guard passer. Well, if the latest Craig Jones DVD is anything to go from, he can pass. Actually, not only can he pass, but he uses passes to set up submissions. Yeah, be ready for even more leg locks in this Craig Jones DVD dubbed: How To Pass Guards Quickly And Easily.

What is there to say about Craig Jones that is not clear by now? He is an Australian BJJ black belt, based out of Melbourne. His home is Lachlan Giles’ academy called Absolute MMA. His coach, Lachlan is a Danaher-like BJJ wizard, very similar to Firas Zahabi in his grappling approach. Lachlan’s most prized student, Craig, is a true testament to Giles’ Brazilian Jiu-Jitsu prowess.

In terms of accolades, Craig has more than grapplers with decades of experience more than him. He destroyed standouts like Maurilo Santana and Leandro Lo in the ADCC. He also gave Gordon Ryan a run for his belt in a teeth-grinding EBI final that’s hardly going to be matched soon. And this is all after his utter dominance on the No-Gi IBJJF scene.

EBI, ADCC, Kasai, ACB, Submission Underground, you name the promotion and we’ll show you a reason to get a Craig Jones DVD. Craig is not only a world-class grappler but also a world-class coach. After all, all of his previous DVD releases are nothing but successful. Of course, his Down Under Leg Locks DVD is probably the most sought after and debated one. However, his other releases also demonstrate how valuable a resource a Craig Jones DVD is. If you’ve been collecting his releases, you already have a great gameplan to follow. You have a detailed Z-guard guide, slick back takes, unstoppable leg locks and triangles from hell, to name a few. No, it’s time to switch tactics and address the standing part of the game. In particular, it’s time for some wicked guard passing!

When you rad double trouble, you’re most likely thinking of Danaher’s leg lock principle. As you should be. However, in terms of the latest Craig Jones DVD set, this is in a slightly different connotation. Namely, Jones’ focus during the instructional is not only on guard passes but leg attacks as well. This is a Black Belt way of approaching things and if you feel it is too much for you can certainly use just a portion of it.

What you get in this Craig Jones DVD is a complete breakdown of some of the most useful passes in BJJ. If you’re lacking in the passing department, you can, by all means, stop there, and simply use this release as a passing resource only. However, if you’d like to further your game, then embrace this DVD in its entirety.

The full name of the Craig Jones DVD is “How To Pass Guards Quickly And Easily By Using Leg Attacks To Set Up The Guard Pass”. The title says it all really. What it doesn’t say is that you can go in both directions. IF you’re really gunning for the pass, you can use leg attacks to set up unstoppable passes. However, if you’re stuck in an opponent’s guard you can always play the game in reverse. Go for a pass and end up in a leg lock instead. Your imagination is the only limit, as Craig provides everything you need to pass or submit an opponent.

So, let’s get into the Craig Jones DVD itself. First and foremost, this is a two-volume set. All the content is divided between two discs, each covering a specific array of techniques. There are six chapters in each volume, which is considerably less than your classic Craig Jones DVD. What this means, though is not less material, but more precise instruction. Fewer chapters mean larger ones, which inherently, means high-level detailed instructions.

Before we go into the specifics of the content itself, a couple of words on the technical aspects of this release. After John Danaher’s first release, the grappling community lives in fear of badly produced DVD releases. Rest assured that this Craig Jones instructional is a flawless one. Camer angles are tight and precise, the sound is clear and the overall production is as good as it can possibly be. That said, time to peek into the contents.

True to his coach’s conceptual approach to Jiu-Jitsu, Craig starts by talking about the basics of guard passing. He focuses particularly on the positions you need to look for when attempting to pass. This is probably the most important part of this instructional, so listen carefully.

The first passing sequence covered is the knee cut pass. As regular as it sounds, much like with the z-guard, Craig adds a different taste to it. Those that love this pass will find everything they need here. Those that focus on other passing options will rediscover why this pass is so effective at the highest levels.

In a natural continuation of things, the knee cut pass is followed by the leg weave pas sand some half guard passing principles. Yeah, I’m not forgetting about the leg locks. Each of these techniques is closely tied to a toehold, ankle lock or even heel hook threats that open up the passes like nothing you’ve ever experienced before!

The second volume of this release goes into some still basic, but yet a bit more advanced passing strategies. It all starts with the pummel pass, only to continue in a Craig Jones special. The Khabib wrist ride is something you most likely do not know. it is also the one thing that you’ll fall in love with at first try. It works, and it does so against much more experienced opponents.

The smash pas is another one that gets a lot of attention from Craig. This is a crucial pass in BJJ and a staple of the pressure game. Craig gets down and dirty with it, providing incredible details and setups. Furthermore, it ties directly into the next chapters of this volume.

The TJ pass, the Torreando and the leg drag round off another great Craig Jones DVD. What’s so special about these common and even “over-used” passes? It’s the Craig Jones factor. You get a different way of approaching traditional passes. You get a system that works in both Gi and No-Gi. And finally, you get amazing details and you get original setups. Simply put, you get everything you need.

If you’re interested in buying Craig Jones DVD – How to pass Guards Using Leg Locks you can buy it HERE. And make sure you check the list of techniques and free videos from Craig’s newest DVD HERE.