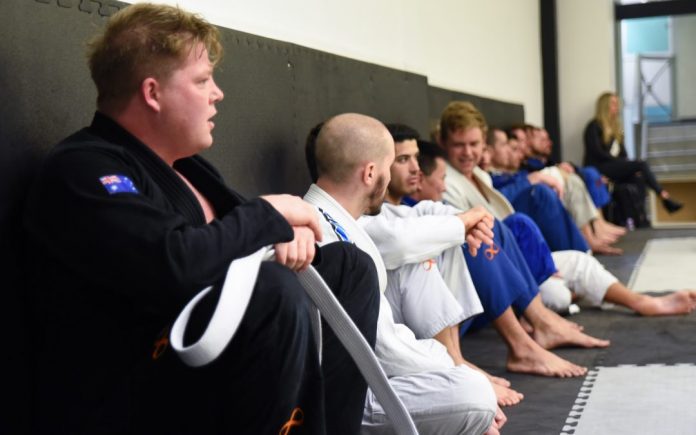 Just the other day I was explaining the very basics of BJJ to a brand new white belt beginner with no prior martial arts experience. After 7+ years in the sport, I caught my self-taking a lot of things for granted. It is easy to forget how confusing it all was in the beginning, even though I had grappling martial arts experience. Stepping on the mats, a white belt’s expectations are very different from what they’ll get. Getting your limbs twisted and bent is not as nearly unsettling as the feeling of utter powerlessness when getting choked. getting around the confusing and difficult white belt period requires putting the hours in, both on and off the mat. Yes, digital instructionals can help, but no one has to be pickier than a beginner white belt. After all, not all instructionals are the best DVD for white belts to learn from.

The first priority of a white belt and any beginner in grappling martial arts is orientation. There’s no substitute for learning from an experienced instructor. The only way to learn BJJ is to do BJJ. However, you can’t be doing BJJ all day, every day. Even if you can, the instructors might not. So, how do you go about expanding your knowledge without getting lost in this very sensitive period? Grab yourself a few beginner DVDs, but be really careful. If you start off with Eddie Bravo’s stuff you’ll only get lost an nothing is going to make sense. When trying to figure out what the best DVD for white belts is, the most important criteria is simplicity. A white belt should look to expand knowledge only in the areas of BJJ they’re learning about on the mats. Period!

Now that it is clear that nothing but the fundamentals should be the subject of choice for a white belt, let’s go deeper. Even amongst the basics, there are so many titles to choose from that even a black belt would be confused! So, to give beginners a fighting chance, we decided to dig through the digital mines and retrieve only what really makes sense. In order to reduce the clutter, we made a selection of the top white belt instructionals out there. Which one is the best DVD for white belts and beginners? We’ll expect to hear the verdict from you, once you’ve gone through all of them.

Digital learning is a valuable tool for any grappler, regardless of level. It is very important to know what you’re looking for when selecting an instructional. For one, skip the YouTube videos, webinars and or partial instructions. To lessen the confusion go for structure. A DVD should make sense in terms of how stuff area presented. If you can keep up with it while understanding how things link up, you’ve struck gold. Just be sure to demonstrate patience and not watch the last disc straight away in search of cool techniques. There are no cutting corners in BJJ, whether in real life or digital!

The staple of BJJ is the closed guard. The ability to fight off one’ back is what discerns Jiu-Jitsu from all other grappling martial arts. It is always involved in the first class in academies across the world. The closed guard is a very powerful position because it is very simple. As such, it has to be among the first things a white belt learns. It would be hard to skip over a good closed guard instructional when looking for the best DVD for white belts!

When looking to reduce the clutter is always to have a BJJ world champion as a major selection criterion. Since Bernardo Faria thicks that box (5 times, actually) we decided to put his closed guard instructional on top of the pile. And for a good reason! Faria’s material is comprehensive, understandable, and most importantly exactly as detailed as required for beginners He goes over every important point without causing confusion. Over 4 discs, Faria explains how to get to the guard, how to maintain it and attack from it. Although there are some advanced moves thrown in the mix, you can look at them as a preview of what’s coming in BJJ. Stick to what Bernardo demonstrates along with what you learn in class, and you’ll progress to the next level in no time!

This one is a really cool one, to be honest. It is aimed at white, blue and purple belts, so it contains moves that might just be out of the regular white belt’s reach. There’s a Catch 22, however. White belts are going to roll with all other belts in an academy. That’s given. So, when they get in a roll with a purple belt they’ll often find themselves in situations they do not understand. Well, Ferreira singled out two of these areas and made them simple.

In the series, Ferreira focuses on the leg lasso guard and the sit-up guard. While the former is a bit advanced, the latter is definitely in white belt territory. The trick is that he not only provides information on working with both guards but also how to deal with them. His passing of more complex guards is impressively put together so that anyone can understand the basic principles. Look at it as an investment – you’re learning how to deal with the more complex guards at the beginning of your Jiu-Jitsu journey, so that you’ll know how to use them when you’re a blue belt.

Who better to learn the fundamentals from than a member of the Dirty Dozen? If you have no idea what I’m talking about, they’re the first 12 American black belts in the world. Chris Haueter is a distinct member of this group, which speaks volumes about his experience as a grappler. The Machado black belt has always been a fan of the root style of BJJ. He likes to keep things simple, efficient and tight. And that is exactly what he delivers in his amazing DVD series. The best DVD for white belts? This might be the best DVD fro grapplers overall!!!

Haueter has a self-defense thread running through all the moves he demonstrates, staying true to his old school Jiu-Jitsu background. The obligatory closed guard is present yet again, albeit this time from a different perspective. Chris demonstrates only the basic attacks every white belt should know, like the armbar and cross collar choke. For those that think the cross collar choke is waste of time, I’ll refer you to Roger Gracie‘s success with it. Point made. Apart from working form the guard, Chris Haueter demonstrates how to destroy it and various open guards in his passing instructional. Staying with the flow, he then reveals crucial secrets on how to dominate side control. Keeping side control is one of the crucial things a white belt has to learn and Haueter’s strategies are all you need to do so.

Luis Heredia is one of the pioneers of BJJ and an Helio Gracie student. That tells you all you need to know about his pedigree. Heredia still favors the old school style of BJJ that Helio thaught and his DVD reflect that. it’s a very strong contender for the best DVD for white belts that there is!

Heredia’s focus is on counters and escapes that’ll help every white belt survive their initiation period. Also, he explains some of the truly fundamental BJJ concepts like weight distribution from the top and knee on belly attacks. Hos knowledge of the guard, especially how to pass it, is very apparent and he explains it in depth. Going for this  DVD is certain to do one thing – make you better at Jiu-Jitsu.

No quest for the best DVD fro white belts would be complete without a representative from the Gracie family. Gregor Gracie is an accomplished grappling competitor and Renzo Gracie black belt. His material is all about the very basics of BJJ. Guard passing, armbar details, choke mechanics and powerful sweeps are all in there. Not just that, but Gracie explains each and every one of them in a very detailed and precise manner. It’s one DVD set that you simply can not miss out on!