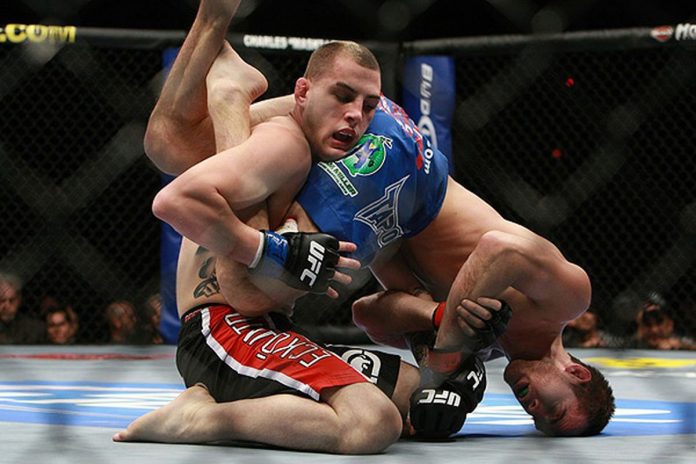 The BJJ triangle is one of the most offensive positions you can get into. And by offensive, I mean about much more than just the triangle choke. While the triangle choke and all its variations are highly efficient, there are plenty of other options from the BJJ triangle. It is, in fact, as much a position as it is a submission hold. If you see high-level grapplers attack with a triangle, you’ll notice how much they tend to transition in and out of other moves. The alternative finishes form the triangle position are actually more numerous than direct triangle options. And we have the 5 high percentage moves that’ll guarantee you get a tap from a triangle.

Why do we like the triangle choke so much? First, it is fairly easy to get into, regardless if you’re in a Gi or No-Gi situation. Secondly, despite many of nuances in its mechanics, it is a fairly simple choke. Actually, this is exactly how we learn it first, as early as a white belt. However, looking at it as a position of control and a launch pad for numerous attacks makes it even more versatile. The BJJ triangle also has the ability to work at every possible level of the sport. It is also highly efficient in MMA conditions, as well as a great option for self-defense, especially for women. Last but not least, defenses against the triangle choke are not plentiful and are not hard to counter. Especially when you have a bunch of submission options as follow-ups.

The Power Of The BJJ Triangle

Hunting for triangles has another aspect to it that is very attractive to lots of people. It is available from a host of different positions that include both top and bottom ones. The main reason the BJJ triangle is such a powerful choke is that it is done with the help of the legs. The legs are the strongest parts of our body, and, when used against one of the weakest spots, which is the neck, the advantage is unmistakable. 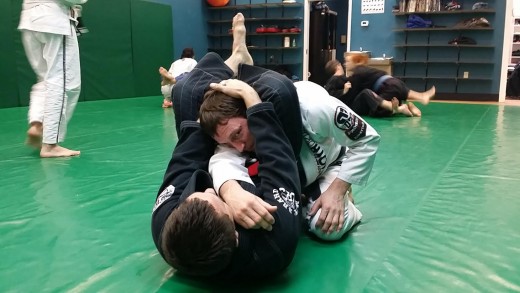 For a triangle, in most cases, you want to be on your back. One leg should go under the opponent’s armpit and behind their back. The other leg goes over the opposite side shoulder, and on their back. Locking your feet together here gets you in the “diamond” position, which precedes the triangle. From here, you can launch a whole host of attacks.

For the BJJ triangle, the goal is to get the leg that is on top of the shoulder to touch the shoulder on the other side with the heel of your foot. In order to achieve this, unless you’re extremely flexible, you’ll need to pivot toward the side that leg is on. From there, the goal is to get the other leg over the one that’s on top. This locks the triangle in place and gets you in the perfect attacking position. For a triangle, you need to switch the trapped arm to the other side and pull on the back of the head.

The hands-down best information you can find on the triangle choke is in the “Mastering The System: Triangles” John Danaher DVD. It is a 10 hour long, DVD set containing everything you need to know on every possible triangle variation. Plus it is all thaught by the best BJJ instructor in the world!

The power of the triangle is that you have your opponent’s posture broken at all times. The beauty of the position is that it offers submission options in pretty much each direction. Apart from the “basic” triangle and triangle choke variations you also have armlocks and different chokes. Some of the options include straight armlocks, armbar from the bottom, Omoplata, Kimura,  hand choke etc. There are more, but these are all but guaranteed to bring you a tap. There’s one more aspect to alternative BJJ Triangle attacks that makes them truly high level. That is the ability to switch between all the alternative attacks, as well as the triangle choke and its variation.

The diamond position is considered position zero for launching triangle attacks. However, it is also a position of great control in itself. This means you can use it to attack with different submissions instead of finishing a BJJ triangle choke. This comes particularly useful in cases where opponents realize the triangle danger and start defending early.

The focus of people trying to fend off a triangle is to prevent you from establishing the position. This means hiding the far side arm (the one necessary to finish a triangle choke) as far away from you as possible. Their next goal is to establish a wide base and try to regain posture. However, doing both at the same time is next o impossible. This means that if they lose posture, you can lock the triangle. Conversely, if they focus on posture, you can attack the arm they’re hiding. Since your leg is under the armpit already, you have a strong body part against a weak one. It is a battle you’ll always win.

All you need to do is push their head away from their arm, and turn towards the trapped arm with your head. This lands you bang in the middle of an Omoplata setup. From there, proceed to finish the Omoplata as usual.

Kimura From Opposite Side Triangle

The opposite side triangle Kimura is one of the best attacks you can get from the BJJ triangle position. For me, it is a personal favorite as it gets you an angle on the Kimura that makes it ultra-tight and impossible to defend. The whole thing with this position is that it’ll have you confused the first few times you give it a try.

With this Kimura, you’re looking to attack the arm that you usually include in a triangle choke once again. However, getting an angle to establish a figure four grip is impossible from both the diamond and the triangle position. However, if you switch the side where you lock your triangle, you open up a direct route to the arm. While you may lose the ability to get a triangle choke directly, you get a very powerful Kimura lock that nobody can get out of.

A straight arm lock is also a good option when you’re attacking the opposite side Kimura. However, you can also look for a straight armlock on the far side arm, the one that is free. The reason this works so well, despite the superior positioning, is that people are not expecting you to attack that arm. Moreover, most people don’t even know there are high-percentage attacks on that side also they might even let you have the arm.

When the opponent is hiding their trapped arm under your butt, you get a great chance to attack the far side arm. Whether you’re in a triangle or the diamond position, the goal is to get an udnerhook under the far side arm. Use a palm to palm grip to isolate the arm and extend it with the palm towards your shoulder. Once you have it there, tilt your head to the side so that you trap their wrist. All you need to do now is use your torso to extend the arm as much as possible and use the palm to palm grip to place direct downward pressure on their elbow.

This one is the craziest submission option that is available from the BJJ triangle. It is unorthodox, unexpected and arguably the most efficient one. It’ll take some time adjusting at first, but once you get the knack for it, you’ll be unstoppable.

The hand choke is also the easiest one to set up. Form the diamond position, the goal is to get both your arms under your own knees. Once you have them there, you need to establish a solid grip. A palm to palm or an S-grip work best here. You then pull your arms as close towards you as possible and curl your legs on the opponent’s back. To finish you pinch your elbows together first, and then extend your legs for a very powerful choke.

Getting an armbar from the triangle off your back is one of the first transitions people learn. Whether you go from armbar to triangle or vice versa, the connection between the two is unmistakable. However, you also have the option of hitting them both at the same time as well. This means you can attack an armbar with the triangle as a fail-safe option ready to go. Or any of the BJJ triangle attacks we cover today.

The option to attack the armbar usually opens up when an opponent really tries to posture up. If you’re up against a particularly strong opponent, or you do not have the posture broken correctly, an armbar is a great way of finishing the match right away. All you need to do is use the fact that their arm straightens as they regain posture.  Of course, we’re talking about the trapped arm once again. All you need to do is transfer the leg that is over the shoulder on the other side and you’re in a deep armbar that is really hard to get out. The best thing is, that if they decide to counter and defend it, you can switch back to any of the other BJJ triangle options.