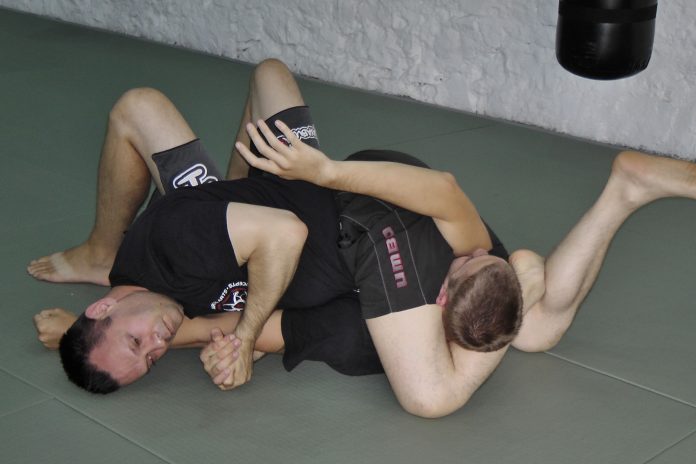 When we’re talking submissions in Brazilian Jiu-Jitsu we either think chokes or joint locks. If you take the modern leg locking craze aside, you’re left with good old arm locking options. In terms of armlocks, people tend to go for one of two choices. They either hit a straight arm submission or a bent arm variation. While the bent arm variations boast with plenty of variety, as far as straight arm submissions are involved, there’s only one – the armbar. However, the armbar has a next door neighbor that’s just as potent if not more. The straight armlock is old school submission straight out of hell, for those that know how to use it.

Ah, we’re on to explore the world of a true BJJ classic once again. The straight armlock is as old school as submissions get. It even features as far back as the very first “self-defense” instructional. In BJJ, the approach to the straight armlock is different – it works. There’s no apparent reason why people avoid this easy and effective submission hold nowadays. The straight armlock is available from a variety of positions, both from top and bottom. Furthermore, this move works just as good with the GI as it does in No-Gi. Let’s revisit this forgotten submission and see where it can feature in a modern grappling game plan.

As the trend of submissions changes over the years, some moves get left behind very often. IT happened to leg locks until a while ago. It happened to a host of sneaky moves that work like a charm if you’re aware of their existence. The straight armlock is not one that was completely forgotten, however, it is one that most people skip over when they roll. That’s a real shame since it presents itself during transitions between other submissions and positions of control. Why skip over a legitimate and easy to master submission hold, just because you’re not sued for hunting it?

The Secret Of The Straight Armlock

The straight armlock works much like the armbar. The ultimate aim is to place pressure behind the opponent’s elbow, on the side of the upper arm. The direction of the pressure needs to be opposite of the direction in which the elbow bends naturally. The main difference to that of the armbar is that you’re not using your hips to put pressure on the elbow. At least not directly.

The straight armlock is done with your body in, essentially, an opposite position than that of an armbar. The main source of pressure for the arm lock are the hands of both your arms. The grip to go for is the palm to palm grip, right above the ulnar process of the elbow. There’s a small little pocket there in which a palm to palm grip fits perfectly. Finishing the armlock requires leverage on the other side of the lever as well. This means you need to have something propped against the wrist of the opponent, pushing in the opposite direction of the pressure on the elbow. The best body part to use for this is your shoulder.

Finally, in order to make sure you truly have the armlock, you’ll need to trap their wrist in place. There’s no way to keep their arm on your shoulder just by placing it there. However, if you use your head, bending it towards the arm, there’ll be absolutely no way out. Keep in mind that this is the most usual way of setting up the straight armlock. There are ways to set it up that do not involve your shoulder or a palm to palm grip. But, more on that later.

Straight Armlocks From The Top

The best position to hit a straight armlock from, when on top, is North-South. Whenever you find yourself there, you do not have any direct submission opportunities. North-South is great for holding an opponent down but not submitting. Unless you have the straight armlock in your arsenal. Form a strong north-south position, an opponent is going to attempt to place one arm under your neck in order to create space. if they don’t you can always place it there yourself. Once the arm is there, you can think about finishing. Switch your base in order to open up space, use the arm that’s closer to their hips to secure the elbow and then establish a palm to palm grip. All you need to do now is place forward pressure with your body while pulling with the arms. Keep your elbows close and there’ll be no way out.

Another top position for getting a straight armlock is the mount. Simply put, whenever an opponent resists your Americana attacks he opens up an armlock straight away. Whenever an opponent extends the arm defending a bent arm lock, look first and foremost to trap the arm. Use the head and shoulder trap we discussed earlier. Once you have it, keep the arm extended long enough to set up your palm to palm grip. Since you’re on the top, you have gravity working for you. Base on your head and feet, keep your hips heavy and pull your arms toward you. IF you’re having trouble finishing like this, you can always throw a leg over their head and create further tension.

The straight armlock from the half guard was a favorite of mine for a long time. Now that people now I’m hunting for it, I use it mainly to set up other attacks. Every now and again, though, when I go for it really fast it works like a charm. This one is probably the easiest to set up, as the opponent usually gifts you the submission. Every time you’re in bottom half guard the opponent is most likely going to look to place an arm under your head for a crossface. Once the arm is there, use your arms to set up the palm to palm grip/ Once you have it, use your free leg to swing it over their head. Now trap the arm with your head and extend your hips while pulling down for the tap.

The straight armlock from the closed guard is set up a bit differently than other armlocks. From a closed guard, the aim is to get a tight overhook on one of the opponent’s arms. The higher you are on the arm, the better. The hand of the overhook should grab the opponent’s lapel on the same side. Once you have it, open the guard and hip escape toward the arm. Place your feet on both sides of the hips of the opponent and lie on your shoulder. Now you have the angle to finish the armlock with ease.

Check out what Chris Haueter has to say on the subject of straight armlocks. Even better, check out his complete “Old School Efficient BJJ: DVD instructional for a whole bunch of easy, effective and brutal movers most people have forgotten about!