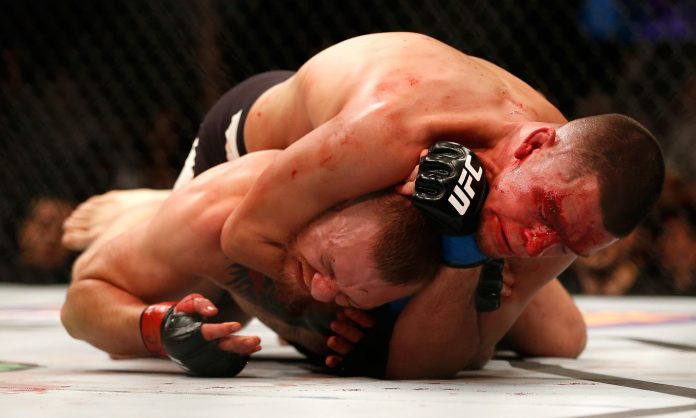 Jiu-Jitsu moves that you will use in MMA fights may make you an absolute winner or absolute loser. Using “wrong” Jiu-Jitsu moves in MMA can really cost you a lot. So, you’re an MMA fighter and you’re ready for the spotlights on the big stage. But how much confidence do you have in the different aspects of your game? BJJ, wrestling, Muay Thai, boxing, judo…they all have their part to play when the cage door closes.

Let’s say, for argument’s sake, that your stand up game is spot on and that you’re fairly comfortable in clinch situations against the wall. You’re controlling the center, applying your own rhythm and feeling loose. Everything is going as planned, but then, the fight goes to the ground and you find yourself in a whole new dimension. Are you confident enough that your BJJ game can get you through the ground exchange in an MMA match? Do you know what are the most effective Jiu-Jitsu moves for MMA?

The role of Jiu-Jitsu Moves in MMA

Brazilian Jiu-Jitsu is the staple of the modern MMA game, but it is an art in itself that requires a large amount of time in order to be proficient at. In retrospect, getting a black belt in BJJ takes longer than acquiring a high level of knowledge in the other arts MMA consists of.

Let’s use the example of Olympic weightlifting to paint a clearer picture. The Olympic lifts (clean, jerk, snatch etc.) are an incredible tool to develop explosive power and strength. However, they have a larger learning curve than most other forms of plyometric and strength training because Olympic weightlifting is a sport on its own. It takes years for Olympic lifters to become experts in moving such massive weight correctly.

It’s the same with Brazilian Jiu-Jitsu Moves in MMA. Sure, you might decide that you’re gonna guillotine everyone and focus solely on perfecting the guillotine for use in MMA but it’s not going to get you far. Without a strong base in BJJ, you can’t use the art to truly add to your MMA arsenal. But developing the base alone will take years. So now, there’s a decision you have to make. Are you willing to put in the time and gain the much-needed experience for a well-rounded MMA game or are you going to go for the quick fix?

The BJJ quote about Penguin and Eagle

As master Carlos Gracie Jr. black belt, once said on the subject: “Although the penguin has the ability to walk, fly and swim when needed, he’s not very good at any particular one of those qualities. The eagle, on the other hand, has just one quality – to fly, but he does so to perfection“.

Using the examples of Demian Maia or Jacare, it’s clear that with an excellent BJJ background you’re on the right path for MMA stardom. 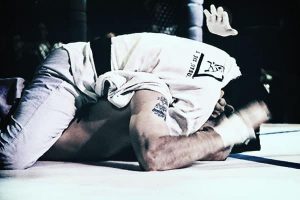 The highest percentage of Jiu-Jitsu moves for MMA

Most noteworthy, not all aspects of the BJJ game have the same level of application in MMA. Even with highly restricted striking options, like the example of Combat Jiu-Jitsu, strikes can significantly impact what you can safely do on the ground. In the MMA context, the very basics of BJJ should be the main focus – as much control as possible, from a position of safety, that’ll ultimately lead to a submission.

Let’s take a look at some of the options that are most likely to guarantee you victory when the fight hits the mats.

The infamous “Mata leão” or “lion killer” was the original choke that brought BJJ to glory and kicked off the emergence of MMA. It’s a highly reliable technique, not just because it leaves no doubt about the winner (tap or nap) but because you’re doing it from one of the best positions with complete control in BJJ – the back position.

With strong seat belt control and properly aligned hooks, both the shoulder girdle and the hips of the opponent are immobilized. After winning the grip fight, the choke is there, resulting in pressure on the carotid arteries which restricts blood flow to the brain, causing a deprivation of oxygen which leads to loss of consciousness.

The Guillotine choke is accessible from different levels in an MMA fight, both standing and on the ground. You can perform Guillotine from the front side of an opponent, by placing them in the front headlock position. From there, you place the choking arm across the neck, connecting it to the other arm via a variety of grips. The non-choking arm is used to tighten the choke and can be connected to the choking one with the opponent’s arm included (arm in guillotine).

The Guillotine choke places pressure on the trachea, resulting in disruption of the air flow and subsequent loss of consciousness.

Offense from the back is a trademark of the art of Brazilian Jiu-Jitsu and the triangle is a great statement on that. Offering tons of varieties, the triangle choke is a powerful weapon when utilized correctly. In the context of MMA, safety in the guard position is the first order of business. Only when strikes are neutralized to some extent, you can think about wrapping a triangle on your opponent.

The mechanics of the choke are in the triangle that you create around the opponent’s neck by your legs on two sides and his shoulder on the third. By using your legs against their neck you ensure that your strongest body part is attacking their weakest. Angles play a major role in finishing the triangle choke and that is a good base of Jiu-Jitsu proves it’s worth. A rushed submission is a bad one in any situation, but when the guy/girl on top can rain punches and elbows on your face it is a whole different story.

One of the most well-known locks in grappling martial arts, the armbar is as effective a submission as it is simple. You can set it up from virtually every position in BJJ and have a very high finish rate.

Mechanically speaking, the armbar creates tension in the elbow joint, applying force in the direction opposite of the joint’s natural bend direction. Prior isolation of the shoulder joint and control of the wrist is mandatory in order to obtain efficient control before applying the lock. As with the triangle, a very strong body part (the hips) is applied against a week body part (the elbow joint) causing a break in the arm.

Of all the positions the armbar is available from a lot of situations you find your self in a fight (closed guard, side control, back control…). Strikes can be used to “soften up” your opponent before ultimately transitioning into a strong position for finishing the lock.

Focus on what really matters and avoid being a few tricks pony if you’re willing to lay your health on the line in the cage. Give yourself your best shot at staying safe and finishing quick, while dominating the opposition by utilizing the principles and techniques of Brazilian Jiu-Jitsu.