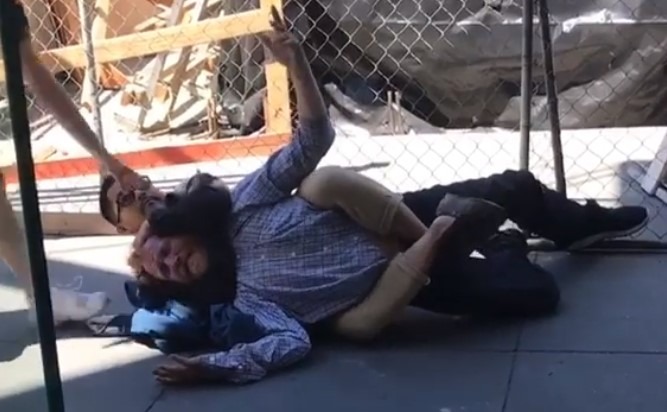 Lamorinda BJJ instructor Mozart Gutierrez was attacked today on the streets of San Francisco and he displayed a fine self-defense execution without the use of excessive force. Something that should everyone do in a street fight if it’s possible.

Mozart Gutierrez was able to control his attacker forcing him to give up on the attack without any consequences. This is exactly what Brazilian Jiu-Jitsu teaches you and you’re able to execute it without any problems on almost anyone and especially on someone without any training.

If you check the video of this self-defense you’ll be able to see some pretty weird comments about this fight where the BJJ coach didn’t want to inflict any pain on a guy who attacked him. Here are some of the comments:

“Pretty sure the homeless guy was harassing him and swing first. Definition of self-defense”
“are you beating up civilians on your commute to work?”
“I think you lose empathy from the public to get help when you take the guy to near unconsciousness. An extreme length of self-defense turns into what looks like retaliation of pain to bystanders passing by. Not everyone walking down the street is a jiu-jitsu enthusiast and can appreciate looking at someone in distress like that. Regardless of who the “victim” or “attacker” is. I don’t blame ppl in the vid for reacting how they did.”
“Far from self-defense. This was just an attempt by Mozart to be his cocky self and beat up on a mentally ill homeless guy. Go use your BJJ on someone who will put up an actual fight. Let’s see your “self-defense” there.”
“Little Asian man thinks he’s big! wow!”

And there are other comments supporting BJJ Instructor in this street fight:

“I’m shocked he stopped I thought he would stop when that dude was choking on his tongue on the floor I mean he can go home on a stretcher At least your walking and alive today, see how many crazy homeless people are in San Francisco? Do you know how many shooting stabbings and muggings they commit? LA has a HUGE problem with homeless men and woman carrying guns on their person with no CCW or approval cause THEIR HOMELESS! Straight up if a homeless man attacks me or my family he’d be lucky if he wakes up in a fucking hospital, causes like I said when some junky attacks you for no reason and a lot of them got guns, you don’t walk away, and you don’t fucking talk. you choke them the fuck out and disarm their ass till the cops get there to arrest both of you and you can explain to them (a sane person) that a homeless man attacked you or your family and your defending your life.”
“So what are you supposed to do in San Fran let people accost you? People should ask and assist if needed. That hippie stuff doesn’t work when someone is trying to hurt people.”
“Unbelievable. A smart and capable man defends himself and the public shame him and makes him look like the villain. Smh”
I’ve certainly been attached before and in return received no help from bystanders looking on. Let’s use common sense here. ?. Two people saying they were attacked. A man in a defensive position holding another man and when getting up afraid of being attacked again. If the Asian man was the aggressor, he would’ve thrown punches. I sense a bias in you……”
“Pretty sure the homeless guy was harassing him and swung first. Definition of self-defense”
“Nobody willing to call the police or help out is just sad. Is everyone quick to want to help the attacker tho? Only in San Francisco!”
“Cameraman should’ve gotten choked out, “let him go before I kick your ass” yeah right!”

If you check the video the BJJ Brown Belt instructor Mozart Gutierrez was obviously saying that he was attacked and was telling people around to call the cops.

The weirdest thing in this situation is that some people around want to help the attacker and no one is saying they’re calling the police. We can say that people are saying he’s homeless, what we don’t know, and it really doesn’t matter in a situation where he’s attacking people.

So, when you’re attacked, you won’t let the guy walk away just like that simply because you’re not sure he won’t attack you again. What if he let him go and a guy pulls out a knife or any other kind of weapon? Would that be a risk to your life and the people around you?

To sum it up, the BJJ instructor didn’t do any damage to the guy in this street fight. He didn’t kick him, didn’t punch him, he didn’t make him bleed or have any consequences. He just made sure the guy is calm and won’t attack him again. Wasn’t that the best thing he could actually do?

If you ask me, the only wrong thing Mozart Guiterrez did here that he crossed his ankles but luckily for him the other guy doesn’t know how to ankle lock him 🙂

Check out the video and tell us what you think:

BJJ In A Street Fight & The Most Effective Moves