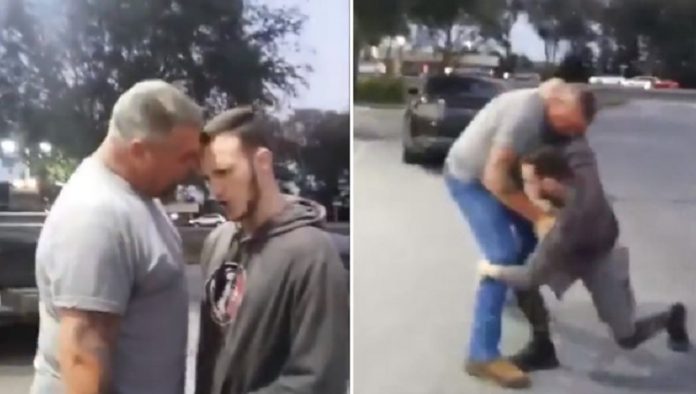 Takedowns in BJJ are something that most schools don’t practice at all. The main reason for that may be the BJJ rule set which allows you to pull guard without penalty. But takedowns are definitely something that you should train in your BJJ class.

In this video, we can see probably a Jiu-Jitsu practitioner trying to take down his opponent in some weird ways. It’s obvious he had no takedown skills at all and we can say he was lucky that a big guy had no intentions to hurt him. Well, just don’t be this guy. You will look silly.

Watching this fight we can see that the smaller guy lacks Distance management, situational awareness, hand positioning, verbal de-escalation, common sense, etc. He’s missing all Gracie Jiu-Jitsu Basics for these situations.
And from the perspective of a BJJ practitioner, we’ll cover only three major mistakes that the smaller guy did and they will include a self-defense aspect of BJJ.

The first mistake was that the smaller guy got into a fight at all. As a BJJ practitioner, the first lesson you should learn is to avoid fights and don’t fight if you don’t have to. This situation was easily avoidable, although, we don’t know what caused the fight, we can see that big man had no intentions to fight at all. Even when he was able to punch the smaller guy he was just pushing him away.

Second mistake – No Distance management. The smaller guy didn’t manage the distance at all. He could easily get punched once he started threatening as threatening is usually a trigger for someone to make the first move. And he could easily be in a knockout in this situation.

Third Mistake – Hand positioning. Once you find yourself in a situation like this the last thing you want is to have your arms in your pockets or holding a phone in your hands, etc. Your arms should be in front of your head to be ready to defend yourself. And, also, your hands should keep the attacker at a safe distance so you have time to react on a first punch or kick or any kind of attack.

If you want to see how this should really work in a street fight check it HERE as this is a very good example when a small guy takes on a much bigger opponent.

You can also check in a video below how it should really look in a street fight. You can see a small guy taking down a big bully.

Or you can check how effective a good takedown can be in a real situation. Judo guy was attacked by some hooligan but he managed to resolve the situation as fast as possible.

Judo Guy Slapped by Hooligan in the Super Market. Watch His Reaction & The SLAM!

Or check this video where the difference between both guys is huge but the small guy still manages to double leg this big bully.