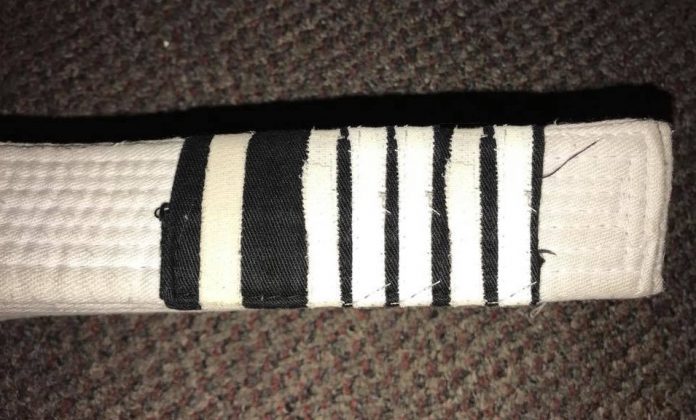 We all know that guy. For whatever reason he never sticks around for live rolling. Or he always got some injury that persuades him to go live after class. It’s not enough for your coach to see that you come to class on a consistent basis. Your coach wants to see that you clearly understand the concepts he has taught and that you can demonstrate them effectively in a live situation. The first milestone of Jiu-Jitsu blue belt requirements requires one thing above any other, the demonstration. If you haven’t demonstrated your ability to execute the techniques in the sparring effectively in front of your coach, don’t expect your belt to change colors anytime soon. Because that’s exactly what a “belt test” consists of. It’s demonstrating techniques you’ve learned in the class.

Now, on the opposite side of that coin, some people tend to show up to class late for whatever reasons and only make it in time to roll. Sure, these people might have a nice armbar or some other submission, but that’s 1% of jiu-jitsu. Constantly being late to class and only showing up for rolling is like missing all week of school and only showing up for the test. Sure, there might be some freaks of nature who can do all this and succeed anyway, but if you’re an average Joe you’re going to fail. The only way you are going to be able to earn your professor’s trust and convince him of your knowledge is if you give him the opportunity to pass his knowledge to you! That means showing up to class on time and letting him teach you his or the schools curriculum. Even if it’s a technique you already know you should pay attention! Maybe you missed some detail or a concept that could make your technique better and more efficient. Maybe your professor discovered a detail that will improve the technique.

Jiu-jitsu is more than a martial art, it’s a sport. It’s a sport with no off-season. BJJ tournament is running all year and a lot of coaches take pride in seeing their students at all belt levels test their skills against other academies. Either you win or lose your coach wants to see you support your academy by testing your skills in a BJJ tournament. Wearing the patch and not competing is like having a sword and shield and not following your brothers and into battle. You want to show the ability to subdue an unknown opponent after rolling with the guys from your academy and represent them. Your coach wants to see you wear the patch into battle and be an ambassador of your school while demonstrating your understanding of Jiu-Jitsu.

4. You Don’t Support Your Academy

Jiu-jitsu academies, in my opinion, are unlike any martial arts associations in the entire world, in the sense that they are truly a family. Jiu-jitsu academies often have a clear lineage and close associations to other academies across the country and across the world who are under the same banner. Your coach wants to see you support the association. This means that when Mr. Gracie, Mr. Ribeiro, Mr. Medeiros, i.e. the head of your association comes to give a seminar at your school- you be there. If that means skipping a night of drinking to save money for the seminar than do it. If that means staying home Friday night so you can wake up early Saturday and go to the seminar, then do it. Also, a lot of associated academies like to do cross-training in order to prepare for tournaments and get students rolling with people with different tools and weapons. It’s important that you show up to things like this to support your academy and your coach, and most importantly your association.

5. You Care Too Much About the Color of Your Belt

“Whats on the blue belt test?”, “Is this going to be on the blue belt test?”, “When will I be good enough for my blue belt?” Its okay to ask these questions a few times, and I’m sure your coach does want you to know. But once it becomes clear to your instructor that your main intention is getting promoted that will raise a red flag. Some wise man once said, “The belt will change colors on its own”. It’s quite ironic how the more you care about the belt, the slower it seems to come. Slow down, enjoy the experience. The white belt is like the freshmen year of high school. It sucks, but one day you will miss it because it only comes once, and for most people the, a black belt is the LAST belt you’re ever gonna have and not to mention the toughest competition you’re ever gonna face, so why be in such a hurry? Take you’re time and enjoy the journey and you won’t regret it.

6. You Use too Much Strength instead of Technique

The whole concept behind Brazilian Jiu-Jitsu is that larger stronger and opponents have no advantage over smaller weaker ones. So if you’re constantly doing well in your academy by using brute strength and muscle to overcome your training partners, this is a clear sign you are not ready to start receiving a rank. Jiu-Jitsu is not about strength in any sense of the word. Strength will come into play at some point in time but that bench pressing and arm wrestling will NOT be part of your blue belt exam or any other belt exam in your BJJ career. Slow down, catch your breath, wipe the sweat off your head and focus on technique rather than strength. Play your guard against bigger opponents. Force yourself to work outside of your comfort zone. Use leverage and technique and you will start to see an improvement in your submission game and your belt color.

7. You Can’t Stay in one Academy

“Well, I would be a blue belt by now if I would have stayed at XYZ academy.” We all know that guy who cannot seem to stay at one academy for some time. A strong piece of advice for any white belts walking into a new academy, the professor does not care who you trained with before or how long you trained with them. A lot of black belts pride themselves on having homegrown champions and homegrown curriculum for each belt level. It doesn’t matter if you were black belt level from XYZ guy because you’re still gonna have to reach blue belt level for your instructor. You don’t study plumbing for an electronics exam, so don’t expect to get your blue from Carlson with the jiu-jitsu you learned from Rickson. Your coach doesn’t want to just know your Jiu-jitsu, they want to know YOU. Try to stay at ONE academy if you can. If you can’t seem to find what you’re looking for at 2 or 3 or more academies than maybe the problem isn’t the instructors. Maybe BJJ just isn’t your thing and there’s nothing wrong with that. It’s Simple, If you don’t stick around at one academy for at LEAST a year don’t plan on getting your blue belt.

If your coach has shown you 500 techniques and you can still only execute one when rolling then maybe you’re not ready for your Blue Belt. Show your coach that you’re paying attention to what he’s teaching and that you understand. And if you don’t understand, ask questions. If your instructor showed spider guard that day, play spider guard after class.  It’s not only important for your improvement but your instructor really wants you to absorb the information for your own personal gain. In Brazilian jiu-jitsu knowledge is power, and knowledge of a blue belt has to be better than white. Not just by one or two techniques but the full array of techniques.

9. You Don’t Correct Your Obvious Mistakes

The first time your coach tells you to fix some technique it’s OK. The second time, that’s OK too. But, the third and fourth time is still OK but you should fix it till then. But the 9th, 10th, and 11th, no matter how supportive your instructor sounds, he wants to take the black belt off his waist and hang you with it. Listen to your coach even if sometimes what your coach tells you to do may be uncomfortable and unnatural. Maybe you feel like if you did what he says you will expose yourself to a submission or a bad position, but listen to him as he’s right in 99.999% of situations. If your Instructor keeps telling you to do something that feels unnatural it’s because you’ve created a bad habit and he desperately wants you to abandon it. Going from white to a blue belt isn’t just about learning new techniques but breaking bad habits. Stop giving up your back. Stop resting in bad positions. Stop holding onto the guillotine that is not working in that position. You might think that your coach doesn’t mistakes you continue to make, but it’s more likely that he sees everything. And if you don’t listen to your instructor you might end up being a 10-year white belt. And you won’t be the first one, there’s a lot of them.

Brazilian Jiu-Jitsu is Brazilian Jiu-Jitsu and it should not be confused with MMA, no-gi grappling, Sambo, Judo, Catch Wrestling or any other grappling sport. You have to learn the chokes, locks, guards, positions and everything in BJJ in a GI. So, no amount of training in other NO GI grappling sports will make you a Blue Belt in Brazilian Jiu-Jitsu. You can progress faster, you can be better in rolling than many new students but for BJJ you’re a white belt. So, stop thinking about how you can strangle some blue belt or even purple belt because BJJ is more than just a roll. You have to show that you know all the techniques required for the blue belt and you have to make sure you know how to do BJJ specific chokes and other submissions in the GI.

YOU ARE NOT INSTRUCTOR. Brazilian jiu-jitsu instructors dedicate large amounts of hours of their lives, to learn BJJ. They don’t just wake up in the morning and decide to be an instructor. Although there are many fakes around it takes hours and hours of vigorous training and learning. So don’t ever think for a second that anyone knows if you’re ready for a promotion more than your Instructor do. Put in the mat time, put in the class time, try to compete, support your instructor and your association, learn from your mistakes, show up to the class consistently, maintain the attitude of a student and continue to learn. The belt will change colors on its own!