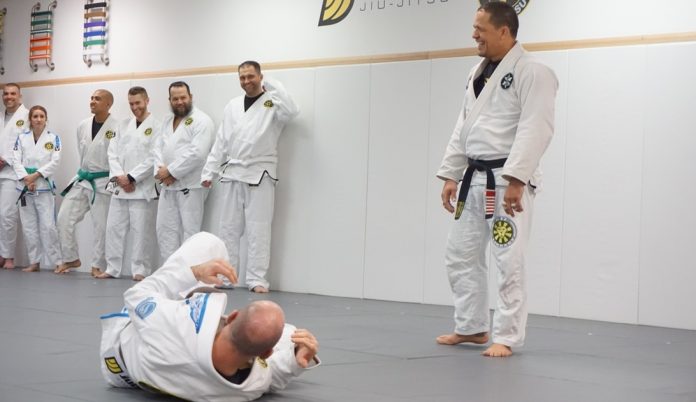 A white belt is a very difficult period for a BJJ student. For those that survive the initiation, in the form of torture from higher belts, it gets way more complicated before it gets easier. After the first couple of ego-crushing months, it is time for a new student to actually start learning. However, new white belts are like a boat lost at sea – they need directions to survive. This is the period when they get introduced to the BJJ fundamentals that they’ll need to advance in the art. The fundamentals of BJJ are the building block for a strong game. Instructors need to make sure that new students aren’t just rushed through fundamentals classes.

A common mistake often seen nowadays is white belts going for spinning, flying or potentially dangerous attacks. YouTube doesn’t help either, offering access to the attractive before the fundamental. The role of instructors is paramount at white belt level. They should guide new students carefully towards the BJJ fundamentals. Only by mastering fundamentals can students grow sufficiently enough to embrace the fancier side of BJJ.

BJJ Fundamentals For Every White Belt

Although it might seem to the higher belts that white belts have it easy, it is not so. Try to remember your days as an eager, confused white belt. First of all, the sheer number of names regarding positions and techniques is overwhelming. Remember when you couldn’t, for the life of it, make a difference between a Kimura and an Americana?

In terms of class structure, BJJ fundamentals are usually geared towards creating movement patterns. A student has to become comfortable in the movement planes associated with the art. Heavy emphasis on details should be avoided during fundamentals classes. It is difficult enough for white belts to try and grasp how to open the guard, let alone focus on subtle angle changes and weight shifting.

The basic concepts of structure, posture, and base have to be drilled into the minds of every BJJ white belt. Speaking of drills, they represent a great way to get repetitions out of new students. Basics first, simple demonstration of the technique, and then lots and lots of drills. That is a foolproof recipe for mastering the fundamentals of BJJ.

This point cannot be overstated. Students will not have any success in BJJ unless they master the basic movements. Bridging has to become inch-perfect in order to allow at least hope of escaping a bad position. Shrimping should be effortless on both sides. Getting back to standing or finishing a sweep via a technical stand-up must be lightning quick. The ability to string these basic patterns together is a clear mark of advancement in a white belt.

In order to be able to truly embrace BJJ, one must aim to become as proficient on the feet as they are on the ground. Both break-falls and essential takedown elements (like the penetration step) are fundamental components of beginner drills.

Whereas the term grip fighting might seem indicative of Gi-only training, this is not the case. Grip fighting is equally, if not more, important in No-Gi. Only the principles of gripping are different. Actually, principles of grip fighting are exactly the point of focus in terms of BJJ fundamentals. Again, both standing up and on the ground, students have to know how and where to grip, as well as how to break grips.

This skill might seem even too fundamental to higher belts. Nevertheless, the outcomes of lack of grip fighting fundamentals are present at every tournament. Even blue belts often struggle with basic concepts of grip fighting in competitions. White belts that focus on mastering this skill early are a handful for every level of opponent. 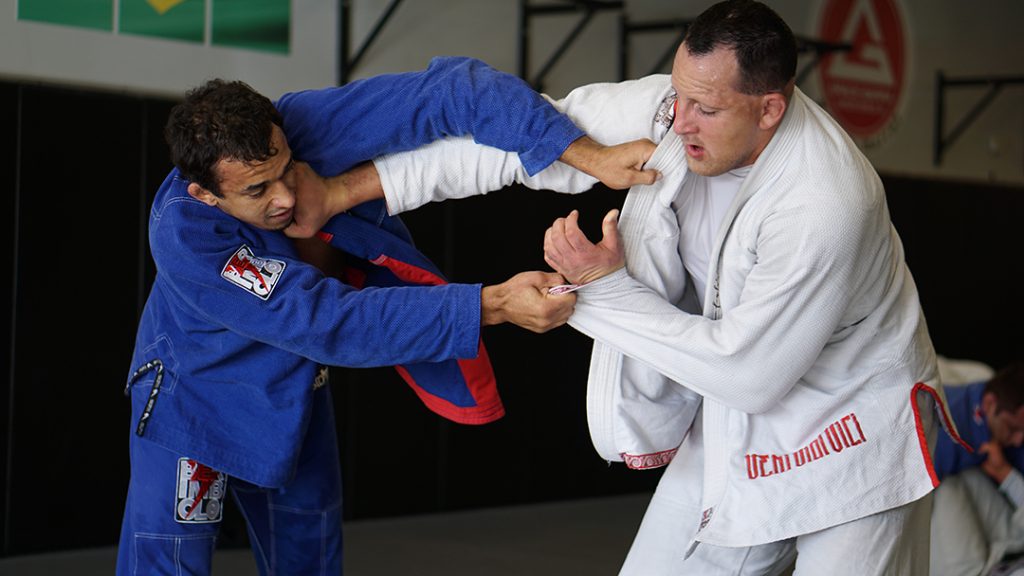 As crucial as relaxing is in BJJ, it is rare for a white belt to be able to avoid tensing up. It is normal and expectations have to be managed. That, however, does not mean that one shouldn’t aim to learn how to be comfortable in discomfort. In fact, relaxing is one of those elusive fundamentals of BJJ that lots of people seem to miss in the beginning.

It is completely understandable how being smashed under a person that’s trying to choke you at the same time might cause someone to freak out. Nonetheless, time on the mats results in experience during such ordeal, which, in turn, leads to less panic. Now, imagine that you consciously focused on this aspect from the start. It would’ve been so much easier further on, wouldn’t it?

As easy as it sounds, the one crucial step towards more relaxed rolls is breathing. No need for complex Wim Hoff-like methods. Just focus on expelling CO2 and getting your fill of oxygen. Proper breathing is the easiest way to countering panic attacks in uncomfortable positions.

Now that we covered breathing, we can think about escaping those dreaded bottom positions. First of all, no one expects from a white belt to be able to escape a black belt’s back control. It just won’t happen, because it takes lots of experience and technical knowledge. Similar holds true for the half guard.

On the other hand, positions like side control and mount shouldn’t scare white belts. Yes, there will be plenty of failed attempts. But giving up and allowing a submission without an effort to escape is not the answer. The focus should be on the technical way is out. Bridge, shrimp, bump and find your way out! You’ll soon discover that it becomes easier with practice. And it feels better than tapping out, too.

If there’s a staple of BJJ fundamentals that it must be the closed guard. Yes, Keenan’s latest animal guard is fascinating, but what can you do from the closed guard? Fundamentals classes are usually very closed guard-heavy, as they should be. The closed guard is a high controlling position that allows the bottom person to efficiently attack. It doesn’t require too much energy and is hard to bypass. These are all great characteristics for fundamental positions.

Remember that pesky grip fighting we discussed earlier? This is one very important application of that. Mastery of basic grips allows a guard player to utilize an attacking game. Generally speaking, attacks at the white belt level should go in two main directions. One is looking for a submission adequate for a beginner. Leave the Gogoplatas for later and go for straight Armbars and collar chokes. They’re much more important and effective, especially for beginners.

The second attacking direction is sweeping your opponent to obtain the top position. Again, leave the inverted stuff alone and master scissor, pendulum and sit-up sweeps. They are the holy trinity of fundamental sweeps that every white belt has to know. 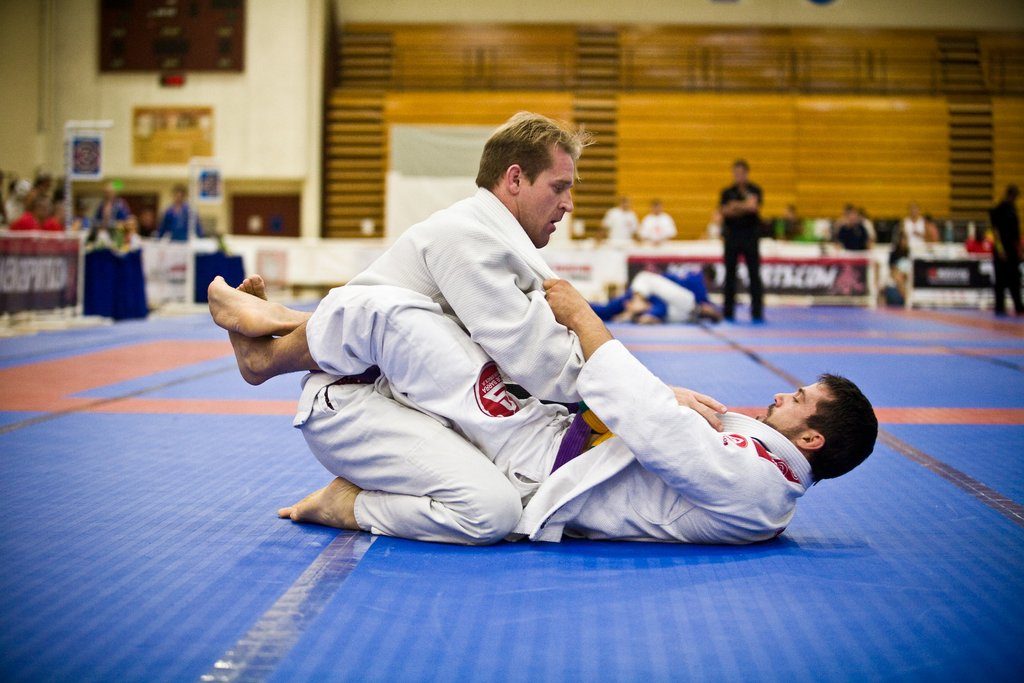 Lastly, a white belt has to know how to get around the basic closed guard. As many times as you get swept from reverse-De-La-spider guard, accept it and move on. The time will come to address it, but not without sound fundamentals.

Passing the closed guard is the base upon which a more complex passing game can be built. Whether it is pressure passing or acrobatic passing, a strong base and movement are a must. Both of these are fundamental skills taught at white belt.

Again, things should be kept simple. Passing the closed guard should be done kneeling or standing. Numerous repetitions of both are going to work out many kinks and pave the way for more complex passing concepts. In fundamental terms, become unstoppable in preferably both of these aspects and more technical guards are not going to present you with too many challenges.