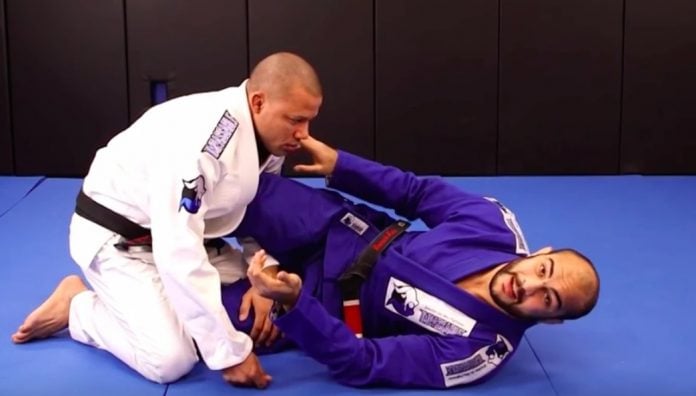 What is the easiest guard to sweep someone from in BJJ? Well, if you don’t know any sweeps, all guards will be difficult, however, if you ask me, half guard, is one of the top spots to use to end up on top. Why? Well, you already have one lag trapped so that’s almost half the job done right there. However, who do you know which of all the BJJ half guard sweeps is the best bet for you? Well, how about one that is so easy it will make your opponents blush!

BJJ half guard sweeps are interesting and fun, but they do tend to overwhelm. How wouldn’t they, when there are so many half guard variations, and different sweeps from all of them? still, if you’re ever stuck with what to do in BJJ remember that simple is best, and the more fundamental you go, the better. So, using Occam’s razor principle, if the simplest solution is usually the best, a sweep from half guard that’s so dumb it will make people embarrassed should be your number one option.

You Only Need A Couple Of BJJ Half Guard Sweeps

If you try to learn all the BJJ half guard sweeps in existence, you’ll have to spend a lifetime chasing a moving target. Instead, you only need a couple of sweeps that will help you get on top of anyone. There are only two things to consider here.

That brings me to the second thing you need to consider: Some half guard sweeps work from every half guard. Those are exactly the sweeps you want in your arsenal. As long as you know how to set up the grips that will open up the sweeps, the half guard variation you’re playing makes no difference.

Finally, there’s a bonus moment to consider – when you attack with a sweep. Simply put, you could be proactive and try and force the opponent into a sweep, or reactive, and use their passing attempt to set up a sweep trap.

Let’s look at one sweep that is utterly embarrassing for whoever is caught with it. From a basic knee shield half guard (aka Z guard), you want to follow some general half guard guidelines – be on your side, frame against the far side arm, and have your knees close to your chest.

The sweep works like a trap, meaning you’ll bait your opponent in thinking they’re passing your guard.  The bait is you trying to push his arm toward his legs, which is something that will almost always get a reaction out of the top person. That reaction often comes in the form of them trying to stop over your arm to break the grip. That, however, gives you exactly what you want.

The moment an opponent steps forward, they have all their weight on that leg, but at the same time, you still have their arm. that means they have no base, and all it takes is to push with the knee shield knee to get the easiest of all imaginable BJJ half guard sweeps. The sweep is based on deception and timing, but it does work like a charm. The best part about this sweep si that here’s no stopping it, and the grip you and on the arm gets you in a really good top position as well.

The reason why the simple BJJ half guard sweeps work better than their complicated counterparts is that nobody is expecting them. Doing something so utterly simply as toppling them over because you took away their base without notice seems like the ultimate Jedi mind trick to pull off on someone.

In the case of the embarrassing Z-guard sweep, there’s further fun to have at the expense of your opponents. Holding that far arm at wrist level actually opens up lots of opportunities for you,. If you can’t bait your opponent into breaking your grip, they’ll most likely attempt to posture up in order to change how they pass the guard. Then, you simply followed them up and pass the arm behind their back so that you now grip it with your other arm. Needles to say, the easiest al butterfly-based BJJ half guard sweeps is right here for the taking, with no way of defining it.

But here’s the ultimate kicker – if people manage to present one of these two seeps from taking place, you can always switch to the other one. Moreover, you could et up the same form butterfly half guard, Z-guard, the lockdown, and just about any other half guard you can think of. As is said, a couple of sweeps and a Jedi mind tricks all you need to sweep anyone from the half guard.

BJJ half guard sweeps are a great way of dealing with more experienced or bigger opponents. or both. They will manage to provide you with a top position, but only if you don’t overcomplicate things. leave the Tornado guard sweeps and crazy overhead stuff aside for while. Simply toppling someone over or sweeping them with their hand tied behind their back might not look as cool, but that’s the more reason people will be embarrassed by them. The best part is, there’s literally nothing they can do about it!