What would happen if a strongman entered a BJJ gym? We all know they’re big guys that are just as strong as they look, sometimes even more. However, would that help them against a trained grappler? The answer is of course, different and dependent on plenty of other variables. Check out a video of a black belt in BJJ rolling with a strongman in a friendly atmosphere to discover an answer to this question.

Rolling with big guys is something I quite enjoy, but then again, I am used to it. I was the smallest person in my gym and had to do it from day one, so now, a decade later, I have no problem dealing with beige and strong opponents. I have never, though, grappled with a strongman, one of those huge competitive strongmen that lift boulders and move trucks kind of guy. until I get the chance to do so, though, I can discuss another black belt in BJJ rolling with strongman, and hoping one day I can do the same.

The Small Vs. Big Debate: Who Wins

Brazilian Jiu-Jitsu was originally designed to help a smaller and weaker person beat a bigger, stronger one. But, then again, all martial arts have a claim like this. In essence, Jiu-Jitsu proved it worked in such a fashion mostly through Helio Gracie.

Helio was a skinny and sickly guy anyway, and he would come off as the smaller one in most matches. He did hold his own though, especially against some really big Japanese Judo specimens of the time. This demonstrated that being small and having a skillset like BJJ can help you not just dispose of bigger opponents, but also ones highly trained in other martial arts.

The debate of small vs. big people in martial arts has always been there. However, that debate can only be solved if we settle a very big aspect of the whole thing. Is the bigger guy trained, and if so, is it in the same combat sport as the smaller guy? Because, if it is grappling, the size will make it difficult for a smaller guy, but certainly not impossible, or in certain cases, not even hard, to win. For example, a black belt in BJJ rolling with a strongman who doesn’t train would have a much different match outcome than enrolling with a strongman that also knows Jiu-Jitsu.

A Black Belt In BJJ Rolling With Strongman

In the video below you can see a black belt in BJJ rolling with a strongman by the name of Martin Licis. He is a Latvian strongman and holder of the “Strongest Man In The World” title which he won in 2019. He gets into a friendly roll with a black belt named Ram Vision.

The idea is that a black belt is going to try and teach a couple of strongmen Jiu-Jitsu, and then roll with the big guys. Of course, it is the rolling part that is really interesting, given the strongmen are not just your typical big guy that stumbles in the gym. That said, Ram weighs in at 145 lbs, while Martin steps on the mats at 330 lbs. If you take a look at the video below you’ll notice from the roll the two strongmen do between themselves that they have no idea what they’re doing. But how will the black belt fare?

As they do the roll you can hear Ram acknowledging how huge Martin is and that it is making a difference. Even though he knows nothing, Martin is difficult to escape from, especially from top positions. Butterfly hooks help Ram deal with him, and as the video goes on the rolls with the other strongman as well, trying to keep him inside the control.

What is apparent, apart from the black belt having fun and not really trying to do anything is that the strongmen are so big and strong, that they can actually manhandle the black belt. Until submissions come into play, that is.

Both. If this was not a black belt in BJJ rolling with strongman but rather a real match, to a challenging fight, I really doubt the outcome. The technique is good and all that jazz, but in a real-life scenario, dealing with such a  huge human being that is extremely strong seems like a losing battle. After all, when the strength of a strongman magnitude comes into play, technique pretty much goes out the window.

Now, combining strength and technique is something you want to achieve as a grappler. The play match between a BJJ black felt and the strongest man in the world clearly demonstrates that if you’re at any one end of the spectrum, you’ll be missing a key piece of the puzzle, You could be freakishly strong, or have incredibly great technique. Having both, though, probably requires an amount of dedication that borders on the impossible.

The best advice for grapplers is to focus on their technique while trying to keep a decent level of strength. That way, against more technical opponents, strength might help you wiggle out. Against stronger opponents, it would be a technique that you’ll turn to. Facing a strongman, though, is still an open question, at least until I can get the feel for what it is to roll with one.

It is always fun to see people trying out Jiu-jitsu for the first time. especially with athletes. However, a black belt in BJJ rolling with a strongman is a new one for me. That said, I’d love to see more rolling, than what is shown in the video, given that rolls are short and in an extremely friendly atmosphere. Perhaps, in the second part of this video, we might just see that one day.

Man Tries to Rob a Woman With a Knife in Front of Jiu-Jitsu Academy. BJJ Black Belt Subdues Him.

A Former MMA Fighter Killed in a Restaurant, the Footage is Truly Bizarre 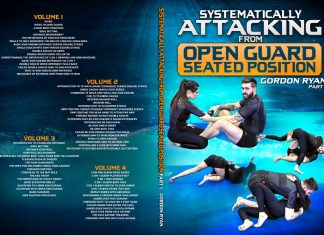 BJJ World - July 11, 2020 0
It is not like anyone thought we could actually have some time to catch a breath and finish a Gordon Ryan DVD before the...