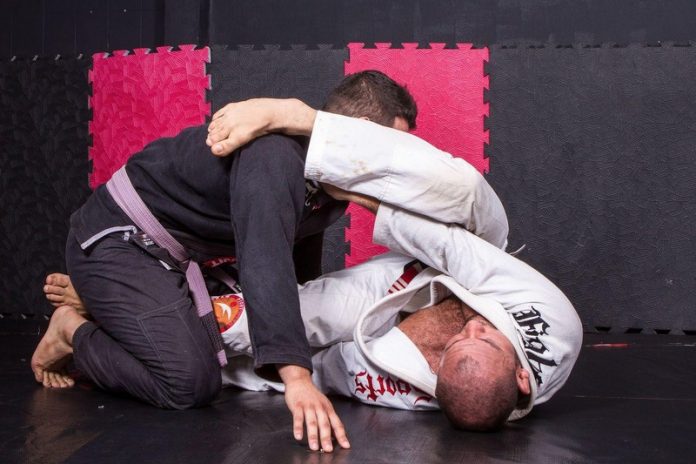 Contents hide
It is the year 2015. I just returned from a competition where I lost in my first match of the day. I was contemplating how to change my game to a more effective one in order to avoid heartbreak again. At the same time as the IBJJF tournament, I was competing in, the ADCC was happening on the opposite part of the globe. China was the host of the Brazilian Jiu-Jitsu Olympics and the biggest accolade (the Absolute division gold) went to a guy named Cyborg. I was amazed at how limber and fast this heavyweight was, while still being super powerful. So I did a little research and discovered a half guard variation that would change my BJJ game forever. I discovered the tornado guard.
What is The Tornado Guard
Tornado Sweeps
Submission Opportunities From The Tornado Guard

It is the year 2015. I just returned from a competition where I lost in my first match of the day. I was contemplating how to change my game to a more effective one in order to avoid heartbreak again. At the same time as the IBJJF tournament, I was competing in, the ADCC was happening on the opposite part of the globe. China was the host of the Brazilian Jiu-Jitsu Olympics and the biggest accolade (the Absolute division gold) went to a guy named Cyborg. I was amazed at how limber and fast this heavyweight was, while still being super powerful. So I did a little research and discovered a half guard variation that would change my BJJ game forever. I discovered the tornado guard.

The inverted guard game is a very popular one in the world of modern grappling. It is difficult to say when it all started, but we all know when it took off. It was the Mendes brothers and the Miyao brothers, spinning like fidget spinners and berimboloing around that got everyone interested in going upside down. However, the berimbolo game might not git everyone equally. It requires certain dexterity and smaller grapplers have the upper hand. The tornado guard, on the other hand, gives you all the benefits of the inverted guard with none of the strain.

“Cyborg”, or Roberto Abreau has proven over and over again that the tornado guard works at the highest levels. He used his invention to beat the who’s who of BJJ in both gi and No-Gi. What really got me interested in it was the fact that a heavyweight was doing it with ease, which meant I’d have no trouble as a featherweight. Fast forward a couple of years and people were flying left and right once they got in my half guard or Reverse De La Riva Guard. Today, it’s time to revisit the Tornado guard along with everything this position offers.

Connect your Tornado guard to a wicked Reverse De la Riva game for the ultimate attacking system from the bottom! Use “The Reverse De la Riva Almanac” DVD instructional featuring Ryan Hall’s black belt Seph Smith to get the lowdown on this essential BJJ guard.

What is The Tornado Guard

The Tornado guard is basically a hybrid between the half guard and inverted guard. To really get the hang of this guard, you’ll need to put in your fair share of drills. If there’s one drill you really need to master, it’s the Granby roll. The Granby roll is a drill in which you start seated with your legs straight forward in front of you. You then aim to touch your toes with your arms and you roll over your shoulders for a full circle. Once you’re able to do it with ease, spend some extra time halfway through the roll. This is the inverted position that is essential for the tornado guard.

For the Tornado, you start off in a basic half guard position, with a knee shield in. Probably the most important point of control is the first grip. For that, you need to place the bottom sidearm in between the opponent’s legs and grip their pants. The way you grip is also very important. What you need to do is make a pocket with four fingers in and the thumb out. You also need to grip inverted, meaning your thumb should be towards the mats and your pinky finger towards the ceiling.

Once you have the grip, its inversion time! Your other arm should grab the opposite side collar so that you have a pulling anchor. Next, you’ll kick your knee shield leg out and swing it around like a pendulum. Between the two grips and pendulum inertia, you have plenty of drive to get inverted. When you finally get there, place the shin of your pendulum leg on top of your opponent’s back. It’ll keep their posture broken as well as protect you from eventual toe hold attempts.

There are a lot of sweeping options from the Tornado guard and they all depend on what your opponent does as a reaction. Every time they attempt to push forward or stand up you can go or the basic Tornado sweep.

Finishing the basic Tornado sweep involves another pendulum-like motion with your free leg. The goal is to swing your leg in the direction of your butt, keeping it as straight as possible. This is going to give you enough force to use your other leg, the one still in half guard as a lever to lift your opponent in the air. The tricky part here is getting the angle correctly and distributing the opponent’s weight properly. Getting both is as easy as making sure that your opponent is over your thigh and not over your calf. This is going to make lifting the opponent extremely easy. the finishing position is with the opponent on their back and you on top, most likely in half guard.

In certain situations when you can’t establish a good collar grip there’s a trick to get a modified Tornado sweep. Once again, the crucial point is in the pants grip, which stays tight until you get on top. Your other grip is going on the opponent’s sleeve this time, which is going to block your leg from swinging over. So, instead of swinging, you’ll thread your leg under the far side armpit and use it to help you invert. This is going to land you in a really great sweeping position as you also have the arm trapped.

For No-Gi, the first grip is on the opponent’s ankle, and the second is behind the neck or over the opposite side shoulder.

Submission Opportunities From The Tornado Guard

The Tornado half guard also offers different submission options. They can either be done from directly, or after finishing a sweep variation. This allows you to control where the finish takes place, in case you’re in a competition format where points are important.

Getting submissions right away is the perfect option when an opponent sprawls back hard, in order to avoid the sweep. This is a good defense for the sweep but opens up a triangle. Once you see that you’re “stuck” in the Tornado position, place your top leg on the opponent’s hip. Use this a power source to extract your half guard leg and thread it under the opposite side armpit. You’ll need to control the opponent’s arm with a grip over their shoulder as well. Once you thread the leg, simply spin around to the front and you’ll have a triangle locked and ready to go.

Another great finishing option is the Kimura. This is the go-to submission after a successful Tornado sweep. The sweep itself actually lands you in the perfect position to get a Kimura. All you need to do is hold the arm you already have trapped tightly until you let go of the ankle and set up in a figure four grip. From there’ finishing is as easy as looking over your shoulder.