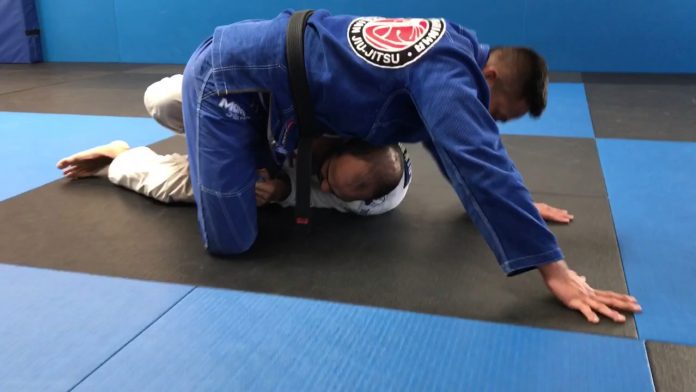 BJJ Half Guard Sweep is a great achievement once you manage to do it. Especially from Half Guard which is considered the underdog position in Jiu-Jitsu.

When we train Brazilian Jiu-Jitsu, sweeps are some of the most basic things we learn. Not only that, but we tend to stick with our choice of a sweep for quite a while. The reason behind this is that sweeps work at every level, as long as we develop them correctly. It is all about adding little details and a sprinkle of your individuality along the way. Of course, not every position is ideal for every sweep, so it is usual for grapplers to have a favorite sweep from most of the bottom positions. However, there’s one position that all but guarantees you’re going to get on top, and in a dominant fashion as well.  Doing a BJJ half guard sweep is something you learn at white belt. Doing the same BJJ half guard sweep at black belt means you are most likely unbeatable once you slap on a half guard.

The half guard is a position that is really easy to play when grappling. Most beginners get there instinctively when trying to prevent a guard pass. Although a lot of them have problems with half guard retention. As though it might look like a last-ditch effort to remain in control, it is often much better than the closed guard. The reason why people prefer to attack from the half guard is that it offers more space. In order to sweep someone, we need to create space, first and foremost. The position of the half guard allows dynamic angling that can result in a whole myriad of sweeps, in every possible direction. Even then, not all sweeps are the same and there’s one BJJ half guard sweep that rules them all!

Sweeping From The Half Guard

The reason most people look for sweeps rather than the submission from the half guard is the angle of alignment. The basic notion of the half guard is not being on your back. In the half guard, there’s no attacking unless you’re on your side. It is as simple as that. You need to be lying on one shoulder, hiding your bottom arm from your opponent. This is going to allow you to move to either the outside or the inside of your opponent. Such maneuvering means you can off-balance your opponent easily and get on top.

Speaking of underhooks, getting one is very often the crucial factor in both retaining and attacking from the half guard. Namely, once you’re on your side and you control the leg of your opponent with both of yours, you need to secure the upper body. The best way to do this is by propping up on your bottom elbow and sneaking your arm through the opponent’s armpit. The idea of an underhook is to place your arm as deep behind your opponent’s back so that you can completely neutralize one side of their body. Now you have their leg, their arm, and, with proper angling, their posture, and base. Time for the perfect BJJ half-guard sweep.

This sweep and it’s combinations are the best explained in the most selling Half Guard instructional ever. Lucas Leite’s Coyote Half Guard DVD Instructional.
Lucas Leite proved his techniques work by intentionally choosing opponents 30+ lbs heavier than him. He will usually say that his techniques work better against heavier opponents. And that’s the exact beauty of this sweep and Lucas Leite’s Coyote Half guard, it works against anyone no matter their size.
While there is really A LOT of techniques and combinations on Lucas Leites DVD Instructional we’ll cover only one situation here. The one that you’ll find yourself in most of the time. So, even if you’re not half guard player once you find yourself in half guard this sweep is something you will go for as it has the highest percentage of success and it works on anyone.

If you wonder will this work for you, the answer is simple. YES, it will because you don’t have to be big, fast, flexible… You just have to follow the instructions and once you’re in the position that’s it. If you find this sweep good for you and you decide to get your half guard game on another level based on Coyote half guard you should go for Lucas Leite’s Coyote Half Guard DVD. There is no instructional which explained this kind of sweeping better than Lucas Leite did. Lucas Leite DVD includes around 50 techniques(you can check them on THIS LINK) from half guard which complement each other.

So, if you’re not a half guard player and you need only one reliable half guard sweep this one is the way to go.

The Most Powerful BJJ Half Guard Sweep

So, what is the one BJJ half guard sweep that nobody can stop, regardless of size, experience, and/or level? Well if you haven’t extrapolated that until now, let me make it clear. Any underhook BJJ half guard sweep is going to ensure a high percentage of finishes. However, none works better, even from there, than the Dogfight sweep.

The Dogfight (or Coyote) position is named in such a manner due to the position of your legs. Let’s say you did everything right in setting up the underhook half guard. you’re on your side, you have the correct leg configuration, and you have established an underhook. From there you’re going to get on your knees. As counterintuitive as it sounds, this is the best spot to control your opponent from. In order to do so, make sure you have your underhooking arm as deep as possible with a strong grip on the opponent’s belt. You then use this grip to help you get your bottom leg out and get on your knees. If it wasn’t for the underhook and leg control, you’d be attacking from the top of the turtle position.

That said, once on your knees, with control over the leg and arm, the goal is pinching your knees as tight as possible. This takes away every escaping option your opponent might have. In order to get a sweep all it takes is to reach with your far sidearm to the far side knee of your opponent. Control either the Gi or behind the knee and pull towards yourself, pushing with your upper body and hooking with your inside leg. The result is an unstoppable BJJ half guard sweep that lands you in sid control.

Since Brazilian Jiu-Jitsu is an art that very often has surprises in store for us, in certain instances this sweep is going to be harder to execute than in other. This might be due to a very strong opponent, a very experienced one, an unnaturally flexible one or simply mistakes by yourself. Whatever the reason, there’s no need to completely bail on the sweep. First of all, there are plenty of adjustments that can ensure you reach your goal. The Dogfight position is a very secure one to wok from because it offers total control over half of your opponent’ body.

However, in situations where you’re stuck, the half guard allows you to transition into sweeps that go into completely opposite directions from the originally intended one. Let’s say you’re stuck in the Dogfight position. Now, your opponent posts an arm to base and you can’t finish the sweep as before. Keeping all the same grips you just roll under your opponent. To do so, direct the elbow of the arm that is gripping their knee in between their legs. You’re going to roll your opponent over you and end up on top in strong side control. The best thing about this BJJ half guard sweep is that if at any moment you feel uncomfortable with the roll, you can get back to the first one and finish in the original direction.

If you want to invert all you need is to switch your grip from one leg to the other. Go for the inside of the pants on the near side leg and think about getting your head in between their legs. This’ll land you in the Tornado sweep position and you can now launch them in a third direction.

The Best Half Guard Instructionals: