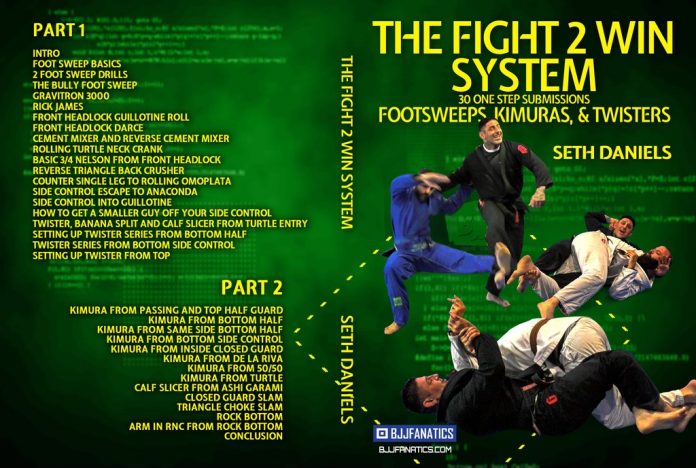 This is not just a great BJJ video instructional but also one of the best deals of 2019 so far! After all, anytime a BJJ DVD comes with a customary gift, you’re going to consider it over similar products. And, to make things clear from the start, the gift is not there to help sell the DVD. It is actually there because the guy who demonstrates the moves in the DVD is a really cool character. Actually, he is one of the leading names in the grappling competition events scene. We’ve all heard of Fight to Win Promotions, right? Well, the CEO is not only a promoter but also a very legit BJJ black belt. The “Fight 2 Win System” instructional is a Seth Daniels DVD that’s going to blow your mind!

ON SALE HERE:
Seth Daniels – A Look At “The Fight 2 Win System” (DVD/DIGITAL) 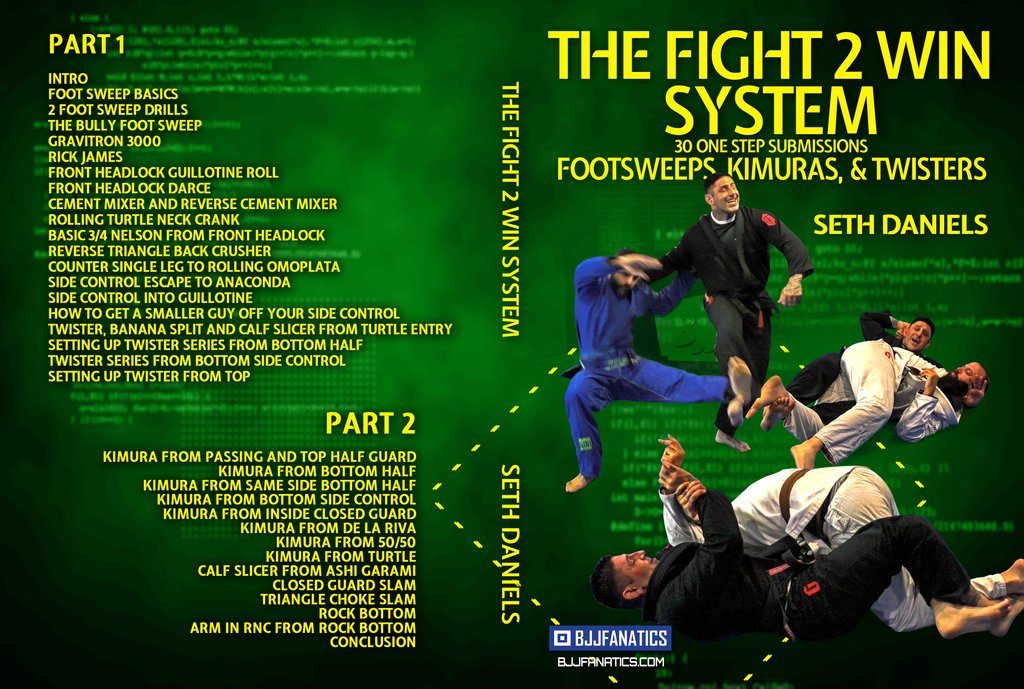 Apart from EBI founder Eddie Bravo, and perhaps the Gracies with Metamoris early on, we do not usually see event promoters get involved in BJJ directly. Fight To Win’s CEO Seth Daniels is a man that actually does it all. He organizes events, competes, teaches Jiu-Jitsu and even records BJJ video instructionals. He is one of a kind, as is the Seth Daniels DVD I’m going to write about today. Overall, Seth is a real badass and one of the best characters in Jiu-Jitsu. As such, he delivers one hell of an instructional that covers his own system and style. There is a lot of useful stuff in this one, mark my words.

Before we get into the Seth Daniels DVD let’s talk about Fight to Win Promotions. Today, grappling promotions are popping up all over the place. It seems that Metamoris created the door but EBI came kicking through it, opening the way for plenty of others. the thing is, most of these promotions come with rules of their own. Unfortunately, the rules and formats don’t always make a lot of sense or offer entertaining matches. Well, Fight to Win is different. it is different in the fact that not only is it original in every way, but it also never fails to deliver, whether you are a competitor or a spectator.

The “Fight 2 Win” format is certainly a unique one. It is a blend of things that we’ve seen in other promotions, with added elements of originality. The walkout of athletes along with songs and light shows reminds a lot of the early Pride days. The way the stage is set up is a lot like Metamoris, with grapplers competing on the podium. The promotion usually features a few super fights along with a tournament. Competitors get to compete either in the Gi or without it, and events have mixed Gi and No-gi fights.

In this format, tournaments are single elimination and are usually open style. Superfights and dedicated pro events include professional grapplers only. This allows for entertaining matches in each event, regardless of participants. The rules are pretty much IBJJF rules, with the exception that it is a submission only tournament. And, given Seth Daniels’ open-minded approach, Fight to Win is about to start with Pro Judo tournaments as well, featuring the old-school Judo rules.

The “Fight 2 Win System” Seth Daniels DVD is something of an old-school style instructional. At least in the way it is organized. In the world of highly subject-specific BJJ instructionals, it is refreshing to get one that has a broader focus. Moreover, you get some grappling techniques here that might not be common to BJJ. However, they more than work, and are a part of Seth’s immense grappling toolbox. Basically, you get a slightly unorthodox grappling system that’s going to make you much more effective in both gi and No-Gi. 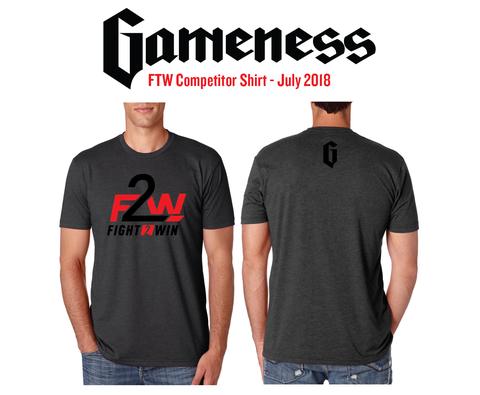 The instructional has two main parts, each coming with a dedicated DVD. Each volume is really long, covering up to two dozen chapters. While there are many different subjects and techniques, most of them do get a few chapters. This means you get variations as well as ways to incorporate them into a complete game. Of course, everything ties together very neatly. Sound and video are impeccable and Seth is one hell of a teacher.

On the subject of the gift I mentioned, with every purchase, you get a really cool T-shirt as a gift. the T-shirts are from Gameness and have the Fight 2 Win logo on the front, and the Gameness logo on the back. They come in a grey color and sizes ranging from small to extra-large.

A few introductory words are quickly followed by some standing techniques in the “Fight 2 Win System” Seth Daniels DVD. Foot sweeps to open the floodgates for a wave of cool grappling moves. Did I mention that things also have really cool and sometimes weirdly funny names? For example, some foot sweeps carry names like the Gravitron 3000 and Rick James.

A good portion of the first volume goes over variations of the front headlock position. While you might run into some of the usual fundamentals here, there are some things that’ll have you scratching your head. For example, there’s a wrestling staple that people in BJJ do not use for some weird reason. The cement mixer is one of the best ways to do dismantle a defensive turtle position. Other useful front headlock moves include, but are not limited to, neck cranks, 3/4 Nelsons, D’arces, and guillotines.

Further, in the first volume of this Seth Daniels DVD, you get exposed to some extremely effective escapes. Subjects include getting out of an anaconda choke, countering single leg takedowns and many more. The disc wraps up with a cruel submission series that’s based on variations of the Twister.

The second volume is somewhat shorter form the first chapter-wise, but at least as much entertaining. You could probably guess what Seth likes to do a lot, given that the better part of this volume involves the Kimura. In those terms, it is Kimura bonanza. There are setups from the top and bottom half guard, closed guard, 50/50 etc. The Kimura from turtle is one that is going to make you a real threat form one of the most defensive positions in grappling.

Of course, there had to be a portion dedicated to leg locks in such a versatile BJJ instructional. There are some Ashi Garami variations culminating in one of the best calf slicers you’ll ever see! Seth also goes over a couple of slams, one from the closed guard an another from the triangle choke. While both may be illegal under most rulesets, they are effective, especially in MMA. The rock bottom position along with an arm-in rear naked choke completes this one of a kind BJJ DVD.

A few words on the man behind the “Fight 2 Win System” Seth Daniels DVD. Seth is a lifelong grappler, with extensive experience in wrestling, Judo, and Brazilian Jiu-Jitsu. Today, he is the man who gives countless BJJ pros the chance to compete and earn money for their exploits. The fact that he pays the athletes as they step off the mats after a match clearly shows how serious he takes things. He goes so far he has also stepped in as a competitor in at the 11th hour. Actually, he once did so less than 48 hours after his truck got robbed, leaving him without equipment worth thousands of dollars.

Seth Daniels is one of those people that single-handedly push the professional BJJ community forward. Now he also has a hand in educating new generations. His DVD is not only a window into his system but also a great blueprint for any aspiring competitors. The blend of grappling martial arts that form Seth’s style is unique, meaning that if you can incorporate it into your game, you’ll become next to unstoppable!

ON SALE HERE:
Seth Daniels – A Look At “The Fight 2 Win System” (DVD/DIGITAL)