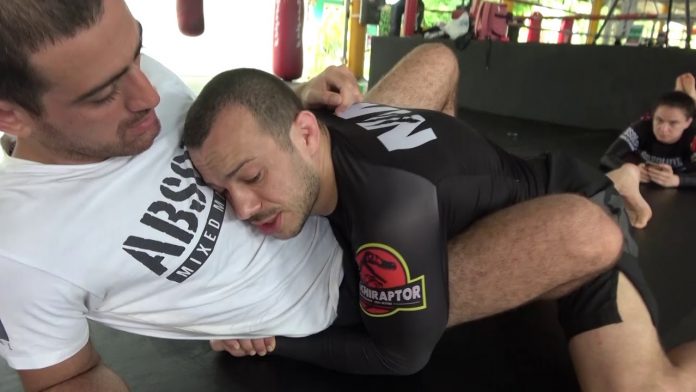 Whenever the body lock is mentioned, grapplers tend to assume the standing body lock takedown position is in question. To be honest, in most cases, it usually is. However, there’s a use of the body lock structure in Jiu-Jitsu that has a very different use. It is a great way to pass some guards that are notoriously difficult to get past. Guard Passing with the BJJ Body Lock was not something you saw every day in BJJ. However, lately, it has become a highly useful way to pass the guard, particularly in No-Gi. Whether it is the supremacy of pressure passing or simply the fact that it is unexpected, the BJJ body lock pass works! Here is what it is all about:

The one thing that can get more annoying than anything in BJJ is being stuck in the guard. From the basic closed guard all the way to modern lapel and inverted guards, not being able to pass is a real pain. Luckily, there is pressure passing to help even the playing field a little bit. Still, people tend to find ways to retain guard even against most forms of pressure passing. The main reason here is a real fundamental of guard passing – space. Space is the enemy of the guard passer. Yet, we tend to focus so much on the legs during guard passing, that we leave the upper body free to move. Hence, we get frustrated by proficient guard players. Well, the BJJ body lock is a simple solution to a complicated problem.

The reason we all love to hate pressure passing is twofold. First, you stay fairly mobile when going for a pressure pass. The second is that you’re placing your opponent under so much pressure that they won’t be thinking about the pass. Sounds perfect, doesn’t it? Well if you execute it perfectly it is going to work like a charm. But if you miss just a tiny detail, there will be space. And, wherever there is space, there’s a way to alleviate pressure.

That said, pressure passing comes in many different forms. One version is to use your shoulders to place pressure on the chest/neck fo your opponent as you’re clearing the legs. Another is to stay lower and use the shoulders to control the hips. The over/under guard pass is a great example of this. The reason none of them can compare to the BJJ body lock is that they all leave either the hip or the torso free to move. The body lock is actually as close to a pin as possible, while also allowing you to effectively get past the legs.

Certain people have built entire careers around pressure passing. Bernardo Faria is probably the most famous and effective one. The outgoing Brazilian World Champion has since decided to share ALL his guard passing secrets with the BJJ community. He is behind not only the  “Battle Tested Pressure Passing” 4 DVD set, but also responsible for the “No-Gi Pressure Passing” instructional. Both are some of the best instructionals to teach you about guard passing with incredible pressure!

The reason the BJJ body lock is going to bring you tremendous success with guard passing is because of control. This passing methodology actually takes into account two very important concepts of the top game – the strength of the legs, and upper body connection. The first one is easy – there’s no way to beat an opponent’s legs with your arms. The arms are always going to be weaker than the legs. Instead of spending them on futile efforts, you’re better off using them in a smart way. Which is where upper body connection enters the frame.

The first thing you actually need to do when passing is not to get past the legs. That’s the ultimate goal, not the first thing you need to do. Instead, acquiring some form of upper body control should be on top of your list. Of course, using your arms here is going to bring you much more success compared to fighting the legs. Out of all methods, the BJJ body lock is the safest and tightest way to make sure the torso is taken out of commission early in the exchange.

A couple of things to remember when passing with the BJ JBody lock is to stay low towards the hips. Your hand, wrist and arm positioning is going to take care of upper body mobility. If you go too high, you leave space for the legs to snake in.  The second thing to keep in mind is balance. If you truly want to pressure your opponent, you’ll need to keep your butt up. However, you can’t just tripod, or you’ll encounter the problem we just described. What you need to stay in a sprawl like position, with one leg bent to your side and the other extended.

The main difference between guard passing with the BJJ body lock and other pressure passing methods is in the hand positioning. The body lock is the only one that has your hands tied together for the duration of the pass. Actually, the one rule to always remember is to never let go of the grip while you’re executing a body lock pass. In fact, it is wise to keep a hold of it eve after passing, as you’ll see later on.

In terms of grip options, you could go for an S-grip (weaker), or a palm to palm grip (stronger). The goal is to have both your arms around the opponent’s torso, hands clasped together on the other end. A key moment is to keep the grip to the side of the opponent’s spine. If you get your hands stuck directly unred their back, you’ll most likely fail. Keep the grip to the side, so that you get more pressure and better mobility.

The elbows also play a crucial role. Staying low with the shoulders means you can use the elbows to control the hips of the opponent. This takes their legs out of commission. In most cases, you’ll have one shoulder lower and the other higher up the torso. This allows the elbows to literally control each end of the opponent’s torso.

In terms of wrapping the arms around the opponent, you have two main options. One is to wrap both arms under their arms (double underhooks). Another great option is over/under gripping when you trap one arm within your connected arms.

It is actually this over/under position of the arms that is perfect for passing the half guard. The initial use of the BJJ body lock was to deal with the half guard, especially the lockdown. However, now it also opens up opportunities to pass other guards as well. Still, the body lock is one of the best guard passing tools to use against the half guard to this day.

The pass starts with you obtaining an underhook on the near side. The one thing you need to remember is to keep the wrist of your underhook arm facing toward the opponent’s back. As you grip, make sure your other arm wraps around the far side arm. Both palms should be under the scapula on the overhook side. This is also the side to which you want to pass. The reason is that whenever you have an overhook, the opponent has an underhook they can use. if you smash it, you’ll eliminate that threat.

Finally, remember that once your’ all set with the boy lock, you’ve essentially passed the guard. Going to a tripod position (both feet down and your head on the mat) is going to allow you to pass at will. Even better, you can choose whether to end up in side control or go directly to mount.

Now imagine that you’re in butterfly guard and the opponent has an overhook. Well, that just means you’re halfway to a body lock.  With the butterfly guard, however, you want to go for double underhooks when you wrap the body lock. Also, remember to stay particularly low on the hips in order to avoid the opponent returning to closed guard. A great tip to eliminate this problem is using your own knee to stop their knee from ever coming in between. Consider this an important checkpoint.

There are two main directions you can take with this pass. One is to slowly climb up your opponent and pressure them towards half guard, where you eventually pass similar to before. The other is to go straight to a tripod and use circular leg movement to pass the legs. Whichever you choose to depend on your preferences, the opponent, and the situation you’re in. Personally, I like to climb up slowly because it offers more pressure throughout. If you choose this method, remember that to keep the pressure on at all times, you can only move hip movement to advance.

To sum things up, guard passing with the BJJ body lock is a real hack for modern grappling. It works in the Gi, in No-Gi, and across all levels. It can also work against a lot of guards as it is principle based rather than technique based. All in all, the body lock is the safest and most powerful way to utilize pressure passing. Add it to your game and you’ll soon see why top-level grapplers swear by it!