Takedowns are not the problem in BJJ. getting them is. What we don’t get is that the hardest part is setting a takedown up. The one portion of a takedowns people usually mess up is the actual shot. The shot is what connects the grips and positioning and the actual takedown. To that extent, it is also what’s hardest to time and executes. It is the one portion of takedown where people hesitate the most and it makes all the difference. Well, now you have a way of removing this obstacle once and for all. “Scientific Shots” is an Ed Ruth DVD that’ll take care of all your takedown issues for good.

There’s a clear reason why wrestlers do those penetration step drills over and over again, year after year. As BJJ grapplers we’re usually lazy and like to declare that we know something long before we even understand it. Rolling usually allows for plenty of adjustments or introducing strength and even luck. After all, getting a scramble after a failed attempt might just land you in a neven better position. Well, with wrestling, there’s no way around certain points of the techniques, such as shooting. the thing is, nobody before this Ed ruth DVD has ever explained shots so clearly. at least not publically, anyway, which is exactly where the ‘Scientific Shots” instructional comes in.

Ed Ruth is certainly enjoying life as of late. Just a week ago he got a second-round knockout win over Kiichi Kunimoto at Bellator 224. He is currently on the rise in Bellator, with a pro-MMA record of 7-1 in the middleweight division. Having dabbled in welterweight as well, Ruth is anything but one dimensional. If you take a look at his pro-MMA record, you’ll notice a bunch of TKO and KO wins. Most of that is down to his boxing experience, but where he truly shines is actually wrestling. Ruth is a 3 time NCAA champion, wrestling out of a real lions’ den – Penn State. He also represented Team USA at the World Wrestling stage on a couple of occasions.

Ruth has always enjoyed martial arts. As a little kid, he spent most of his time playing with stuff like staff and nunchucks. He then discovered wrestling at high school and never looked back. After Penn State, he transitioned successfully into MMA and is no one f Bellator’s top prospects. The 28-year-old is also enrolled in BJJ although still quite far from being a black belt.

What he is a black belt in, though, is definitely wrestling. His entire career he was an extremely feared wrestler, particularly when it came to takedowns. He has a way of reaching the legs long before people know what is happening. It is like he’s there one moment and the next he already has both your legs wrapped up. Now, finally, Ruth decides to share it with everyone through the ‘Scientific Shots” Ed Ruth DVD. To be honest. I’ve never seen anyone do an instructional on shots before, so I decided to give it a try. Suffice to say I did the right thing.

A Review Of The “Scientific Shots” Ed Ruth DVD

This is not the first Ed Ruth DVD instructional I’ve reviewed. he also has a wicked instructional on cradles that I recommend to everyone involved in either wrestling, BJJ or MMA. So, I already knew what to expect to a certain point. technically speaking, you can’t go wrong with an ed Ruth DVD. it’s not just about camera work and the microphones, that stuff is now down to a science. It is how Ruth approaches teaching that gives everything a very different perspective. Well, t least in my case, but I’ve never really been a wrestler to start with.

This DVD instructional runs at just above two hours and has two parts to it. the subject is an unusual one, but it shows how knowledgable Ruth is. You might not want to pick up a DVD that only looks at shots right now, but trust me, stay in grappling long enough and you’ll be looking for it everywhere! The first volume covers some basic shot setups from collar ties, as well as some crazy traps. The second one takes care of a bunch of different shots that pretty much guarantee you’ll end up with a takedown. Furthermore, there’s hardly a takedown that is not covered in this two-part instructional.

As far as wrestling DVDs go, there’s one main difference compared to BJJ – there’s no lengthy introduction. Wrestlers like to get right down to work, much like on the mats. This Ed Ruth DVD is no different, and he goes right into collar ties straight off the bat. The first couple of chapters cover how to transition from a post to a collar tie, which is the first step to setting any shot up. As ruth states, unless you get the grips, there’s no point in actually shooting.

Speaking of shooting he opens the account by explaining how to do a rollout ankle pick in a few different ways. the best part, however, is the one that comes next. The chapter’s name sounds enticing enough – the misdirection double. Let me just say this – when you use this setup people are going to expect you to do anything but a double. And that’s the beauty of it! A few Ed Ruth specials also feature here, as a standing cradle to a badger trap and some neat arm drags that BJJ folks, in particular, will love in the “Scientific Shots” instructional.

In the second portion of the “Scientific Shots” instructional, Ruth focuses on providing lots of variety. Here, the focus is once again on the shooting portion of things, but the finishes vary a lot. This means you can get a bunch of different takedowns with easy, thanks to how Ruth breaks down shots. The reverse neck pinch is one of those moves that looks like something out of Star trek. ti is based on pressure to the enerves but works like a charm, to say the least. I have to admit, as a big fan of trips, I particularly enjoyed the portion on trip variations.

The high crotch series is also one to keep an eye out for. Don’t let the DVD fool you, although it is only one chapter, Ruth goes deep into it! He covers a whole host of high crotch setups, from initial setups to the perfect way to shoot. ON top of everything, he covers shot finishing in a different chapter, breaking it down to the finest details. An outside shot to a single leg along with a few more nasty ankle picks and arm drags completes this volume. In fact, the very last chapter is all about clearing collar ties, in order to either re-engage or shoot ina very sneaky and effective way!

Before I picked this Ed Ruth DVD up I had no idea how important the actual shot was. As it turns out there are precision and finesse to it, rather than just exploding and hoping for the best. Still, the “Scientific Shots” instructional is definitely one of a kind and not your usual wrestling DVD. There’s no good reason not to have this one, and a whole bunch of great ones to add it to your collection. In other words, if there was ever a shortcut to learning wrestling takedowns for BJJ people, it is this one! 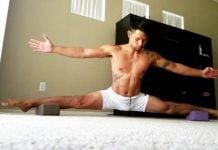