A few years ago I got stuck with passing the guard. The knee shield/ Z-guard, in particular, started giving me nightmares, as it became a thing in the grappling world. Conversely, I tried everything I knew so far (an early purple belt at the time) to get out of my conundrum. The answer came completely unexpectedly but solved all of my guard passing troubles and then some! What happened was I came across an old wrestling move that, with little modification, works perfectly for BJJ – the cradle. As I learned, many grapplers use the cradle across all grappling martial arts to great success. Normally, seeing an instructional dubbed “The Cradle machine” got me salivating with anticipation. Even more so when I learned it is an Ed Ruth DVD.

The Cradle Machine Ed Ruth DVD is one of those that you’d probably pass while scrolling through the latest grappling instructionals releases. Well, I sure hope this review is going to change your mind. this grappling DVD instructional is an unbelievable tool for anyone who likes to pass the guard right into one of the tightest top control positions there is! And no, to lift your concerns, the cradle is not just a pin. It may be so in wrestling, but in BJJ it opens doors many never knew existed! Check it out for yourself and you’ll see what I mean.

Ed Ruth is one of those characters that really have an incredibly well-rounded game. Currently, he is on the Bellator roster and has an impressive record of 6-1. He amassed 6 straight wins inside the Bellator cage,  five of which by way of TKO/KO. His only loss so far came in his last outing in December of 2018 against Neiman Gracie. That said, there’s a lot more to come from the 28-year-old welterweight.

So, home come we’re looking at an MMA guy’s instructional here? Well, before we get into the Ed Ruth DVD itself, you should probably know a few things about him. First of all, Ruth is a top class wrestler, one of the best ever to come out of Penn State. He used to wrestle in both freestyle and folkstyle, giving him an extensive wrestling background. In fact, he is a three-time Division One national Champion in folkstyle wrestling. That is exactly the person you want to be learning wrestling from. More importantly, he is the perfect man to teach you a versatile move like the cradle, on that works on the BJJ / wrestling mats and in the cage.

Ed’s wrestling skills are definitely right ou there with the best of them. His knowledge and understanding of the cradle position, though, makes him stand out from the crowd. Moreover, his experience in wrestling, MMA and recently, BJJ, put him in prime position to adjust the move according to needs. The “Cradle Machine” Ed Ruth DVD does just that. It brings a wrestling classic back into play thanks to the innovative approach Ruth has. It’d be a shame to miss out on this instructional, trust me!

“The Cradle Machine” is a two-part DVD set that I cannot recommend enough. It comes to us courtesy of Ed Ruth, the man who is himself a cradle machine. I’ve never seen an instructional video by Ed before, to be honest. I’ve seen him fight in Bellator, and thought he was really explosive and fast. I later learned that he is an accomplished wrestler, which made al to of sense. Well, in this Ed Ruth DVD, he also proves that he is just as good of a teacher as he is a fighter/grappler. He has a way with words and makes everything make sense from the start. Moreover, he likes to show how moves progress from old-school classics to modern day modified killer ones.

The set is filled with information divided into two distinct volumes. Each volume goes over a series that is a part of the cradle system. In the first, it mostly the cross-face cradle and all the options it brings along. It contains a total of 8 different chapters and runs at just about 26 minutes. Volume two is a bit longer, nearer the thirty-minute mark. It has 9 chapters that mostly focus on tilts and the front headlock. All in all, the perfect combination of cradle-based moves to integrate into any game, BJJ or MMA.

As I mentioned, the first volume of this Ed Ruth DVD covers everything cradle related, fro the basics to crazy advanced finishes. In case you didn’t know, the cross-face we all love to use actually comes from wrestling, Moreover, it is a move that’s closely associated with the cradle. In terms of the basic wrestling cradle, it is almost always available in BJJ form the top half guard position. What’s even better, you can attain it fairly easily against opponents of all ranks. That said, Ruth provides some key grip placement advice that’ll revolutionize the power of your grips.

There’s a whole bunch of cross-face cradle progressions and options. There’s the Ed Ruth cross-face, the overhead cross-face and a few more. Further along in this volume of “‘The Cradle Machine” you also find the drop cradle.  This is a move that’ll revolutionize your turtle attacks. Not only that. but Ruth also demonstrates how you can use it as an extremely effective takedown. A few submissions also find their way here, like a brutal neck crank. Another hugely useful chapter is the one on using cradles to do smooth transitions.

Tilts are another staple of wrestling and not something BJJ people usually consider. This is what is going to give you a huge advantage over your opponents. That said, tilts are also a position that’s usually available before a cradle.. That opens up even more options for you, as connecting both give you both control and a very attacking top position. And this Ed Ruth DVD does it all for you.

Volume two starts with an overview of the tilt series. A few variations pave the way for some more applicable stuff, like the bar arm or wrist roll tilt All tilts have the same goal – open up a turtled or belly-down opponent. As such they’re the perfect tool to add to your BJJ arsenal.

Another thing that’s in this volume apart form tilts is a portion on headlocks. This series shows a few different variations of some slick headlock wrestling moves. What you get from them are different ways of busting open a very defensive opponent. Mind you, most of them, like the head and arm and the cement mixer ar rolling ones, meaning once you get the hang of them, nobody will be able to resist them.

The Cradle machine is not just another grappling instructional. it is perfect for wrestlers, BJJ grapplers, and even MMA fighters. In fact, it has all the hallmarks of one of the best instructions of this year. As someone who relies heavily on the cradle in my Jiu-Jitsu game, I cannot recommend this Ed Ruth DVD highly enough. Even if you’re not a fan of the position you’ll learn helpful moves that’ll surely be useful to your game. 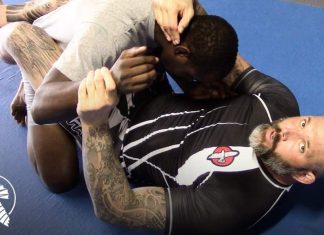 0
If somebody asked me to choose one coach that I'd like to go and spend some time with, surprisingly it wouldn't be Danaher. All due...