One more in a long line of half guard instructionals that’s going to go over the same old moves over and over again. Really is there anything left to learn about the half guard bottom position? The answer is a firm and definite yes! There’s not just more to learn about the position but there are different things to learn. It is not al about gripping and getting that elusive underhook when you’re on the bottom. If you really want your half guard game to be different and scare the living daylight out of everyone, you need the “Pillars: Half Guard Bottom DVD” by Stephen Whittier. Read on to discover why.

BJJ is truly amazing, isn’t it? The moment you think you have something figured out, you discover a new aspect to it and you go right back to being a beginner. This is true for every technique, but more than anything, it’s true in terms of some of the most basic positions. The half guard is a great example. Just when you think you got the hang of it all, from tornado guards to butterfly half guard and the Coyote guard, a different aspect of the half guard emerges. Thanks to the Pillars: Half Guard Bottom DVD” courtesy of Stephen Whittier you now have an incredible resource available. Why is it so different than others? Well, for starters it is all about the invisible JIu-JItsu behind the half guard positions. Rings a bell?

Ther are certain black belts in the world that we’d all love to be able to learn from. It just so happens that those few that are on everybody’s grappling bucket list ar the onest that are most secretive about their ways. Who knows, this secrecy might just be a part of the charm, who knows? The fact of the matter is that if you get to spend a day with the likes of Marcelo Garcia, Rickson Gracie or John Danaher, you don’t know where to start. Given the large interest and the fact that they all run highly successful academies, BJJ instructional are the best way to gain insight into their systems.

The problem is that coaches of that caliber, usually stay away from producing instructionals that cover their entire system. Danaher now has an incredible DVD collection that’s growing every month. He is also probably the only one that doesn’t spare many details. In the case of Marcelo though, his online library offers only snippets of moves, without something to connect them. And, in Rickson’s case,  you’d be hard-pressed to find anything you can make sense of in video format. This is where proxies come in.

The best way to learn Marcelo’s, or in our case, Rickon’s take on a particular move is by using high-level black belts from their system. Stephen Whittier is a black belt under Chris Haueter and is a part of the SBG family. That means he has lots of time training with the likes of Matt Thornton and Henry Akins. In other words, he really understands and, more importantly, knows how to teach the fundamental concepts of Rickson’s style. To a certain extent, this “Pillars: Half Guard Bottom DVD” is an instructional that covers subjects of the position nobody has successfully taught before.

It seems Stephen Whittier, a 3rd-degree black belt, second only to Matt Thornton in the SBG chain of command is on somewhat of a run. He has been tirelessly releasing DVD instructional, most of them as part of the “Pillars” series. Just recently I came across his takedown DVD that’s a part of this series. It seems now that he is complementing it with the absolute best half guard bottom DVD to ever come out!

This instructional is actually the perfect blend between a technical and a conceptual BJJ DVD. You won’t get a lot of philosophical talks here, nor is it just chapter by chapter of unrelated moves. Instead, this is a well-0rounded approach to being effective off the bottom half guard. That means being able to retain the position, recover if needed, avoid passes and smashing and being able to sweep and/or submit or get to a better position (mount or back). The instructional has a total of 5 parts, each lasting around an hour and a half. That right there is more than 7 hours of high-quality material on the half guard, from a perspective nobody has covered before!

The way Stephen Whittier opens up this instructional is slow. He covers basic stuff like defending head control and positioning your arms to build frames. This is all stuff you’ve seen before right? Well, you’ve seen them done, but you’ve never heard anyone tall you why you do a particular thing and what’s the underlying idea behind it. 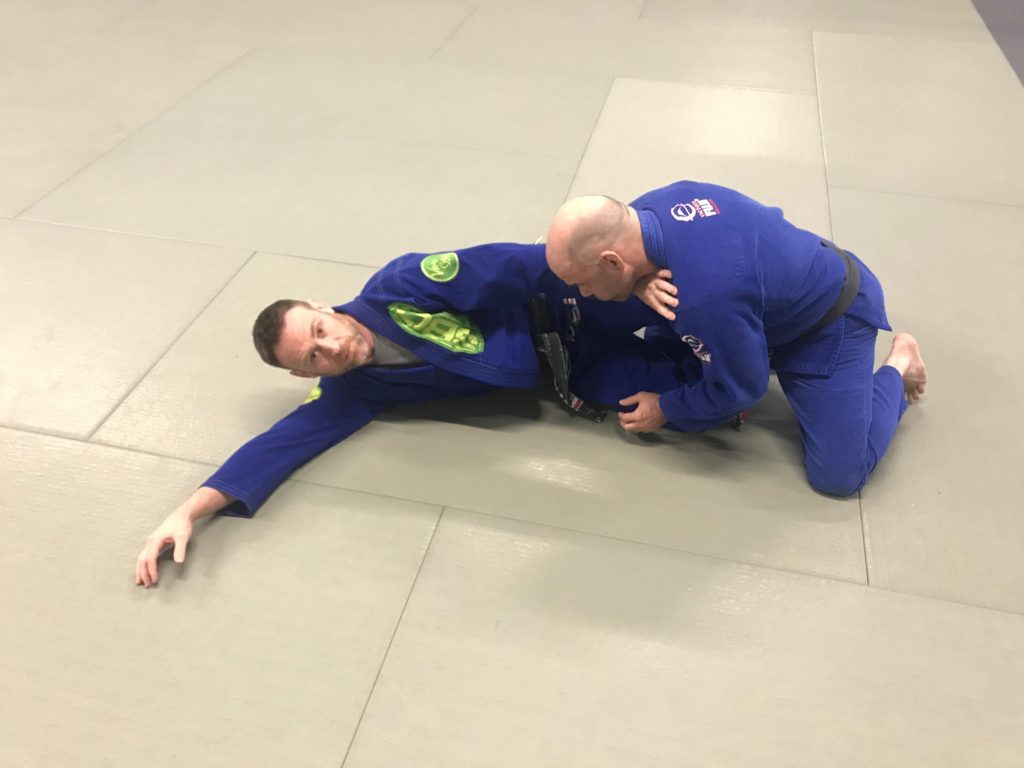 As this volume goes on, more basics come to our attention. Ways to get that elusive and tricky underhook also make an appearance, although II have a feeling these might just be the ultimate solution to this common problem. The one chapter in this part of the “Pillars: Half Guard Bottom DVD” that is worth getting the entire set is the one on bridging. As you’ll learn, after going over how to connect to your partner, there’s a time to bridge and a time to shrimp. And nobody can teach you which is better than Stephen Whittier. Guard recovery nad pulling half guard are the chapters that help complete this opening volume.

In the second volume, bridging makes a comeback, although now in a much more detailed fashion. The bridge and roll is an essential half guard bottom move. Moreover, it’s not just something that stops working after the blue belt. As you’ll see from Whittier’s demonstration, you’ll be able to do it on the highest-level people in your school, once you understand it.

The main subject of DVD #2 in this set is actually passed prevention and retaining the half guard. Form preventing the knee slice pass, to using frames in a much more intentional manner, it is all in here. Speaking of frames, creating them with your hips and shoulders is definitely something never seen before. Hook sweeps, featuring everyone’s favorite butterfly half guard complete volume two. However, expect a much more fundamental approach here, as opposed to the flying rolling leg locks one we’re all used to.

Part 3 of the “Pillars: Half guard Bottom DVD” goes into another huge concept of Rickson Gracie and SBG Jiu-Jitsu – posture. To be honest, posture is a key element of BJJ in general, it’s just not to the forefront of things. The “Stayin Alive” posture is one concept you’ll never ever forget again. Not to mention that it’ll revolutionize your half guard.

Reversal also makes their way here, from simple versions all the way to reversing the Whizzer. Do not be fooled into thinking you can go straight to these moves though. All of them employ stuff that Whittier covers previously, from bridging to the ‘Stayin Alive” posture. The best part? The chapter near the very end of this volume where Whittier tells you how to combine sweeps. This is not just another sweep chain from the bottom half that your opponents will quickly figure out. It is the most foolproof way of sweeping ever devised for BJJ!

The first chapter of volume four actually has it’s rooted in the final one of the previous volume. Whittier likes to connect not only stuff within a volume but the parts of this DVD themselves! The subject here is getting to the back. The way of getting there is by passing the arm, foolishly simple yet incredibly potent! 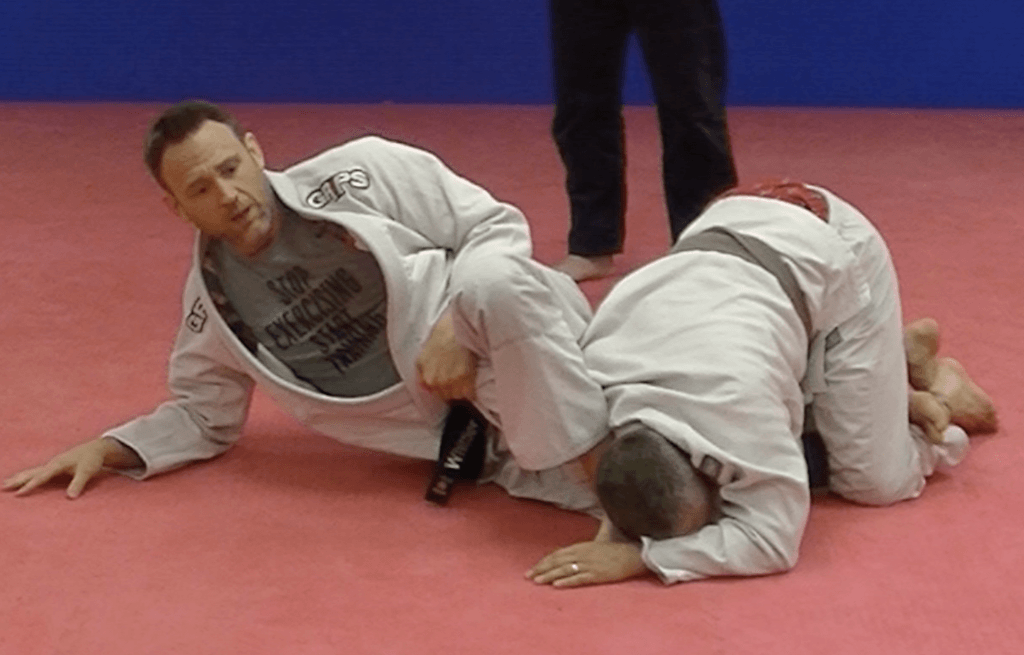 After the back take, the focus switches to another aspect of half guard hat nobody thought of covering before. What do you do when you run into counters to your common sweeps? Well, if those sweeps are the hip bump, and back roll sweeps, you pick this Stephen Whittier instructional up. Moreover, you get a few more bonus ways of getting to the back. AS if this was all not enough, this is the spot where the “Pillars: Half guard Bottom DVD” starts looking at submissions. The Kimura and Guillotine are first on the schedule here. From basic setups to painful finishes and ways to shut down every counter, this will skyrocket your submission rate form the half guard. Plus, both subs tie in perfectly with the sweeps Whittier shows.

The final portion of this instructional is something truly special. The first half of it goes on with submission attacks. Why stop at the guillotine and Kimura when you can hunt for loop chokes, Omoplatas and triangle chokes? The triangle finishing details will completely blow your mind!

Still, just when you thought Stephen Whittier was over, there’s more. The secrets of the Z-guard are the next to be revealed. If your knee shield is suffering, this DVD is the cure. From brand new details on setting everything up, all the way to underhooks, reversals, and sweeps, there’s an entire mini system in this volume. Also, Whittier explains one more highly elusive aspect of invisible JIu-JItsu – the connection principle. Given that he explains it in a half guard sense, it makes a lot of sense compared to broader conceptual explanations. In fact, it is with the subject of connection that this “Pillars” Half Guard Bottom DVD” ends on the highest note possible.

It is hard to get the right DVD nowadays, with the BJJ world flooded with titles. Still, sifting through all the clutter, there is an instructional here and there that’s really going to matter, regardless of your level. Usually, Stephen Whittier has more hits than misses and this last one is probably his best work so far! The “Pillars: Half Guard Bottom DVD” is instructional for those that really love playing the position. This is not just a half guard BJJ DVD this is the blueprint to achieving greatness from the position! 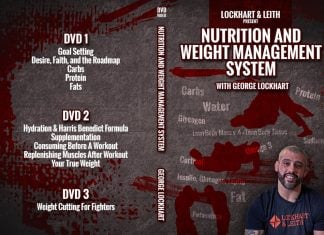 0
George Lockhart and Leith - Nutrition and Weight Managment System. When nutrition for combat sports is the subjects there's an endless pool of information...