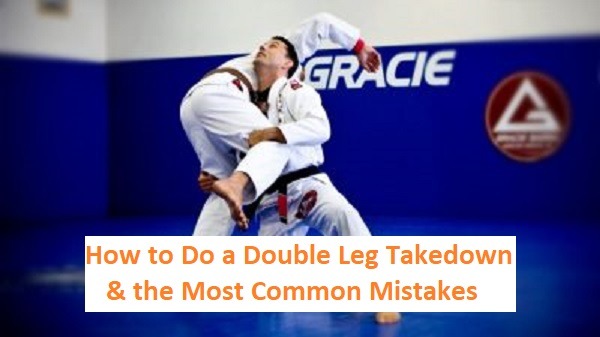 Double Leg takedown is one of the most reliable techniques in grappling martial arts in general. It is one of the best and safest ways to take the fight to the ground. When done correctly, it is a low-risk high-return move that lands you in a dominant top position on the ground. It requires very high technical knowledge of the move in order to use it against another trained grapplers so mistakes are very common. And Double Leg Takedown for BJJ is a whole another story.

Have you ever watched a wrestling match? Be it at the gym or in competition, there’s one move you’re going to see most of the wrestlers’ attempt. It is the staple of the takedown game and real wrestling classic. Not only that, but it is a large part of Brazilian Jiu-Jitsu as well. While it is more useful in No-Gi, it can also be brutally effective in the Gi too.

Double leg takedown technique takes years to master, in both wrestling and BJJ. There are a few main aspects that make this move a complex one. While the notion is easy, grab both legs from a lower-level position, getting there, staying safe and finishing takes experience and the ability to adjust. There are plenty of different variations of the move that often times need to be connected while attempting to execute it. All in all, here’s a reason why wrestlers spend countless hours polishing up one of the very basic techniques of the sport. As Jiu-Jitsu practitioners, we shouldn’t take this move for granted. We need to respect the king of takedowns and put the reps in to achieve mastery of the move.

Double leg takedown is as old as the sport of wrestling itself. The move can probably be traced all the way back to the first Olympic games. As effective a move as it is, it is not limited to wrestling, though, Historically, before the change of rules, this technique was also a part of Kodokan Judo as well, where it was known as Morote Gari.

For the DLT, a grappler needs to have both their arms around an opponent’s legs. The basic idea is to lift the opponent off the ground in order to take them down on their back. There are a few very important elements to the traditional wrestling double leg takedown. First and foremost, you have to change your level in order to be able to get to the opponent’s legs.  Going as low as possible without blocking your movement is highly advisable. next, you’ll need to “shoot in” towards the opponent, shortening the distance. The shoot is what gets you in position to put together the structural components of the DLT.

How to Do Double Leg Takedown Effectively

Avoiding The Most Common Mistakes

Learning the double leg takedown is a definite must for anyone involved in grappling martial arts. That said, learning it mistake-free often presents a real challenge. However, if you are aware of the possible mistakes, while you’re learning the move, you have a much better chance of weeding them out before they become a bad habit. So, the most common mistakes when doing DLT are:

If there’s one thing that BJJ athletes need to do to improve their takedown, it’s drilling. Wrestlers spend countless hours drilling any wrestling technique or its specific elements. In BJJ, people tend to be sloppy with a lot of techniques, diminishing its effectiveness. The first thing that needs focused attention is shortening the distance. The best way is to learn the proper technique behind the penetration step. This is a move that is designed to change the level, bring you in close and offer an opportunity to use inertia to your advantage.

In BJJ, due to the versatility and rules of the sport, DLT is much more important than in wrestling. When doing Jiu-Jitsu, this move can be done from both standings or from a bottom position, given the circumstances. From the top, the penetration step makes all the difference. Furthermore, finishing by going for a lift might be a better option here. When grappling with a Gi, allowing the opponent to establish grips can be very dangerous. The Gi opens up a lot more choking and countering options than just the Guillotine chokes, so you have to finish the move as fast as possible. All the other basics apply, just remember to get in fast and finish powerfully.

Double Leg Takedown from the Bottom in BJJ

DLT in BJJ can also be done from the bottom, in a low-double variation. This takedown is accessible from a wide variety of open guards common to Jiu-Jitsu. Due to its mechanics, the Half Guard is the best position to attack from. A good underhook from the bottom half guard is crucial to transitioning into a low double. Finishing requires you to pick your opponent up or move in a circular motion to complete the takedown.