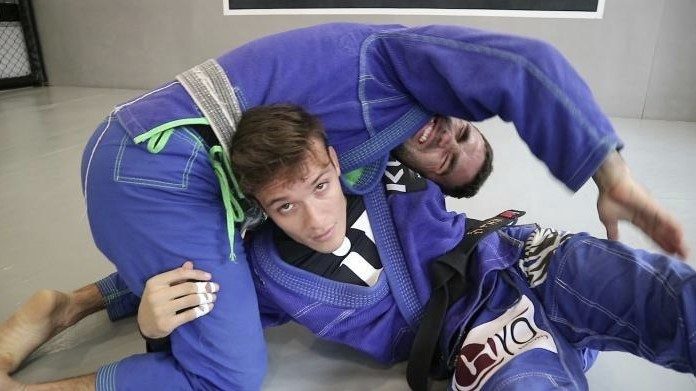 When it comes to submitting people in BJJ the choke is the ultimate weapon. A choke leaves no doubt as to whoever won. Some people are quite resistant to joint locks, and might even be willing to let something snap. In those terms, there is one choke submission that’s pretty underrated but is as efficient and as tight as any other in Brazilian Jiu-Jitsu. It is the one and only Loop Choke.

Strangles are as close to killing someone as you can get, without legal repercussion, of course. When a person taps to a choke, they attest to the fact that you had their life in your hands. As far as chokes go BJJ can boast that it arguably has the largest number of strangling techniques in all of grappling martial arts. A big reason for this is the utilization of the Gi for a number of different chokes. And that’s where Loop Choke comes in as the ultimate Lapel Choke Submission.

The loop choke is one of those chokes you learn at an early “grappling age”. It is not quite considered basic, but it’s right there among the fundamentals. People often forget about really fast and tend to go for bow and arrow or other fancy lapel chokes. How efficient this move is in high-level competition has been proven by those who stick with it. It is really uncanny how underrated and underused this choke is seeing as you can hit it from almost every position in BJJ.

Setting The Loop Choke Up

Loop choke is a Gi-only choke that works really well in Jiu-Jitsu. The idea, as with any lapel choke, is to use the opponent’s own Gi against them. For that to work, the lapel has to be positioned properly and tightly around their neck. For the choke to work, apart from grips, body positioning has to really be spot on. But let’s look at each and every one of these aspects more closely.

The loop choke submission starts and ends with the grips. Or better said the grip. One of the main differences between this submission and other Gi chokes is grip depth.  Almost every choke In BJJ needs as deep a lapel grip as possible. This choke is on the other side of the spectrum, requiring a mid-level grip in terms of depth. Too much depth and you won’t be able to hold it because of the pressure on your wrist. For the best grip go for a collar bone-level grip.

As far as body positioning goes, the loop choke requires a gator roll-like movement in order to finish. From a front headlock position, with the grip in, the aim is to go under. However, unlike a rolling anaconda choke, with the loop, you need to go perpendicular to your opponent. To do so, when you roll under, the aim is to thread the head near their hips.

One more thing to note is the placement of your free arm. It needs to go under the opponent’s armpit all the way to the back of their head. This is where a lot of the tightness comes from.

And for all those No-Gi only grapplers out there, remember that the Guillotine is always there without the GI.

The half guard is one of the bread and butter positions for executing the loop choke. It can be done from both the top and bottom of this position, but for now, we’ll stick with the top.  A great position to start from is with a strong grip on the opponent’s lapel. In order to set it up, you’ll need to switch your base and get a guillotine-like grip around the opponent’s head. Furthermore, you’ll use the arm that’s strapped around the head to get the grip on the lapel. From there, an underhook from your opponent is just going to make things easier to finish. In the worst-case scenario, you’ll free your leg so that you can either stay in side control or finish from a front headlock position.

One of the most effective ways to get the finisher is from the front headlock position. Conversely, the sitting guard and/or butterfly guard are also great positions to hunt from. The first thing to get is the grip on the lapel. It offers both control and a lever to finish the choke. From all of these positions, it’s all about correct rolling and head pressure in order to finish. Do not be hesitant to roll under your opponent, as you won’t stay on the bottom. You’ll just end up on top with a tight choke on.

For those that are into flying submission, it is a comfort to know that you can hit this submission from standing as well. While it is not “flying” per say, it comes pretty close. A snap-down is all you need in order to get the lapel grip and gator roll your way into a win.

Setting Traps From The Bottom

While effective from the top, the loop choke is also the perfect bottom side trap. AS with the top, the bottom half guard offers a great opportunity to slap the choke on. Instead of looking for an underhook, make sure you have a tight grip on the opponent’s far side lapel with your near sidearm. A push with the arm is going to cause the opponent to push back. This is the momentum you need to loop your arm around their head. There’s no need to leave the half guard in order to finish. Just thread your arm through and it’s a tap.

The closed guard is another common position for setting it up. It is even easier to set it up from the full guard than the half guard since people do not pay too much attention to a lapel grip from there. Especially when it is a shallow grip. While staying in closed guard, the goal is to break your opponent’s posture so that you can thread your arm through to the back of the head. Sitting up slightly to cover more space is a good trick to make things even tighter.

The Sickest Loop Choke ever made by Alexandre Vieira:

Without a doubt, the most savage loop choke you’ll ever see: Alexandre Vieira puts his opponent to sleep in less than one minute at Tokyo Grand Slam. Also, don’t forget to check Vieira’s Instructional on that choke and many others.

The Most Savage Loop Choke You'll Ever See

Without a doubt, the most savage loop choke you'll ever see: Alexandre Vieira puts his opponent to sleep in less than one minute. View more event highlights from the Tokyo Grand Slam on FloGrappling.com

We have to mention the NEW Alexandre Vieira DVD – The Crucifix and Loop Chokes. If you’re interested in loop chokes of all kinds and also the crucifix position I must say there is no better instructional anywhere around than Alexandre Vieira DVD is. It’s an instructional with so many techniques (check techniques list) and so many options to get the loop choke from any position that it’s a real game-changer. I won’t even mention the crucifix position because Alexandre showed the ways of getting there so easily that it’s almost impossible to defend it. Make sure you check it HERE if you’re interested in crucifix position and loop chokes.