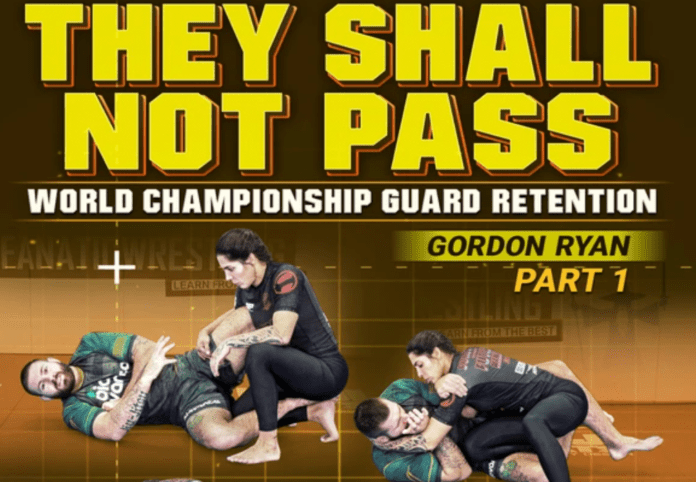 There’s a new Gordon Ryan BJJ DVD instructional. I remember when statements like this were the news of the month. Now, it is just another thing that regularly happens – a DDS DVD. However, it is not just as easy to glance over the material that the DDS is releasing. After all, we’re talking about the best in the world, both in terms of coaching and competition, at least at the time being. This instructional is also not just another guard retention instructional. “They Shall Not Pass” goes way beyond that, both in terms of material and the amount of information it contains.

ON SALE HERE:
Gordon Ryan – They Shall Not Pass Part1

People are usually so obsessed with how Gordon Ryan and the rest of his teammates are attacking and finishing people, that they miss out on how positionally sound their game is. Of course, a lot of it has to do with the conceptual teaching framework that John Danaher utilizes. However, while he may lay the foundations, Gordon certainly adds to them by introducing his own concepts. Conversely, this latest Gordon Ryan BJJ DVD “They Shall Not Pass” is guard-related and has to do with guard retention without the Gi.

The Most important Thing About Playing Guard

Why is the guard such an effective position in BJJ? Well, it offers you safety, along with a couple of offensive options – sweeps and submissions. So, why do people often fail with their guard, particularly in an offensive manner? Simple – they have no idea how to maintain the guard’s optimal structure. Basically what most people do is establish a good guard and then completely dismantle it when looking to attack. Hence, the most important aspect of the guard in BJJ (any guard) is to be able to maintain it both when you’re defending passes and when you’re attacking from it.

When guard retention is mentioned, most people immediately think defense. That is not necessarily correct. After the moment of establishing a guard,  everything that happens in that guard requires you to be able to retain the position you have achieved. Makes sense, right? Retention is actually the biggest part of the puzzle with guards. Once you know how to retain a guard, you can both defend against passing attempts, and attack with sweeps and submissions of your own.

When you change the way you approach guard retention, you will also find that you will succeed with it a lot more. Now, this new Gordon Ryan BJJ DVD addresses retention from this aspect, rather than just the traditional defensive one. In other words, once you’re clear on the underlying concept of retention, picking the They Shall Not Pass DVD up will help you develop that unpassable and dangerous guard game everyone is after.

“They Shall Not Pass” Gordon Ryan BJJ DVD Review

What you get with this Gordon Ryan BJJ DVD is exactly that – a Gordon Ryan DVD. There hasn’t been a bad one yet, and he has more out than I can count. Similar to all the others, there are 8 volumes in this No-Gi instructional, with the material carefully structured in a progressive manner. The usual live rolls and commentary rounds are also there.

The progression Ryan follows in this instructional starts with the gals of both the top and bottom person involved in the exchange. He then covers using the Ashi Garami as a means of retention, before focusing o unspecific scenarios involving common passes. A final couple of volumes feature Ryan rolling with different people while using everything outlined before, followed by him narrating and explaining in detail everything that is happening during live rolls.

1. The Fundamentals Of Guard Retention

This Gordon Ryan BJJ DVD begins in a typical fashion, with him introducing the subject matter and literally explaining the most basics things possible – who is on top and who is on the bottom, and what they’re both after. This is probably a good post to mention that Ryan often refers to the concepts he shares in his passing DVD like loose and tight passing.

A couple of the important things he covers is how the bottom person should react to both loose and tight passing. There’s also a discussion on some keyguard concepts like concave shoulders, inside position, and hiding your jaw.

Halfway through this volume of the instructional, Gordon dissects loose passing and offers plenty of opportunities to stay in guard from the seated position. Stance, distance management, grip strategies, and all the usual stuff is in there, as expected. The innovative things come in the form of foot positioning and dealing with flanking while seated against a loose passer.

The Ashi Garami done from the bottom is pretty much an X guard variation. So, in this portion of they Shall Not Pass, Ryan treats it as a guard, offering an interesting take on it – grouping Adhi Garami’s according to the needs presented by the actions of the top person. He also asks some key questions, like for example, the role of leg entanglements against loose passing.

The majority y of this DVD looks to the groups of retention tactics Ryan has created and their relation to forward steps, back steps, and recoveries against specific grip configurations. The entire volume is a brand new way of thinking and approaching guard retention and is that missing links between playing guard and doing leg locks.

3. Dealing With The Split Squat

One of the main positions Ryan demonstrated in his passing DVD was the split squat position. The new Gordon Ryan BJJ DVD solves this particular situation by exposing its “weak spots” and exploiting them to stay in guard at all costs.

Once again, the central question is how Gordon begins, offering several different answers and solutions along the way. The split squats not a pass in itself, but more of a launching p[ad fr plenty of different passing systems. Gordon’s take o retention is that if you position yourself so that you prevent passes from ever launching from the split squat, you will have an easy time fo staying on guard. Dealing with actual passes like the knee cut as a means of late guard retention also features here.

This volume wraps up with a section on the inside foot straight hamstring passing position and all the different ways in which you can reclaim inside space and render it useless.

The Torreando is easily one of the most popular passes in BJJ, Gi, and No-Gi. The pass is very powerful and works very well. At least it did, until now.

Gordon begins the dissection of the Toreando with the main question we ask ourselves as the person having to deal with it. As expected, lots of answers follow. The Toreando is basically the bridge between loose and tight passing, and Ryan treats it exactly like that, albeit from a guard retention perspective. Cool stuff like the scissor guard, side guard, etc features here, offering interesting options for the bottom player.

Another thing this portion other Gordon Ryan BJJ DVD excels with counters. As previously stated, there’s no need to just retain guard defensively when you can actually count and get the upper hand. Even the leg drag makes an appearance, as a natural companion to the Toreando.

I guess at this point it is redundant to point out that the volume starts off with the main question we ask ourselves when it comes to stack passing. The answers include pretty much everything, from early prevention like front-facing to breaking apart the dreaded locked hands. A very, very useful portion is the one covering shin pins, something not many people (if anyone) ahs covered before.

In terms of the body lock, the “They Shall Not Pass” DVD solves the “locking” part with extreme efficiency. Basically, the pass won’t work without the lock, so retaining it pretty much comes down to early and late defenses against the grips. My personal favorite is the very late recovery after the top player passes.

6. The Half Guard Retention Formula

Despite having an entire instructional out on the subject of half guard, Ryan still has a lot to add in this DVD. Most of the options Gordon offers here have to do with the butterfly hook and the knee Shield, similar to his previous instructional. Things really do come together in this one, though, with the focus more on retaining the guard than engaging offensively for the most part. Knee levers are once again a big part of t, and there are some really slick late escapes that wrap up this Part of the Gurdon Ryan BJJ DVD as well.

The usual in terms of a Gordon Ryan BJJ DVD. He rolls with 5 different people, including Placido (yeah, he is ok). In every roll, he uses all the concepts and tactics laid out before.

The same as in the previous volume, but with narration. Gordon is truly an expert at narrating rolls, as he really knows how to both bring focus to important details and still lift them into the big picture of sparring.

The “They Shall Not Pass” Gordon Ryan BJJ DVD is a really valuable learning resource. However, it will make the most sense to people that have really gotten into exploring the world of retention from more than just tone direction. That said, everyone will benefit from it, and it may even result in changing people’s minds as to the complexity and importance of the subject matter. Gordon’s DVDs tend to have that effect.

ON SALE HERE:
Gordon Ryan – They Shall Not Pass Part1