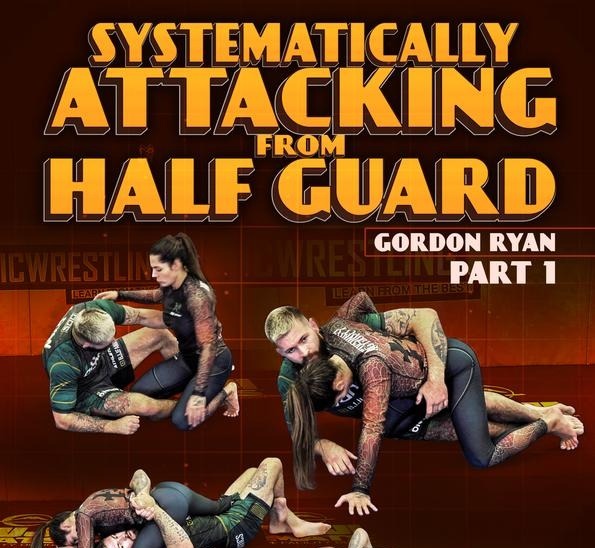 Gordon Ryan is always in the focus of the grappling community. He is either fighting, making waves on Instagram, or issuing awesome DVD instructionals. So far he has several incredible sets out, mainly exploring different guards, passing and attacking the turtle and the back. Now, there is a new member to his series with the brand new Systematically Attacking From Half Guard Gordon Ryan DVD Instructional. Of course, we have a very in-depth review of what you’ll find inside.

A new Gordon Ryan DVD Instructional is always an exciting thing to get your hands on. After all, the one constant is that you’ll get amazing material over at least 8 volumes. However, the structure of all his instructional changes constantly, in order to present the material in the way that is easiest for everyone to understand and absorb. The Systematically Attacking From Half Guard Gordon Ryan DVD is no different. It does address a position, though, that everyone likes to play and that everyone has many questions about at any given time.

At one point or another in BJJ, you will play half guard. It is too available and instinctive to skip over. Even with people that are brand new, the moment they’re under pressure and realize that someone being past their legs is not good, they’ll figure out a way to cling to one leg using both of theirs. In a nutshell, that is what the half guard position is in Brazilian Jiu-Jitsu.

The half guard was created by a Brazilian (Roberto Gordo) who had an injured leg in the old days and couldn’t play closed guard. So, he decided to play closed guard on just one leg and ended up with a brand new position. This position turned out to be everyone’s go-to guard and most people’s favorite. And there are several reasons for that.

The half guard will allow you to stay on the bottom and prevent guard passes without really having to think too much. It also offers lots of sweeping attacks and some submission options, again, without too much effort, and more importantly, with very little risk of losing the position or ending up the victim of a counter.

In the midst of hundreds of different half guard DVDs though, picking up a Gordon Ryan  DVD instructional on the subject of the half guard is a no-brainer, really. Of course, you get a No-Gi system, but that just means it will work perfectly in both Gi and No-Gi. That’s what Systematically Attacking From Half Guard can do for you.

Now that it is clear why everyone loves the half guard, let’s see Gordon’s take on it. We haven’t seen Gordon play lots of half guard, mostly because he is so dominant or top, and people disengage from most of his guards for the fear of leg locks. As is the case with the DDS, that does not mean that they don’t know how to play half guard.

The Systematically Attacking From Half Guard Gordon Ryan DVD Instructional clearly demonstrates this. Once again, Ryan goes about things in his original fashion, directing the half guard from the perspective of principles and ideas that are not common, to say the least. There are 8 volumes, each covering different aspects of the half guard position. There are, in fact, several different half guard variations in this instructional, and all of them are high percentage half guards you want to have in your arsenal.

Volume 1: Introduction To The Half Guard

The first volume of this Gordon Ryan DVD Instructional starts off with the usual introduction to the system. This instructional, however, is different from other Ryan ones, mostly in the fact that this one has a lot more chapters per volume than is usual for Ryan’s instructionals.

I usually always talk about the relation between Danaher’s and Ryan’s DVDs whenever they cover the same subject, like the back, or passing the guard. Well, in this DVD, Ryan does it himself, talking about the “John Danaher Paradox” at the beginning of his DVD. He then does a general overview of his half guard system, before using the butterfly half guard to start exploring some general principles.

Some of the main principles that will appear later on throughout this instructional cover inside space, head control, effective framing, the central shift dilemma, and a discussion about the underhook. Some basic transitions also future, covering things like going to the Sumi Gaeshi, Irimi Ashi Garami, Cross Ashi, etc. A portion on the power of the scoop grip wraps it all up.

Volume 2: Troubleshooting The Half Guard

Part two of Systematically Attacking From Half Guard is all about FAQs. Basically, it is a troubleshooting guide solving most of the questions you have on the half guard, and just as many you’ve never thought of.

The pinch headlock is first up, providing several attacking options from the bottom, in the shape of sweeps and leg lock entries. Following suit is the first of many troubleshooting subjects – what to do when an overhook Sumi Gaeshi fails. Ryan analyzes the problem and offers a solution that will give you an attacking alternative. Along the same lines, he covers failed arm drags, knee lever switches, kimuras, etc. Of course, the Half Guard Gordon Ryan DVD also offers solutions for each and every issue covered in this volume.

Starting from volume three, Gordon starts to cover some of the more unique principles that make his system tick. The principle of shifting the lower leg is a huge one in half guard, and Ryan covers it in extreme depth, starting with eh knee shield half guard position.

The first thing on this agenda is, understandably, the underhook game from the knee shield. He uses it to introduce the principle of the lower leg shift, covering the transition into it as well. From there on, he is free to explore sweeping as well as dealing with common counters like the Whizzer.

Some of the other subjects covered in this volume of the Gordon Ryan DVD Instructional are counters to the common backstep by using the lower leg shift, going back towards the headlock pinch and/or butterfly guard, attacking with submissions when opponent’s get underhooks of their own, and much more.

Another huge half guard principle is that of knee levers, which is exactly what Ryan covers in the fourth volume of his Systematically Attacking From Half Guard DVD. The introduction is through the one-on-one basic knee lever, covering the importance of this area of the half guard.

Immediately after the basics, Ryan covers getting out of bad spots, like for example, options off of a failed knee lever. He then goes into Kimuras from bottom half and how they relate to and differ from arm drags done from a knee shield, This sets him up to explore a sneaky knee lever entry when an opponent counters an arm drag with a Darce choke from the top.

Of course, there’s also an entry into Ashi Garami, this time on the far leg. One of the more interesting chapters in this entire Half Guard Gordon Ryan DVD is the one on stalling, and in particular, extreme stalling and how to solve situations in which people are trying to do nothing.

The deep half guard s another one of those half guard variations that people simply love to play. It is definitely a secure spot to hang out into, and attack from, especially for smaller or older grapplers. However, now Ryan sheds some light on the position that will make it attractive for everyone.

After introducing the mechanics of the p[osoition, Ryan connects it with the butterfly half guard via a very simple transition. He also covers several “what if” scenarios, covering situations when an opponent places one or the other knee on the mats There are also the opportunities such actions offer to the deep half guard player (of course, including lots of leg locks).

A few interesting chapters wrap this volume of the Gordon Ryan DVD Instructional up, looking into counters to the backstep, recovering from failed back attacks, sweeps, and some less known deep half guard entires.

The scoop grip features heavily again in conjunction with the scorpion half guard. Overwrap grips, locking the scorpion when the rear knee is on the ground, waiter sweep options, and several different dilemmas are all covered in this portion of the instructional. Several back takes and some pummeling thoughts and directions wrap up the technical parts of the Systematically Attacking From Half Guard Gordon Ryan DVD.

As you would expect from a Gordon Ryan DVD instructional, there are also plenty of narrated rolls allowing you to figure out what and how Gordon does when playing the half guard. To that extent, Ryan rolls with five different training partners and focuses on using all of the Half Guard stuff presented in the volumes above. In fact, he makes it a case to work the half guard for most of the time, precisely narrating what he is doing, and more importantly, what he is thinking.

The final volume of the DVD is another one filled with rolls, this time not restricted to the half guard. Once again, Ryan rolls with 5 different partners, narrating every aspect of what he is doing. While not Half Guard specific, he does go into the position during trolls, thus explaining how it all integrates into a full game plan.

Systematically Attacking From Half Guard Gordon Ryan DVD Instructional offers a lot of new insights into one of the most utilized and versatile positions in the entire sport of Brazilian Jiu-Jitsu.  Gordon’s take on int is the perfect blend of Danaher’s high-level instructions and Ryan’s own competitive and teaching experiences. IF you were looking for a way to easily and logically systematize half guard, this is the only instructional you’ll ever need!