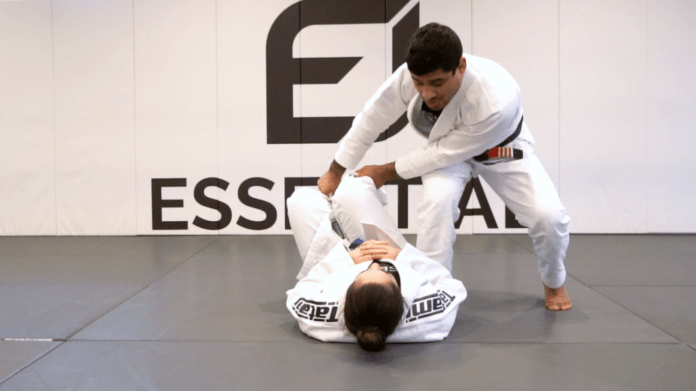 What is your favorite BJJ pass? Actually, scratch that. What is your most effective BJJ pass? Plenty of people will either state the Toreando pass as their most effective one or at least count it in their top 5 BJJ passes. It is a universally effective way of getting past the legs in Brazilian Jiu-Jitsu,  particularly against open guards.  But why exactly is this guard pass so powerful? There are plenty of reasons for it, and we’ll explore all of them in our quest to provide you with the ultimate guide to passing BJJ guards with the Toreando pass.

The Toreando pass is such an effective and simple Jiu-Jitsu technique that I actually love to start the kids in my gym with it. It is easy for them to comprehend and it will work perfectly for them in competitions. That just means that it happens to also be a pass I favor with adult students as well. I believe everyone should at least have it in their toolbox, regardless if it not your favorite way to pass the guard. It comes in extremely handy from time to time.

What Is The Toreando Pass?

Before I got into the Toreando pass, let me try and categorize passes a bit, so that you know what type of pass we’re looking at. First of all, you have passes against open guards only. You can’t really pass the closed guard unless you open the legs. That just means that every pass that works against open guards will work against the closed guard as well, as long as you open it first.

Secondly, you have directions and methods of passing. In terms of directions, you can pass under the legs, around them, through them, or over them. In terms of methods, you have loose passing, pressure passing, and submission passing. These have all been discussed here on BJJ World previously.

The Toreando pass is a technique that makes you pass the legs by going around them, and is a loose pass, even though it has a pressure component during the finishing stages. Basically, the pass looks like you’re grabbing both legs of an opponent and you’re brushing them to the side while placing a shoulder in their belly. There are, of course, plenty of little details that actually make it work, from grip placement, to which leg goes in which direction and body movement, etc. But more on that later.

History Of The Toreando Pass

While most people do not have the impression that the Toreando pass is one of the old-school passes of Jiu-Jitsu, it has actually been around since the very beginning. A variation of it exists in Judo, in the Ne-Waza portion of the sport. The pass really came to prominence during the 90s, when people started standing up to open the closed guard. Grabbing the legs came naturally and the Toreando guard pass emerged as the most logical and efficient option from there.

It was Fabio Gurgel who really put the spotlight on the pass. In the 1996 Brazilian Nationals, he fought Roberto “Roleta” Magalhaes, who had one of the most unorthodox and difficult to deal with guards in the world at the time. Gurgel managed to shut Roleta’s dangerous guard down and pass it with apparent ease using nothing but the Toreando pass.

Afterward, the Toreando became a pass everyone reverted to, especially against flexible and dexterous guard players.

How Does It Work?

The Toreando pass, as we already said, works by helping you go around the legs of an opponent. It doesn’t matter what guard they’re in, as the pass itself breaks any guard’s structure, opening up a direct route to side control, or sometimes, even the back.

Setting up the pass starts with the grips. You need to grip the Gi pants, just underneath the knees. There are different schools of thought here, but the “old-school” version of gripping on the inside of the knee makes the most sense. The goal of these grips is to be able to manipulate the legs completely, which holding halfway (at knee level) helps you accomplish.

For the pass itself, you need to use the grips to place the feet of the opponent to the ground. Keeping stiff arms will help massively with this task. When the feet are planted on the ground you can start going around the legs. However, the Toreando pass will only work if you keep the legs firmly in place with your grips.

A helpful and key moment of the pass is placing the far side shoulder on the opponent’s belly/chest, depending on size. In fact, this is your goal, and you should be in a pushup like position, with all your weight on the opponent’s legs from the moment you plant their feet. The aim is to pivot around your stiff arms to the side, until such a time you can place the shoulder in place. From there, establishing side control is fairly easy.

The Toreando pass is a very quick pass, which should be something you consider, You can’t do this like a pressure pass, going slow and steady. The “loose” nature of the pass means you use it to pass in a blitz.

The first detail you should pay attention to in a tornado pass is to have both your arms in the inside space (in regard to their legs) before you start setting up the pass. As an example, you can’t start the pass from a Spider guard. You’ll have to get your elbow loose and get inside position first.

A second key tip is to actually put pressure on the opponent the moment you get your grips by pushing their knees into their chest. This will draw out a much welcome reaction of leg extension, which will only aid your passing.

Realistically, instead of expecting to be able to plant the feet, old-school-style without the opponent getting up, pressuring their legs into their torso is a much better option. In other words, the moment you pressure the legs you start moving around, using the pushup position to keep your weight on your opponent. The moment you get a good angle, you simply punch with your far side arm, looking to extend only the near side leg of the opponent, rather than plant both feet.

The punch is what will get your shoulder in place, as well as help you control the position and prevent re-guard maneuvers which you can bet are coming. Securing the pass is the final detail, and it has to do with a hip rewind motion – you walk your knee under their knee forcing the hips to look away from you so you can secure side control.

As you might have noticed, we actually covered a couple of variations already – the old-school one with planting the feet and the more modern one with pressuring the knees into the chest. There are, however, several more variations and even follow up into other passes that stem from the Toreando pass. the mechanics of the pass are the same, most of the variations have to do with securing the pass, or staying upright instead of pushing the shoulder into the opponent.

One smooth variation is to forego the shoulder drop and instead go for a hip switch. This works perfectly well against people that are very quick with re-guarding and do a hip escape as you circle around their legs. The Toreando pass will work anyhow, but the hip switch means you’ll be able to secure the pass even against the most limber of opponents. The key point is not letting go of the grips.

The reverse knee on belly is another option not many people will expect. The Tornado pass actually places you in the perfect position to look for it. After a successful push and change of angle, if an opponent is difficult to break down or is moving away, you simply place the far side leg on their chest, into a reverse knee on belly position.

Last but definitely not least, you can use the Toreando pass to set up other passes, like the leg drag. Since that is a pressure pass, you simply use the Tornado to get there quickly, and you can then take your time passing. You can use the initial knees-to-chest position to go directly for a leg drag or use it from the hip rewind position after you secure the initial pass.

If the Tornado pass did not work without the Gi, as well as with the Gi it wouldn’t really be one of the best passes in BJJ, would it? In No-Gi, obviously, you don’t have the Gi pants to establish the all-important grips, so the main modification is there. The best grips without a Gi are on both ankles.

From there, you want to pressure the knees into the chest once again. However, You won’t have the chance of turning and then securing the leg until you get hip rewind. In No-Gi, the Toreando pass works much faster than with the Gi. That just means that once you pressure the knees in, you need to simultaneously pull the near side leg and pivot around.

Most importantly, instead of looking to pressure with your shoulder, you’ll be looking to get the near side arm around the waist, exposing the back directly. At worst, you’ll get side control. At best, you’ll be on their back.

The only way to make sure you’re actually effective with the Toreando pass is to do drills. There are plenty of ways to drill the pass, but the one main constant is that you need to drill a lot and do it often. Once you get the hang of it, though (and it is not that difficult) you’ll be unstoppable against any guard, Gi or No-Gi.