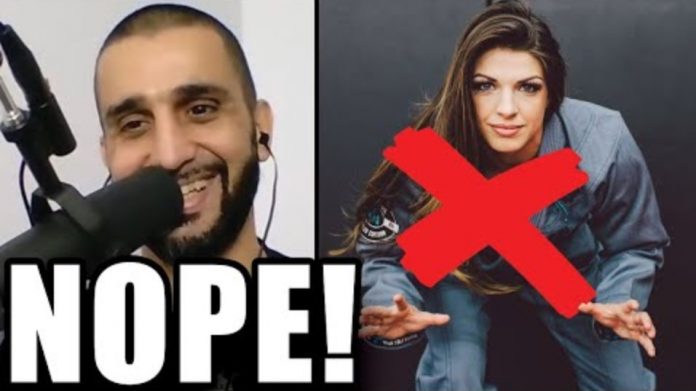 MMA coach Firas Zahabi gives his thoughts on rolling with girls. He doesn’t roll with females in wrestling or Jiu-Jitsu, Firas explains why:

“If you don’t want to grapple with females, how should I communicate this as a newbie? Hey, coach, listen, mo offense to anybody here, but I don’t roll with women. And for whatever reason, you don’t have to give a reason. I have my own personal reasons.

I personally as a trainer, as a coach, I never roll with my female students. One time I had a situation where I was sitting down on the mat and some girl walked up to me. She was from another school with a club and she asked me would you like to roll?
I said I’m sorry, I can’t roll with you.
She was like OH you gotta roll with women.
I said, no offense, but I don’t.
And she was like, you’re joking, right? And she got offended.
I said, no, I’m not joking. I’m sorry. I don’t mean to offend you, but I won’t roll with women. That’s my prerogative.
She asked me why and she tells me you know what? I just came from another gym, like she was asked to leave it cause she had an affair with the instructor. And now it turned the gym upside down. So I found it kind of weird because she was shocked that I won’t roll with her. Then she was offended.
I wouldn’t roll with her. I had to kind of apologies to her, which I don’t feel I should have to apologize. But I did apologize to her.
I said, look, I’m sorry. You know, I hope I don’t offend you, but I won’t roll with you.
Then she proceeds to tell me that her rolling with her other instructor ended up having a sexual relationship with Him. And I believe he was married or whatnot or he had another girl or something like that. I wasn’t interested too much in the story but there was a social conflict between them.

So she came to my gym and now she’s asking to roll with me. And I was like, Listen, I personally don’t do that.
I know some guys out there will be like, I know. I know. Some of you’re gonna be like, coach I roll with women all the time and I never have an issue and when I roll it’s strictly jiujitsu. It’s strictly jiujitsu and I never have impure thoughts.
Now, you are the holy you guys. You guys in that group of people are the holiest guys.
I look up to you and I see these men as angelic, they’re angelic. They’re so pure of thought that if they roll with a beautiful attractive girl, not the least bit of wrong thoughts inside them.

I can understand if you tell me because the girls are not attractive I have no sexual thoughts. And I would say look, that makes sense because that girl’s not attractive. But you have to understand I can’t go around saying hey, you’re ugly enough for me to roll with. No, you’re pretty enough. You’re too prettier. You wouldn’t do that. Right? You’d roll with them all. You’d say Look, I don’t roll with girls. It would be the equivalent of a girl saying look, I don’t roll with men.

You can check the rest of Firas’ thoughts in the video below.

VIDEO: She Married Her BJJ Instructor & Got Promoted at the Wedding

Mike Fowler Sexually Harassed a Female Student – He Explained Why