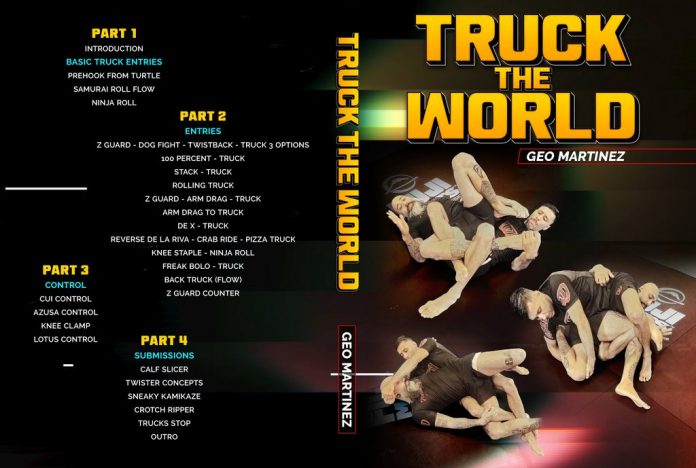 10th Planet Jiu-Jitsu is one of the more complex and intricate systems out there, and it is not just down to Eddie Bravo. He started it all, of course, but he has big-name students, the likes of Geo Martinez and his brother Ritchie, among others, that really do innovate tirelessly to expand and improve the system. Geo Martinez is definitely one of the most interesting characters in the entire sport of Jiu-Jitsu, and one of the best No-gi competitors ever, especially in lower weight classes. Among other unorthodox things, he is a real specialist in the signature 10th Planet position “The Truck”. Conversely, he now has a brand new BJJ DVD out, named “Truck The World”.

If you want to learn 10th pLanet Jiu-Jitsu, go to 10th PLanet. It sounds easy. However, their crazy (but highly effective and attractive) No-Gi system has grown so vast, that you now need to seek out a specialist in different areas of the system, if you’re looking to become one yourself. So, if the Truck position is your main area of study, you need to learn from the best in the business. That would be Geo Martinez, AKA the “Freakozoid”. And since not everyone can get to !0th Planet Freaks to train, his “Truck The World” DVD is definitely the next best thing!

Geo Martinez has one of the most interesting Jiu-JItsu stories ever. He was not involved in martial arts his whole life, nor has had a family member that rained and introduced him to the world of combat sports. On the contrary, he started off as a breakdancer and a great one at that. He came into contact with BJJ through breakdancing, when he came into  BJJ gym to give dance lessons and was offered Jiu-Jitsu lessons in return. It is sufficient to say that is all it took for geo to get hooked.

He already had a very unorthodox and unique style of dancing, one that helped him immensely in mastering Jiu-Jitsu. In fact, he managed to get his black belt from Eddie Bravo in only three years, a feat not repeated by many others. The multiple times EBI champion and ADCC US trials winner went into all-in when it comes to grappling and has been doing nothing but experimenting, evolving, and competing. A submission rate of 70% clearly demonstrates how talented Martinez isCurrently, he owns and teaches at 10th Planet Freaks in San Diego.

“Truck the World” is a DVD instructional that has been long-awaited among those that admire Geo’s work, I included.

The Truck position in BJJ is actually a modified wrestling ride. It is something of a checkpoint between side control or turtle and back mount, and as such, offers plenty of options. First of all, getting people stuck in the truck means you can control them easily, Moreover, you have a host of submissions available, mostly in the form of leg locks (calf slicers, heel hooks, ankle locks, hip locks, etc.). Finally, the position allows you to go to the back, but only after you go through another major 10th PLanet Jiu-JItsu checkpoint – the Twister.

The truck is basically when you get a lockdown type of control over one leg, for example from the turtle, but from the outside in. The goal is to lie on your back, place grips on the other leg, and make sure the hips are off the ground. This is the basic Truck position which will allow you to set up different transitions and submission holds. Everything you need to know about the position is in the “Truck The World” Geo Martinez BJJ DVD. 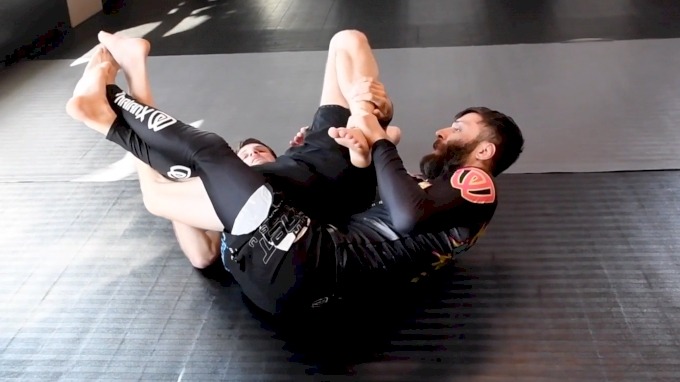 Geo is unorthodox in everything, so his BJJ DVD is also an unusual one. the only thing usual about it is the 4-part format that we have now accepted as mandatory for Brazilian Jiu-Jitsu DVD instructional. In terms of content, he really does take care of every aspect of the Truck, from basic mechanics to his weird and innovative entries to key control points, and of course, Geo’s favorite – submissions.

Entering the Truck involves a lot of rolling and spinning stuff, holding it involves lots of creative movement and subtle shift as well, making the position really dynamic, but also extremely powerful. “Truck The World” is the most comprehensive instructional on the subject so far, one that has all the information on the subject organized in the best possible way.

In the opening volume of the “Truck The World’ Geo Martinez BJJ DVD, you first get introduced to the truck position. Geo talks about its origins, how he got to know the position, as well as the years he has spent evolving it.

After the introduction, Marinez explains the position, but does so by covering some basic entries, mostly from the turtle position. When you see that the Samurai roll is considered a basic entry, you can rest assured the rest of this DVD is going to be highly entertaining. The NInja roll also makes an appearance, and both of them revolve around the prehook leg position which is probably the most important lesson from this opening volume.

The second part of the instructional is all about entries, and it is the longest of all four volumes. Geo Martinez does strat off easy, from the half guard, where he goes over dogfight entries, Speaking of guard entires, a closed guard entry via the 100% is also among the opening chapters of this second portion of the DVD.

All the fun starts a bit later on when geo starts talking about rolling entries, stacks, and arm drag combinations that open up the Truck. OF course, you can’t expect Geo to end there, and he introduces a new guard in the process, called the De X, which was a real revelation for me. Reverse De la Riva, staple pass, and Berimobolo entries follow, along with some uniquely named ways to get the truck, like the Piza truck and freak bolo, to name a couple.

An interesting back truck flow marks the halfway point of this instructional. 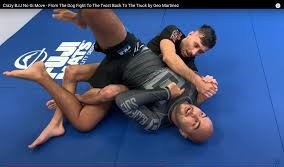 Controlling the truck position has to do with knee lines and hip positioning, similar to everything else in BJJ. the key thing t remember is to get a triangle wedge on the far leg in the truck, in order to kill off any chances of a counter heel hook. The second major thing you’ll learn in “truck the World” is not to let your opponent’s hips touch the ground because they can “flip” the truck on you.

Geo’s take on things is to sue different positions to enhance and change the aspect of control over the truck. These include Cui control, Azusa control, Lotus control (a personal favorite), and the knee clamp.

The cherry on top is the submission holds that you can hunt from the Truck position. Geo Martinez opens up with the calf slicer, a real classic when it comes to the Truck position. He goes on to cover some crazier versions quickly, though, like the Sneaky Kamikaze. The crotch ripper is also an option that’s always available, along with a route to the twister without actually leaving the Truck. You’ll have to see it to believe it, as it is one of the typical nutty Geo Martinez innovations that probably nobody else can think of.

The final chapter is all about the truck stop, before Geo wraps things up with a short outro.

A Geo Martinez instructional is always a good idea. Even if you don’t like the truck position per see, a Martinez BJJ DVD is both entertaining to watch and will teach you something about BJJ, without a doubt. “Truck the World” is one of the best instructionals I’ve seen in 2020,  and that’s saying something given the sheer number of DVDs that came out in this past year.