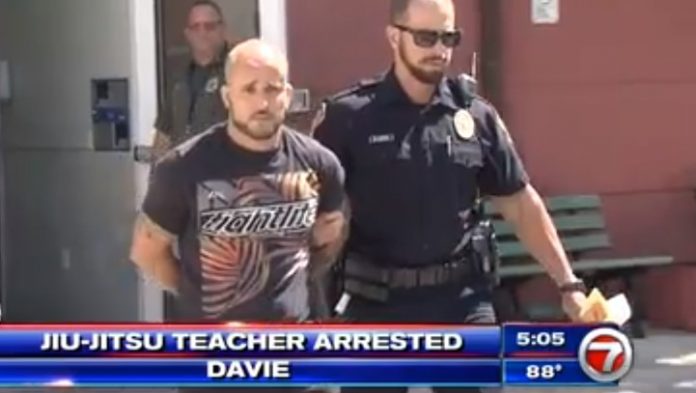 According to local10.com Davie, FLA Police have arrested a Brazilian Jiu-Jitsu Coach Jao Da Silva for inappropriately touching his students, teenagers training at his place.

Davie police Maj. Dale Engle said the suspect, Joao Da Silva is the owner and instructor of Raiva Brazilian Jiu-Jitsu school located at 8234 W. State Road 84. At the moment of arrest, his school appeared to be closed

In a video below we can see 7news cameras captured Joao Da Silva, 34-years-old BJJ Black belt being taken away with handcuffs on.

This all came to light at the end of June and it was unclear who notified police about Jao Da Silva. But now Police said it’s two teenager victims, ages 15 and 13. Joao Da Silva has been charged with lewd and lascivious molestation against them.

According to Police Detective Vivian Gallinal, both of the victims claim that their BJJ instructor and the suspect fondled their breast during Brazilian Jiu-Jitsu class.

“Two of the victims alleged that he inappropriately touched their breasts under their bra. Both victims have been attending the school for approximately three years.”

The victim told detectives this happened about three times a week for the past three years she was attending BJJ classes at Raiva Brazilian Jiu-Jitsu School.

According to Police report every time Da Silva touched young students breasts they were certain it wasn’t an accident nor it was for purposes of teaching a class. Victims also said that each incident happened after the class and not during a class where incidental touching could happen.

What’s even more interesting is that Da Silva was previously accused in a case involving 17-year-old-girl, but charges are still pending because Hollywood police are still investigating that case.

While police were taking Joao to the police cruiser he declined to comment on the allegations.