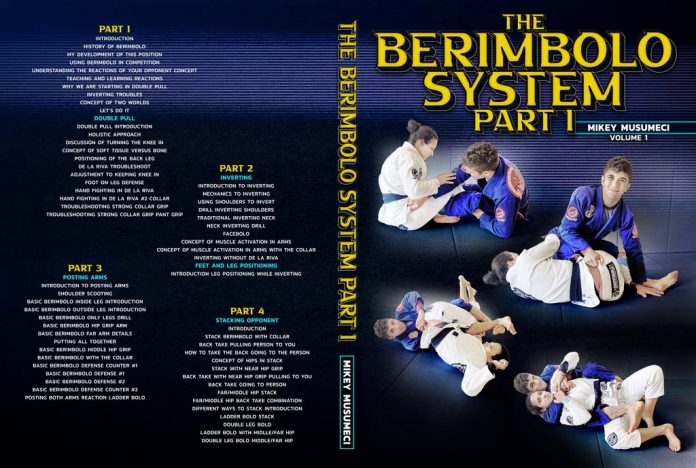 Mr. Mikey Musumeci is one we all enjoy watching grapple. The three times BJJ world champion is one of the best featherweights in the world and known as one of the deadliest guard players in Brazilian Jiu-Jitsu. He is not just fun to watch, but also a very good professor to learn from. In that sense, he already has several great DVD instructionals out, but his latest one, “The Berimbolo System”, has to be the best one he has issued so far and we have the complete Mikey Musumeci DVD review right here.

The Berimbolo is a move everyone has tried, there’s no denying that. Gi or No-Gi, at all belt levels, a perfectly executed Berimbolo is a thing to marvel at and respect. That said, some people simply fall in love with the move so much, that they build their entire game around it. So far, there have been instructionals to help explain the Berimobolo as a move, or even ways to defend it. However, up until Mikey, nobody has ever released an instructional as comprehensive as “The Berimbolo System”. As you’ll see from our detailed Mikey Musumeci DVD review, it is an 8 part instructional that really features everything there is about the Berimobolo and all associated techniques.

Mikey Musumeci is one of several highly esteemed lighter weight grapplers that are real wizards with the Berimbolo. The Mendes and Miyao brothers are also among the pioneers of the move and all innovation that came with it. However, Mikey is one that has been developing and evolving the Berimbolo for more than a decade now and has really made key breakthroughs. 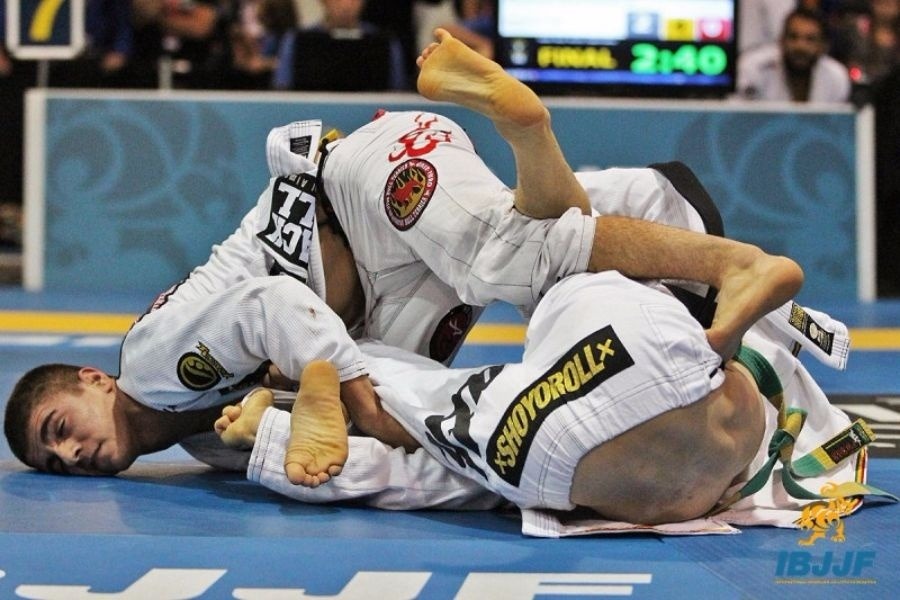 The man behind the name Berimbolo is Andre Galvao, who just so happens to also be associated with the Mends brothers who truly took the Berimbolo and made it their own. The Berimobolo is a move that stems from the De la Riva guard and involves inverting and spinning to get to an opponent’s back or sweep them. The first man to do it was Samuel Braga, and the move just never faded always since then with plenty of the lighter weight grapplers building entire games around it. Musumeci is one of those grapplers and has really created a complete grappling system around the Berimbolo. His “The Berimbolo system” instructional is the first one to show the complete evolution of this move and leave plenty of doors open for further experimentation. Enjoy the comprehensive Mikey Musumeci DVD review of the “The Berimbolo System” instructional.

What can you expect to learn from the “The Berimbolo System” DVD? Well, the Berimbolo, of course. However, the mere fact that this is an 8-part instructional as opposed to the usual 4-part format means Mikey has a lot more to say about the Berimbolo, and plenty of associated subjects, than most of us, thought possible.

Mikey really covers everything there is about the Berimbolo and does it in the most high-level way possible. Starting with different ways of pulling someone into you for a Berimbolo, he goes on to cover inverting techniques and shortcuts, discusses how and where to post your arms, and even goes in stacking entries to the Berimbolo. But that, as you’ll see from the detailed Mikey Musumeci DVD review is merely half of what you get. Musumeci also talks at length about back takes, chaining attacks together, the top positions bolo, and an innovative aspect he dubs “the back hip”.

While most folks usually start with an introduction to whatever a DVD subject matter is, Musumeci goes further than that, talking a lot about the history of the Berimbolo as well. he goes into his own history of using the move as well, further explaining his development and contributions in that area of BJJ. He also covers several key aspects like reading your opponent’s reactions, inverting issues, and the concept of two worlds, before moving on to the double pull.

The double pull position is something that is present throughout this Mikey Musumeci DVD review. It is the launching pad for most of Musumeci’s Berimbolos, something he explains further along. At the moment, he really does cover things not many people have thought of, the likes of soft tissue vs. bone, turning the knee in, back leg positioning, etc. He even covers troubleshooting advice from the De la Riva. The first volume wraps up with key chapters that explain how to hand fight for a Berimbolo from the De la Riva guard.

This is arguably one of the key volumes of “The Berimbolo System” Mikey Musumeci DVD. Inverting is a crucial part of any Berimbolo, and Mikey is a wizard at explaining every single step of it. It all starts with the mechanics of seamless inverting, mostly in terms of how to use the shoulders. plenty of interesting drills follow suit, making inverting really easy. The chapter I particularly enjoyed during this Mikey Musumeci DVD review was the one on the “traditional” inversions using the neck, and why they are ineffective and potentially dangerous.

But that’s not the craziest part! Mikey’s completely nutty “Facebolo” makes an appearance here, and it is something you’ll have to see to believe. It is not just a joke, though, and opens up the subjects of muscle activation of the arms and inverting without grips, that follow suit.

The first time I tried the Berimbolo was after I had already spent months messing around with the Tornado guard. In that sense, inverting was no issue for me, but using the grips to help with the Berimbolo was something I struggled with. If only something like “The Berimbolo System” was available back then. The subject matter of where to place your arms, how, and most importantly, why is key to mastering the Berimbolo. Mikey Musumeci dedicates an entire volume of his instructional to solving this particular issue.

From shoulder scooting, through inside and outside leg Berimbolos, all the way to plenty of drills that’ll have you use one arm, two arms, or no arms, Mikey systematically explains how and where to place your grips or posts to move around unimpeded. An infesting aspect is that in this particular volume, Mikey also covers some Berimbolo counters and defenses, which, as it seems, have everything to do with grips and their placement.

How can you get Berimbolos off of stacking your opponents? Mikey Musumeci’s take is easy – control the hips, and you’ll be able to Bolo anywhere you want. Once aging, grips play the biggest role, along with posting the arms and using some of those inversion drills explained previously in this Mikey Musumeci DVD review.

The point of the stack is to open up the back anyway, and introducing a Berimoblo to the mix simply means you increase your chances to get there. Mikey offers different stack options in the form of a middle and far hip stack, the ladder bolo stack, and plenty of other innovative ways to combine stacking with Berimbolos. 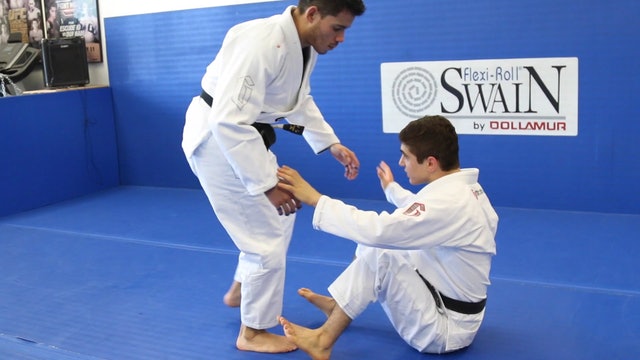 What happens after you successfully Berimbolo? You need to take the back, or at least, secure a sweep. If you followed the material from the previous volumes of “The Berimbolo System” Mikey Musumeci DVD, you can definitely complete a perfect Bolo and end up behind Now, it is time to figure out how to pull the opponent towards you and secure back control.

The chapters include pulling the hips, the shoulders, and using collar grips to get people out of balance. The key chapter has to be the one on combining grips together, along with the chapter that covers climbing.

The part of this Mikey Musumeci DVD review that everyone was waiting for – attacks. Despite every move of the Berimbolo, from grips to completion being an offensive one, there are still more attacks to include.

In this volume, Musumeci starts combining things together. Pulls with stacks, twister hooks, ladder bolos, and double leg bolo options that open up back attacks, sweeps, or even direct submission holds. Most of the volume is centered around the use of the twister hook, which is literally the glue that holds all Bolo attacks together. You’ll simply learn how to see it everywhere and use it as a door to access the Berimbolo System Mikey has created.

I have to admit that this volume was the most interesting one to watch during this Mikey Musumeci DVD review of “The Berimbolo System”. Why? Because it covers something new. That is the concept of “uninverting”. It is something Mikey has developed in his Berimbolo system that really helps you complete a Berimbolo, by utilizing a very powerful base to start attacking from.

The final volume of The Berimbolo System Mikey Musumeci DVD is about getting the Bolo from top positions. It is the most attractive way of hunting for Berimbolos, and definitely, one of the Bolo uses that opponents least expect. In that sense, Musumeci uses Bolos to threaten opponents and get passes, or even submissions like the arm-triangle choke. Back takes off of top position Berimbolos are also here, as is the body lock pass, rolling to get back control, and the double leg Bolo.

Another key moment of this final volume is the final chapter on putting everything together. here. Mikey doesn’t only cover the technical aspects of it, but also how to think about chaining things together, and set traps for your opponents.

All in all, if you want to learn a Berimbolo, you need to learn from Mikey. He might not be the one who named it, the one who first used it in a tournament or the one who made it famous. He is the one, though, that has taken the Berimbolo system to a whole new level, ages ahead of what everyone else is doing. His world titles and victories over the biggest names in the sport further testify to that. If you don’t get “The Berimbolo System” after reading this Mikey Musumeci DVD review you’ll be shooting yourself in the foot in terms of BJJ progress, even if you don’t really enjoy doing the Bolo.