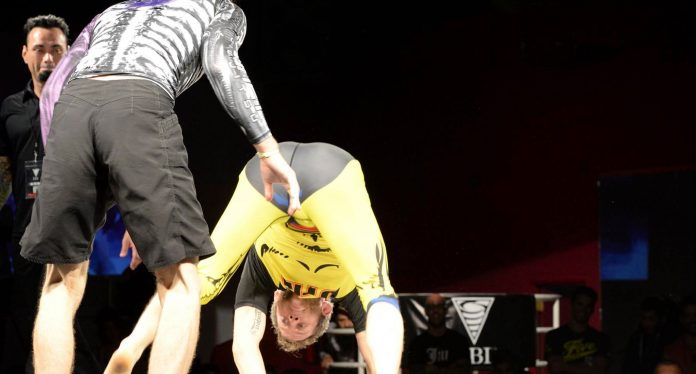 What are the weirdest guards you’ve ever played in BJJ? In all honesty, when you take an outsider’s look at things, all guard positions must seem weird. However, some are just plain ridiculous, like the Donkey Guard, for example. When Jeff Glover premiered it at Metmarois IV, I was just as taken aback as the rest of the BJJ community. We saw a few people try to emulate the guard afterward, and incidents and controversy made suer this guard became a part of Jiu-Jitsu history. That said, are you using it at all, even sporadically, or have you completely forgotten about it?

If there was ever a martial art where you can actually pull off crazy and impossible looking things in a high-level sports match or even a fight than it has to be Brazilian Jiu-Jitsu. From flying submissions to intricate ways of putting people to sleep with their own clothes, the gentle Art has really given every crazy thought a platform to actually materialize. However, I do believe that the Donkey Guard, created and pioneered by Jeff Glover, is one of the craziest things to ever come out of the BJJ world. That said, it is still a valid guard (according to me) and can come in very useful, particularly in a grappling-only competition setting.

The Origins Of The Donkey Guard

The history of the Donkey guard is a funny one, given that the position had a  goal to get a rouse out of a crowd. Jeff Glover, the man behind it has always been an entertaining and highly unorthodox grappler. He is known for innovating with positions and unexpected movements every time he was competing. It didn’t matter whether he fought a world champion, or a newly promoted black belt, Jeff would do crazy things that earned him a reputation for one of the most entertaining and exciting grapplers to watch.

Back in the “dark days” of professional Jiu-Jitsu, Metamoris was the only platform where people got paid to grapple. In one of the early editions (number four, to be precise) Glover met Baret Yosida in a 20 minute, submission only match in No-Gi. Right from the get-go, Glover turned his back to Yoshida (a major no-no in BJJ and combat sports) surprising everyone. He managed to invert somehow when Yoshida engaged, and almost got a heel hook from it. The crowd went wild and the Donkey guard was born. After the match, Jeff said that he did it to get a rouse out of the crowd more than for any tactical reasons.

The idea for the move is from something that back then was a true taboo, and today is just one more aspect of the leg locking game – the Kani Basami Judo takedown, AKA the scissor throw. The Kani Basami, as legit as it is, is “outlawed” in both Judo and Brazilian Jiu-Jitsu (under most resets) so Jeff decided to create a Kani Basami-inverted guard hybrid in a legal, unusual, and highly entertaining way. It suffices to say, the position caught on fairly quickly, although it completely divided the BJJ community. It is one of those things you either love to do or hate from the bottom of your soul. Some hate it so much, in fact, that it even got banned under certain resets.

So, what exactly is the infamous Donkey Guard? Well, simply put, there’s no simple way of explaining it. It is kind of an inverted closed guard that you do from a handstand or a headstand. Something along those lines. Let’s see how Glover does in as much of a step-by-step fashion as it is possible.

Glover has two ways of getting to the Donkey Guard. Actually, he has two ways of luring people in there because he doesn’t’ really offensively enter the position in any of his displays so far. Basically, his first-ever use of the guard was from standing,. When he turned his back to Yoshida. He did not just look always though, keeping an eye on Yoshida, as well as an arm out. The arm works just like when you’re wrestling – it gauges distance and helps with timing. From there Glover went directly to a rolling heel hook when Yoshida jumped but the more “basic” version is to try and place your hands on the ground, and look to get your legs around the opponent’s waist, in closed guard style.

Jeff also demonstrated a different way to get to the Donkey guard in that very same Metamoris match. While seated, he inverted into a handstand, keeping his legs open and pointed to his opponent, in what can only be described as a weird fashion. From there he either aims to get to the closed guard version or simply uses the legs to entangle and transition into a 50/50 or Ashi Garami position.

Options from this crazy position include sweeps, for the most part, especially when the legs are closed. For those more creative and adventurous, there are also back takes, spinning and rolling attacks of all kinds, as well as the mandatory leg lock entries.

Is it Worth Playing?

The biggest question that comes with the Donkey Guard is whether or not it is just a Jeff Glover thing, or it can be something useful when it comes to BJJ. Let’s be honest from the get-go – forget about it in a self-defense manner. In a grappling tournament though, it is really a useful option, if you have the athletic requirements to get to the position and play it.

For me, the Donkey Guard is not the first guard I use, nor one I’d use all the time. It does come in handy to surprise people though, especially those overly serious. In rolls, it guarantees fun times, as long as you do not place any unusual expectations on it. That said, most of the folks that hate on it probably take things too seriously anyway. Unusual positions are what BJJ is all about and the Donkey Guard should, given that it is safe, should be something available to everyone to use.

On that subject, I have to address the Gracie tournament ban here. Soon after it emerged, people started messing around with the Donkey Guard in tournaments, which brought about lots of controversy. In one match between a purple and brown belt, the brown belt got a DQ because he got sick of the purple belt turning their back and looking for the Donkey Guard and kicked his opponent. All Gracie tournaments declared the position banned, under the “realism” rules which state the guard would never work in a real situation. This is opening a can of worms which would show that a solid 80 percent of sports BJJ positions and moves won’t work in real life altercation. That’s why it is called sports Jiu-Jitsu. It is also why I think preventing people from doing unusual stuff is actually detrimental to BJJ, rather than helpful.

The Donkey Guard is something you should at least try if you train BJJ. There’s no good reason not to try positions like this, even if it doesn’t work out for you at the moment. It won’t change your game or anything, it will just open a door to a different way of thinking, which I think is the biggest lesson we can learn from the Donkey guard. Why stay “stuck” in the traditional when BJJ still has so many unexplored areas?