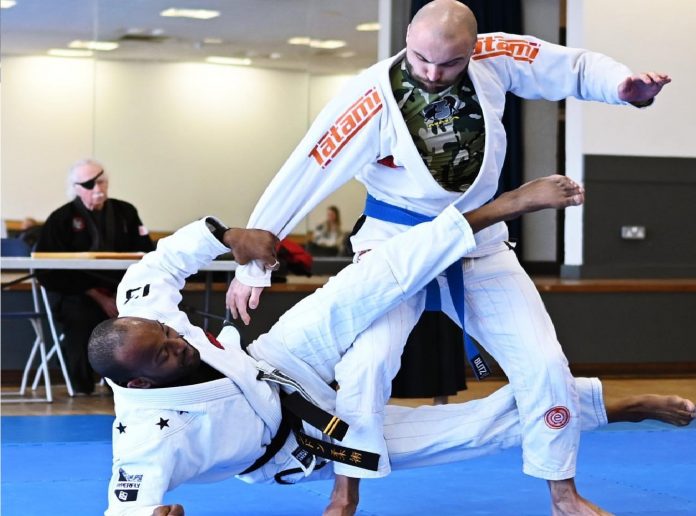 There are techniques upon techniques you can use for any occasion in Brazilian Jiu-Jitsu. Whether you’re fighting on the bottom, top or standing, you have plenty of options to choose from. Well, not quite. When you’re practicing BJJ, or Judo, or any other grappling martial art as a sport, you’re also bound by rules. Sometimes, these rules can be really limiting and frustrating. On other occasions, they’re actually there to protect us. However, they do seem to take a lot of the fun out of competing. I’m not even going o touch on the subject of leg locks and the rulesets banning or allowing them. However, there’s one technique that should get its time under the sun – the scissor takedown, or Kani Basami, as it is known in Judo.

Kani Basami is a move that every Judoka knows, but only a few can perform. IN fact, it was Judo that first outlawed the throw in competition. However, Judo is now infamous for throwing out lots of its techniques in order to satisfy Olympic standards. So much so, in fact, that the spirit of the art has been severely damaged. That aside, the Scissor takedowns is certainly not the safest thing you can perform. However, it is most definitely efficient and doesn’t have a steep learning curve, making it picture-perfect for BJJ. However, just like in Judo, BJJ has outlawed this takedown as well, at least when it comes to Gi tournaments. But is it really so dangerous to perform?

The Kani Basami is one of the ancient throwing techniques of Judo. The way this throw, or better, said, takedown works, is by attacking the legs of the opponent. This is exactly what lands it in the Kinshi Waza, or forbidden techniques of Judo. The reasoning is that you can cause massive damage to the knees of the opponent, or cause a traumatic brain injury due to a bad fall backward. Both, however, are quite questionable reasons for completely shunning this efficient and fast takedown.

The reason that Kani Basami is also known as the scissor takedown, or even the “flying scissors” is because of the motion of your legs. For this takedown, you actually attack the opponent’s legs with your legs. IN fact, the goal is to use a scissoring motion of your legs to take away the opponent’s base and get them to the ground quickly. And it works. The way Judokas usually set this takedown up is by isolating an arm. The further you can extend an arm away from the opponent’s body, the better. To execute the takedown you need to face the side of your opponent as well, rather than stan in front of them. The goal is to swing one leg in front of the opponent’s waist, and place the other behind their knees./ obviously, this is done while jumping, hence the “Flying” nickname.

In Judo, where you can place tight grips on your opponent’s Gi, this takedown is pretty much a guaranteed success. The grips usually go on the opponent’s sleeve and on the back of the collar.

Once again, the angle makes all the difference here, as you have to be sideways to your opponent. The move was actually a mainstay of both Japanese Ju-Jitsu and Judo, until 1980.

The Revival of the Scissor Takedown

Given that Judo already banned the scissor takedown, BJJ simply transferred the ban to Gi competition rules. The IBJJF rules have long been a source of debate in the Jiu-Jitsu community of today. In fact, they pretty much split the grappling world. There is merit to each side, and some valid points to consider. But that’s a subject for another article. What you need to know for now is that a clear reason why the Kani Basami is forbidden in BJJ is because of the knee reap rule.

However, with the re-shaping of the BJJ competition scene in the last few years, the scissor takedown got some attention. The rise and spread of No-Gi tournaments with submission only focus made all moves legal. In fact, just like the ADCC, only grapplers do not have to wait a couple of years in between competitions. That said, it turns out that the forbidden techniques of Brazilian Jiu-Jitsu are tailor-made for each other. For example, the scissor takedown connects perfectly to the inverted heel hook, a fellow forbidden technique. This re-emergence of this ancient technique raises the question of whether or not it can be safe to practice an execute?

To be completely honest, the modern-day leg lock entry via the flying scissors is not quite the same as the original Kani Basami. In terms of setting up leg locks, the idea is to focus more on the near side leg rather than both legs. The end goal is getting to the Inside Snekaku AKA Honeyhole position. As it happens, the position itself is legal under all rulesets. However, in NO-Gi circuits, the highly reliable inside heel hook is the go-to move form the spot. And the Kani Basami modification is the perfect way of getting there without much fuss or effort.

Remember when I said that he Kani Basami was not outlawed until 1980? Well, the reason behind it can be found at the All Japan Judo Championship of that year. Durign a scissor takedown, one competitor ended up with fractures on both legs. The injury became the focus of Japanese media and it ended up being a big deal. Of course, there was an immediate reaction and the Knai Basami got a forbidden status. Since then, the International Judo Federation hasn’t reconsidered.

The No-Gi take on the scissor takedown that Jiu-Jitsu grapplers use nowadays is not that far from the original version. The only trouble is that it still comes with a certain risk. IN fact, takedowns are statistically the most dangerous part of grappling training. Whether it is a double leg, hip throw or a scissor takedown, the risk is there. Ironically, it may actually be the takedown that leads to one o the most demonized moves in Jiu-Jitsu – the heel hook that is the more dangerous move. However, there are still ways of practicing and executing Kani Basami safely.

The reason this takedown is so dangerous is that it is very quick. The surprise factor is what may snap a knee or land the opponent forcefully on the ground. However, the modern modification of the takedown is that you focus first and foremost on the near leg. This takes away lots of the juping, as it is more of a “guard pull” move than a takedown per se. Furthermore, instead of looking for an explicit scissor movement, you’re actually looking to entangle the leg, which makes it a lot safer to execute. Finally, if you introduce the Gi the move suddenly gets a great anchor and the risk decreases even more significantly.

Whatever your take is on “dangerous” moves, you can’t dispute the fact that most of the work. While I am a big proponent of allowing everything, at least in training and certain rolls, I also believe in restrictions. First of all, the scissor takedown is clearly an advanced move that I think, people shouldn’t even touch before the purple belt. Moreover, I think that training Kani Basami should be trained under strict supervision, and with a willing and cooperative training partner. Even better, if you can learn it form a Judoka, do so. You see, in most Judo schools, even though they can’t use them, people still practice the forbidden moves. We still have a lot to learn in BJJ, as it seems.