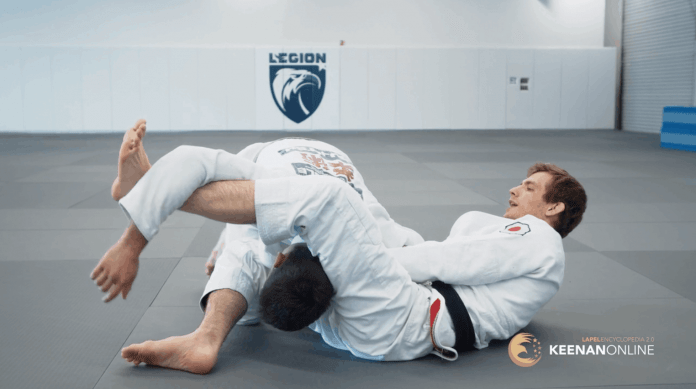 BJJ GI chokes are usually seen as exclusive to Brazilian Jiu-Jitsu. While no other martial art has more Gi-mediated chokes than BJJ, not all of them have to do with Jiu-Jitsu. In fact, Judo si responsible for some of the tightest Gi chokes around and has been utilizing them for decades before BJJ even came along. So, while looking for an effective Gi choke, that’s highly effective, but not overly utilized and known in BJJ, I came across the Canto Choke. It is unusual, brutally tight, and completely unexpected. Plus, anyone can get the hang of it really fast, so it is definitely more than worth exploring.

The Canto Choke is one of those moves that leave opponents scratching their heads. It is also one of the moves that they think we’re just down to luck, and they’ll never get caught in it again. Well, this choke certainly goes against the grain, and you can set it up even if the opponent knows it is coming. As usual, it is down to the details and some intricate positioning, but once you’ve got them, there’ll be no stopping it. Plus it is not one of the BJJ gi chokes people actually know how to defend, which means you can really build a great submission game around the Canto choke.

Well, it is not a trick, strictly speaking. BJJ GI chokes are very powerful weapons, and most of their power is down to one thing – versatility. With Gi chokes, regardless of what part of the Gi you’re using to choke, there’s always room to adjust without having to let go of a submission. Compared to moves like the rear-naked choke, guillotine, or D’arce, to name just a few, this provides a lot more security. Not to mention they’re easy to hold on to and will work on opponents of all sizes by just gripping a bit deeper or more shallow.

There’s also a sneaky aspect to chokes with BJJ Gi. If you are really subtle about it, people will never notice them coming. The reason for this is that we’re holding the Gi at all times anyway, so grips do not usually raise suspicion unless they’re in a very specific spot. For example, everyone will know what’s coming if you’ve got a deep grip on a collar while in the back mount. However, if you just hold not a collar from the bottom, people do not perceive it as a threat. That’s why loop chokes work so well in BJJ.

The Canto choke is one of those Gi chokes that are very easy to set up. That said, you have options to make it as simple or as complicated as you want. The fac tit offers so many variations that just make it better. Furthermore, you can combine it with other Gi chokes by doing only minor grip adjustments. Versatility + sneakiness, that is a recipe for a tap in any grappling martial art.

A Trip Into History: The Ashi Jime

Historically speaking, the Canto choke bears the name of Flavio Canto, an Olympic bronze medalist in Judo. The Brazilian got his medal at the 2004 Summer Olympic Games in Athens. Although representing Brazil, Canto was born in England and started training as a teenager, which is quite late in Judo. Still, he managed to excel and made the Brazil Olympic Team.

During his years of training, Canto became known for really taking an old Judo choke to the next level. This is the Ashi Jime, or leg strangle. The move itself has been in Judo for years, but Canto did some much-needed adjustments, evolving the choke to a very formidable weapon for Judo. Of course, it didn’t take long for the Canto choke to make the jump to BJJ, particularly given Flavio’s nationality. Now it is one of the sneakiest BJJ Gi cheeks you can use.

The Flavio Canto choke works pretty easily. To set it up, all you need is to be in the closed guard – at least for the basic version. The first step is getting the same side grip on the opponent’s lapel. Just grabbing won’t’ be enough though, so you need to make a point to really break the posture. Next, you open the guard and rotate as if you were going to do an armbar. The rotation is done with your head going to the side opposite of the collar grip. Holding a triceps grip o the other hand is the original Canto choke version.

Once you’re at an angle of 90 degrees in relation to your opponent all you need to do is swing one leg over the head. Once again, it is the same motion and leg position as doing an armbar. The only difference is there’s no arm to attack, and you have a grip on the collar instead. The leg you swing over the head needs to be positioned with the back of your knee right behind the head of the opponent.  pointing the toes towards the ground while pulling with the arm that has a collar grip will get you an easy and quick tap.

In judo, they usually use this choke from standing, as a sort of a guard pull. While guard pulling is not allowed in judo, dropping directly into a choke is, which is exactly what people do. Moreover, it opens up the option to sweep their opponent and end up on top. That way, they win the match even if they don’t get a tap. In practice, though, in more than 90% of cases, people tap.

A Few BJJ Variations To The Flavio Canto Choke

Speaking of Judo setups, you can actually pull guard straight into the Canto choke in BJJ. Instead of placing the leg on the hip, though, you place it on the opponent’s inside thigh. Once you’re down, this will draw them in so that you can hook the leg and go into a Canto choke finish from a half guard.

In terms of half guard finishes, there’s a really cool variation by the man that excels at BJJ gi chokes – Keenan Cornelius. Apart from setting it up from half guard, Keenan likes to make sure the opponent has nowhere to go. I that sense, he uses the leg that goes over the opponent’s head to trap the far arm or even the far leg. Cornelius actually introduces the other leg as deep as possible too, almost going in o closed guard-like position while choking. This version of the choke is definitely inescapable and will get taps from even seasoned black belts if you can get there.

You could even set up the Canto choke from side control. It is the way I learned it first. All you need to do si have a solid grip on the opponent’s collar, deep towards the neck, on the same side as you are.  A swing of the leg over their head and dropping your knee down will do the rest. Conversely, you can go for a grip of their lapel instead of the collar as well, making the choke even tighter.

BJJ GI chokes are fun to set up. They’re even more fun if you can tap a lot of people with them, and nobody sees them coming. The Flavio Canto choke is one such sneaky option that will provide you with some great submission victories if you time it right. Have fun with it!

Tarikoplata – The Shoulder Lock Nobody Can Defend