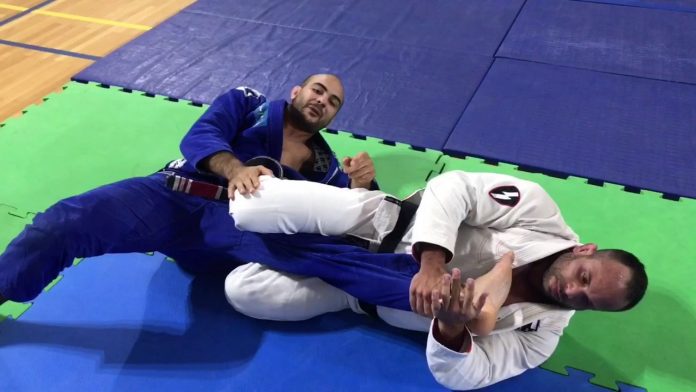 I love kneebars! In fact, I think the only people who don’t are the ones who have never tried to do one. If you train BJJ long enough, though, you’ll eventually be exposed to the beautiful submission that is the BJJ kneebar. That said, my stance on training them is clear – the earlier you start, the better you’ll be with them when you “unlock” their use as a brown belt. So, invest in the leg, learn kneebars, and learn how you can get to the kneebar from different positions in as many unusual and unexpected ways as you can.

The kneebar is a very powerful submission. In fact, out of all the leg locks, I’d say it is the most powerful, bar heel hooks. It definitely provides you with the most control over an opponent, not to mention an entire limb. Plus, it is painful and there’s no denying it, no matter how tough an opponent is. As long as it is perfectly set up and executed, of course, Speaking of setups, the success of any submission depends as much on the entry as it does on the breaking mechanics itself. For that purpose, I’ll share some crazier BJJ kneebar entries below, in order to provide you with a bit of variety for your leg locks. You’re welcome.

How does a BJJ kneebar work? Pretty much the same as a BJJ armbar, and you’ve surely done lots of those so far. The idea is that you place your body in front of a joint, using its entire structure to make that joint bend in a direction it is not intended to. The end result would be a catastrophic break of that joint. In this case, it is the knee.  Note that a cleanly executed kneebar is a very dangerous submission and can cripple someone for life. As such, it may be a perfect tool for a self-defense scenario, but in competition, and particularly in training, be careful with it.

Moreover, given the nature of the submission and entries into it, always watch out for your falling bodyweight and how it may affect the knee of the opponent/ training partner.

Under IBJJF rules, in order for you to do a BJJ kneebar, you need to be at east a brown belt. Even then, you have certain configurations you can use, as knee raps are not allowed at any level. That said, the kneebar will help you get a lot of taps, whether you’re grappling with or without a Gi.

Position-wise, you can get a kneebar from just about everywhere. That includes both top and bottom positions. Most often, people hunt kneebars for a top half guard position, or from the X-guard when on the bottom. However, there are plenty more setups than just these, as you’ll discover today.

The key aspect of a kneebar’s success is control. The position itself is a controlling one, so there’s no need to talk Ashi Garami here. For a kneebar, you need to have your hips as close as possible to the hips of an opponent. At the same time, you need to be facing the front of their leg. The hip position makes all the difference, just like with an armbar.

The knee should be positioned somewhere at chest level, but that obviously differs depending on both you and your opponent. Your arms need to go around the leg, controlling at knee level during tan entry into a BJJ kneebar. Even after you get into position, holding at this level will provide you with a lot of control over a limb, and therefore, the opponent. However, for a finish, you’ll need to extend the leg completely, which means transferring your grip down to the ankle of an opponent. A Rear Naked Choke grip, with the foot trapped on your shoulder, is the ultimate end position you’re aiming for.

For a BJJ kneebar finish, you need to extend your hips into the thigh of an opponent while holding on to the ankle of the leg with your arms and head in order to cause the knee to bend, and ultimately break. The goal, of course, is to get a tap before this happens.

A few pointers when it comes to finishing. Pushing straight with your hips is a must, However, twisting your body upwards as you pull with the arms adds a whole new dimension of pain and pressure to the submission. Squeezing your knees together, and looking to extend them will also pile more pressure onto an already super-tight submission hold.

Now that we revised the mechanics of the kneebar, let’s talk entries. Getting a kneebar does not have to be a methodical and slow thing. Kneebars are there for the taking with bold, explosive, and highly impressive moves as well. You can set a BJJ kneebar up by spinning, rolling, Granbying, setting traps, or even dancing around. Here are a few options I like to use to keep my opponents guessing how I’ll get to the kneebar they know is inevitably coming.

The bottom half guard is a great spot for setting up a trap to get a kneebar.  The Z-guard is tailor-made for this. Use the bottom arm to catch the leg (anchor point) and slide the knee shield across so that the knee reaches the opposite side armpit. The other arm also goes with the palm to the armpit to allow the knee to sneak through. The knee shield creates enough space for you to reach for the foot in order to extend the leg for the kneebar.

The goal is to pull while rolling to your back. This will open up space for you to thread the inside in first, and secure it with the knee shield leg on top of it. Keep turning to the side and you end up in a perfect kneebar position.

The shin-on-shin guard is also great for setting up surprise kneebars. You just have to be careful not to pull an opponent directly into a knee slice pass. Make sure your hooks are active at all times to prevent this. Otherwise, simply go to your back, pulling as if you would for an Ashi Garami (single leg- X) entry. Once you elevate the opponent as high as possible, angle them to the side of the leg you’re holding. This will cause them to put all weight on that leg, leaving the other open for attacks.

The entry is via half-Granbying into a position which is made possible by the all-important grip on the opponent’s toes (like for a toe hold) of the leg that you’ve forced them to place on the ground. Getting a BJJ kneebar from there is a breeze. In fact, the finish is with the ankle under the armpit, which is far more powerful than the regular version.

As cool as it sounds, this is a “dancing” way to enter into a BJJ kneebar. It works from the top, against a butterfly guard. The trick is to be the first one to grip. In fact, you want to go for the ankles and lift both legs as high as possible. This will get your opponent to their back, albeit only temporarily. The moment their leg is at about a 90-degree angle to the floor, you go for your entry.

What you do is simply step to one side, and throw a leg over, looking to land deep into a kneebar position from the top. This is the crucial moment of getting your hips high enough on their hip, so make sure you make it count. Inertia will take care of the rest, while you get a tap after dancing yourself into a kneebar.

The rolling kneebar is a staple of Sambo and something we see more often in BJJ as well. You can hit it from plenty of standing positions, but having an overhook to begin with would be ideal. Think about going for an Uchi Mata, while holding the opposite side arm. The trick is that you won’t be looking to send the opponent flying, but rather roll under.

Your lead leg will act as an anchor, hooking behind the knee of the far side leg. This will allow you to jump your other leg behind the leg you’re attacking, forcing the opponent to roll over you and straight into one of the deepest BJJ kneebar positions available. Make sure to take care with this one, as it can really injure someone if you fall awkwardly on their leg.

Bernardo Faria made this variation of the kneebar famous. Not many others have had plenty of success with it, but that’s because nobody is looking at the finer details of the move. And Bernardo has them all laid out for all of us.

What you need is an over-under pass to get into place. If you’re not a fan of the over-under pass, it doesn’t matter, as there will be no need to complete it. You just need it to enter the most unusual BJJ kneebar.  The goal is to trap the leg you’re controlling on the “over” side between your legs. The deeper your shoulders are in the hip crease of an opponent, the more leeway you have of getting the leg. What you’re aiming for is to do a triangle with your legs. This is what most people get wrong. The triangle should be really low, wedging behind the opponent’s ankle. The higher it is, the less pressure you’ll have for a kneebar.

For the finish, simply slide your legs back, trying to lay your body flat to the ground. This will get many taps, but if you need more, there’s still a lot of space to push the hips in and even pull a bit with the upper body.

Finally, an interesting way to wrap up a BJJ kneebar from a position we all have come to love lately – the 4/11. While most people look for heel hooks from there. If you want to keep things legal, you can switch to a kneebar. The trick is going for a modified kneebar, in order to be highly effective with it.

The Figure 8 kneebar means that you’re using a triangle configuration of your legs but including the “double trouble leg” in it. What this accomplishes is no way for the opponent to escape, plus a much tighter finish than a regular kneebar from the 4/11.

The BJJ kneebar is powerful but easy to defend if people see it coming. Once you’re deep enough, though, there’s almost no way out. That’s where smooth fast and unexpected entries come into play. The crazier the entry, the more probable you are to have success with it. Give some (or all) of the above a try and you’ll see what I mean.