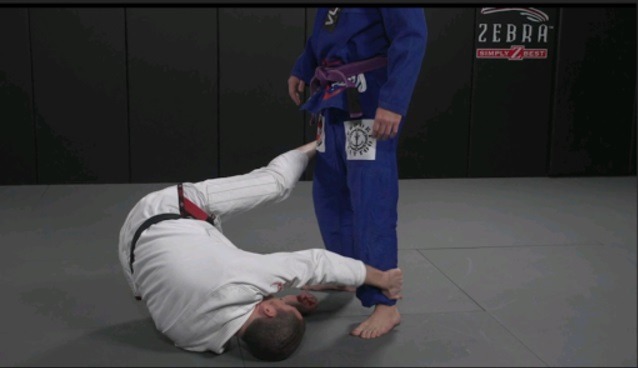 One of the coolest things you can do in BJJ is the Granby Roll. No, really! Even if you do the Granby Roll as a drill around the gym, as long as you’re doing it right, you ‘ll get people asking what it is and how they can learn it. In fact, just last week I showed it to a fundamentals group during the warm-ups, mostly as an experiment. People had a tough time with it, as expected, but loved the drill land actually asked for more time to keep trying it. Of course, the Granby Roll BJJ uses extend far more than just rolling around on the ground in a cool manner. In fact, you can do pretty much anything with the Granby Roll.

Even though it was clearly not intended as such in Gracie Jiu-Jitsu, the Granby Roll is one of the core movements of modern Brazilian Jiu-Jitsu. What started off as a wrestling move that BJJ folks stole to increase their guard retention rates, turned out to be much more than that. Today, the Granby Roll BJJ movement is everywhere, from attacking with Berimbolos and Imanaris to escaping difficult positions like turtle and side control. Plus, there’s no entry into inverted guards unless you master the Granby Roll, whether it is Tornado guard or any of the latest wacky lapel based inverted ones. Bottom line, you need to learn how to Granby Roll, and how to use it the right way.

Contents hide
What Is The Granby Roll?
Defensive Granby Roll BJJ Uses
An Offensive Approach To Granbys
Wrapping Up

What Is The Granby Roll?

The Granby Roll, as I mentioned, is an old wrestling maneuver.  In fact, in wrestling, it is categorized as a reversal, one popularized by coach Billy Martin Sr. from Granby High School in New York. You can see how the movement got its name. The roll itself is a cleaned-up version of the Peterson Roll which is a staple of defensive wrestling from as far back as the 1930s.

The Granby roll, as complicated as it may look, is actually pretty simple. There’s just one rule, and take it from someone who has learned it the hard way to be true – do not involve your neck at any point in the movement. That’s it. All that you need to be thinking about is rolling from shoulder to shoulder. Granted, the move requires you to go upside down, but there are mechanics behind it that make it safe first, and extremely effective in grappling second.

In essence, the point of doing a Granby Roll BJJ maneuver is to improve your positioning fast and ina an unusual manner. The Granby can take you around opponents’ defense, or it can get you straight out of their attacks. All you have to do is roll from one shoulder to the other. The catch is that your legs need to be folded over your head as you do this. But there’s a trick here too – the move actually harder when you do it as s drill. Granby Rolls work amazingly well when an opponent is trying to pressure you back and play their game.

The first fo many Granby Roll BJJ uses that I learned was a defensive one. The Granby is irreplaceable when it comes to guard retention. the best part about it is that it is the last resort option in many situations, but one that has the highest ratio of success. Whenever someone is trying to pass your guard you have so many opportunities hen you can simply turn your guard upside down. It closes all possible angles and often causes passers to reset, giving you the opportunity to get back to your favorite guard position.

Taking a closer look at the Granby Roll we can see that it is simply an extension of the sit out. In wrestling, the Granby is used as a reversal whenever a wrestler was heading for a back take. Usually, wrestlers would sit out, but hen had to throw in an additional shoulder to shoulder troll to evade the pin. Hence, the Granby Roll came to work in a defensive manner.

The same maneuver works perfectly well for BJJ too. Whether you’re in a turtle position on the bottom, or in bottom side control you can use the Granby to get out with ease. In terms of turtle, it works perfectly to get you back to guard, while keeping you safe at the same time. When it comes to side control, you’ll really need to get the hang of it, but it can definitely come in useful. Plus, spinning on the ground like that is the perfect way of setting up counter attacks as you’re escaping.

An Offensive Approach To Granbys

Of course, the Granby Roll BJJ movement wouldn’t become such a staple only as a defensive maneuver. Berimbolos took the move to unexpected heights, spurring on plenty of new and innovative uses for it. The Berimbolo uses the Granby Roll as the key component when it comes to transition from an open guard, like the De la Riva, to back control. Of course, grips and other mechanics come into play, but the core of it all is the Granby.

The most notable use of the Granby roll in modern Jiu-Jitsu, though, has to be the Imanari roll. It is not modern, per se, given that Imanairi used to do it early on, but it has been perfected in recent years. In short, the Imanari roll is a Granby roll that leads right into the Honeyhole / Inside Senkaku position which is the most powerful leg locking position out there. It looks extremely cool. Moreover, you can pull it off from just about anywhere, from standing to open guards and even as a counter to takedowns.

There’s also a more controlled version of using the Granby Roll BJJ move as opposed to the fast-paced nature of the Berimobolo and Imanari rolls. Cyborg’s Tornado Guard is the perfect example. There’ you use just half of the movement to get yourself in an inverted position. The starting point is the half guard, and the options from there vary, from sweeps to armbars and kneebar attacks.

If you really want to learn the Granby Roll BJJ maneuver, then you have to spend a considerable amount of time drilling it. Make sure you do it right. by going shoulder to shoulder and not placing pressure on your neck. Apart from that, you can explore its uses and make up new ones as you wish. Ther’s still a lot to come from the Granby Roll n grappling, and we can’t wait to see what ti’s next great use si going to be all about.