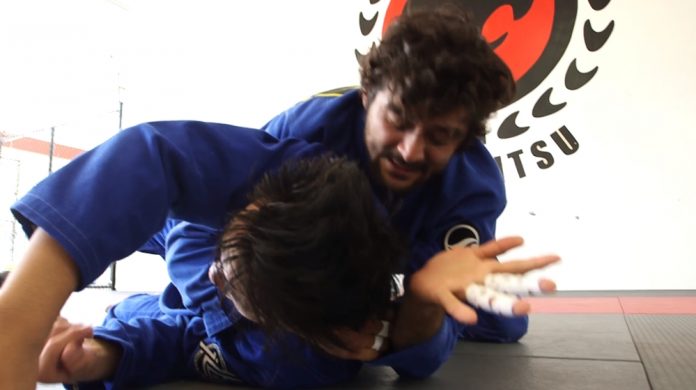 The BJJ Ezekiel Choke is not a technique that many grapplers like to set up carefully and intentionally. Instead, it is a choke most people use to either make an opponent commit a mistake in order to pass or as a blitz attacking option. Still, this choke is a very potent weapon in any format of combat sports, and in particular, grappling martial arts. The BJJ Ezekiel Choke works in its classic setup with the Gi, works without the gi, and has a number of variations that make it truly remarkable. In fact, Ezekiel Chokes constitute a mini system of their own. Today, we’ll be dissecting the arm-in Ezekiel, arguably the most useful and secure variation of the choke.

People are slowly becoming wiser to the BJJ Ezekiel Choke and its potential lately. One man responsible for this is UFC fighter Aleksei Oleinik, who pulled the Ezekiel choke from the bottom of the mount. So, if it works in the Octagon, from one of the most inferior positions possible, it’ll certainly work on the Jiu-Jitsu mats. However, our focus today is on a variation of the Ezekiel that is pretty much universal. In that sense, it works both with and without the Gi and is available from pretty much every position you can find yourself in. The Arm-In Ezekiel is the ultimate weapon to make sure you get a submission, regardless if it’s your first choice or just a follow-up.

Extend your arsenal of sneaky moves that people won’t see coming with a great video instructional. Alexandre Vieira has the black box of secrets for incredible loop chokes and crucifix attacks. Check out his “Crucifix And Loop Chokes” DVD set for detailed instructions!

The classic BJJ Ezekiel choke is a real nasty piece of technique. This move developed as a result of the efforts of a certain Judoka by the name of Ezequiel Paraguassu. While preparing for the Olympics he decides to throw in some BJJ training in the mix and chose Carlson Gracie’s to do so. What we today know as the BJJ Ezekiel choke came purely by accident when Paraguassu was stuck in the closed guard. His instinctive reaction guided him to the old judo choke called Sode Guruma Jime which is the forefather of the modern Ezekiel choke.

The original Ezekiel Choke is nothing fancy and pretty. It is a direct, simple choke that results in both a sensation of choking as well as immense pain. Since it turned out the move could choke someone while they were in guard, Carlson decided to look into it. After a lot of experimentation, the result was a move that later branched out into plenty of variations of its own. Do not kid yourself thinking you can successfully pull off an Ezekiel Choke that’s going to be a pure blood choke. The cold hard and painful truth is that this is mostly an air choke, which can double as a blood choke under certain circumstances.

From the mount position, the BJJ Ezekiel Choke is really easy to get. Most people already have an arm under the head of an opponent, which means there’s no need to do complex setups. All it takes is to put the four fingers of the arm that’s under the head deep inside the sleeve of your other arm. The hand of this second arm then goes as deep across the neck as possible. Finishing is almost effortless, whether you keep a blade hand or make a fist.

Since the preference in BJJ, especially modern detail-based Jiu-Jitsu is a clean and effective technique based on leverage, the Ezekiel Choke is considered a crude weapon. So normally, the choke evolved. One of the cleaner variations that eventually arose was the Arm-In Ezekiel Choke. Mechanically speaking, this is a clean blood choke, with no pressure on the trachea whatsoever. While this does take from the pain of the original choke, it is a far more effective way of submitting opponents of all sizes. Plus it is universally effective in both Gi and No-Gi.

The best use of this choke is definitely with the Gi. From side control, an opponent is going to set themselves up just by slightly turning away from you. The moment the opponent exposes a bit of their back, the aim is to slide the arm that’s closer to their hip around their neck. However, it is imperative to trap the top arm of the opponent as well, rather than just the neck. The palm of that arm needs to end up pointing towards you on the other side of the opponent’s neck. This is where you’ll use the fingers of that arm to grab the sleeve of your other, free arm. Just like with the classic Ezekiel. For a finish, all you need to do is sit back so that the opponent ends up on their back.

Back control is a great example of how you can hit this choke without the Gi. Longer limbs are definitely an advantage but not a condition for success. When you have the seatbelt in, you’re actually ready. All you need to do is transfer the bottom arm across the neck so that it ends up across the shoulder. Simply put in a figure-four grip and squeeze to finish.

When To Look For The Arm-In Ezekiel

The Arm-In variation of the BJJ Ezekiel Choke is a very good option to hunt for by itself. Anytime you have the option of inserting an arm in a seatbelt-like position, you should at least consider it. Granted, it does come easier from certain positions. But it also works very effectively and ties in great with other different attacks. The Rear-Naked Choke and arm triangle are just two examples.

The turtle is one spot that offers easy access to the Arm-In Ezekiel Choke. All it takes for you to be in the “basic” turtle position. It actually requires a lot less setting up than back attacks or guillotines. All you need to do is quickly thread an arm under the armpit and across the neck. The beauty is that you can do it on both sides, depending on the situation. This gives you a lot of versatility with just one attack. For a finish, you still need to end up in the same position as we described above.

You could also always hit the Arm-In Ezekiel from a guard pass. The Leg drag is a particularly good spot for it. All you need to do is make sure you have a grip on the collar from the top side. Actually, you’ll have hardly any success with the leg drag if you don’t have this grip.

Arm triangles are the next-door neighbors of the Arm-in Ezekiel. They combine easily to render your opponent powerless. All you need to do when an arm triangle is not working is fit the opponent’s head off the mats. Then, just switch to the arm-in Ezekiel. It’ll guarantee you get a tap.

Ezekiel Choke – Gi and No Gi Details and Mechanics