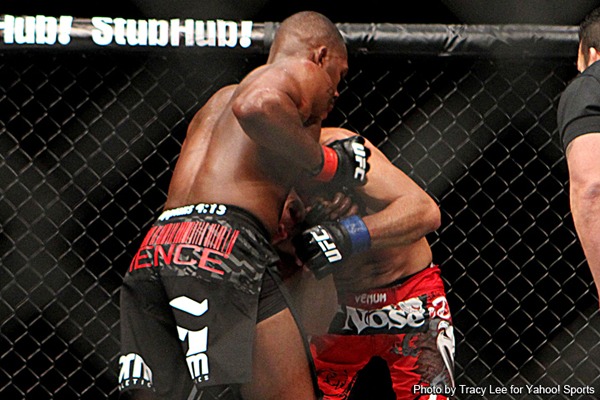 When it comes to guillotine chokes in BJJ, most people think they can get out fairly easily. having one defense, and perhaps the Von Flue choke in your arsenal is actually a pretty good defensive strategy against guillotine chokes. However, guillotine chokes are a very sneaky category of submissions. there are plenty of varieties and they work from virtually everywhere. that involves the standing position. While the standing guillotine is somewhat rare in BJJ competition, it does work and is often used in MMA and no-gi grappling. This aspect of guillotine defense is something most people do not consider important until it is too late.

The standing guillotine offers a very unique problem. Unlike on the ground, there are no legs to impede motion in lateral directions. This means you can move to each side. However, the problem you face is one of very very strong posture control. Alongside that, the opponent has a lot of space to finish the choke. Since you’re far off the ground, gravity is going to be working against you here. This makes standing guillotine defense something that you need to pay specific attention to. Why? Because believing your ground guillotine defense strategy will work on the feet is a great way to get you napping fast.

Tom DeBlass is the most “unsubmittable” grappler in the world at the moment. okay, he does tap but it is so rare that decades might pass between two taps. This sal due to his successful submission defense. His DVD set “Submission Escapes” has everything you need to master counters to all submissions, including all kinds of guillotines.

The standing guillotine is basically a Marcelotine done on the feet. While the grips might differentiate between a Marcelotine, high elbow guillotine, and a power guillotine, the configuration remains the same. the opponent is going to have your head under their armpit, with a tight lock around your neck. The advantage for your opponent si that their whole weight is behind you, so posturing up is impossible. On top of that, they have a lot of leverage available to get the choke in. This means they can switch between air and blood chokes, making life a real hell for you. Unless you can defend properly.

The standing guillotine choke is quite easy to prevent – keep your head higher than your opponents. This theory, however, does not translate into a successful standing guillotine defense. Staying upright is just going to open you up to all kinds of takedowns. So, this is definitely not an option. The truth is, you’ll find yourself in a standing guillotine at one point or another during your BJJ career.

Standing guillotine defense options all revolve around one main principle – creating space. The real issue here is that creating the space you need to keep breathing until you mount a defense is really hard to obtain. Unsurprisingly, most guillotine defense techniques are based on the fact that you can move laterally without any restriction. This makes lateral movement your only way of creating space to get out of a tight-standing guillotine choke.

While standing and grounded guillotine defenses do differ, there are still some main traits to both. One such example is the fact that you must have control over the wrist of the choking arm. without it, no defense, standing, or on the ground has any hope of working. The following three defense options all include a common thread – grabbing the choking arm. Since they all work off the same principle,  you can combine them between each other, until you manage to make one of them work. Just remember, not getting choke is problem number one. Getting out of the guillotine position comes in second.

As funny as this may seem, hopping around like a bunny is actually our best bet. Why should you ho? Well, if you’re caught in a standing guillotine, every hop is going to achieve two things. First, it’s going to help you create space. Next, it is going to provide make your opponent’s arms tired over time. However, not just any kind of hopping is going to help you here.

The moment you’re caught in a standing guillotine your first reaction needs to be to get one of your arms over the opponent’s shoulder. This should be the arm that’s on the side opposite of where your head is placed. This is going to provide a hook that you can use as a power source to create space. Furthermore, the other arm should build a frame on the opponent’s thigh on the other side. this means you can create space in a diagonal pattern, and even use it to take the opponent down.

Once you have your arms in place you can start hopping, aiming to get both your legs to the side of your opponent’s far side leg. this is the side opposite of where your head is. Once you have it, a simple pull and push with your arms is going to get the opponent down. WEHiel you can go for a Von Flue choke, a better bet is to skip over and go straight into an arm-triangle choke.

You could also use a similar approach to go straight into a takedown, thus completely rendering the guillotine ineffective. The one main thing to remember here is posture. Despite the fact you might not be able to truly regain full posture, you must make an effort to raise as far up as you can. Of course, you’ll need to keep an arm on the choking arm at all times. From there on, you can focus on changing the angle. Just like with the hopping guillotine defense, you’ll want to get out toward the side opposite of the choking arm.

This angle creates an opening for you to go into a few different takedowns. You could pick up the near side leg for a single-leg takedown, for example. Or, you could go for a body lock and get the opponent to the ground that way. Of course, there’s the option of a double leg as well, but that might get you too square to your opponent, meaning they can finish the choke. Personally, I like to stick to the single-leg takedown from there.

The final guillotine defense is actually one that’s the highest percentage of them all. It is also the mechanically simplest one. Still, it requires you to go against everything you know about guillotine defenses, so it may not be the best one to start with. It is, however, one that works at the highest levels of the sport.

Braulio Estima calls this defense the Anti Guillotine. When you’re in a standing guillotine, the goal is to place both hands on the opponent’s hips. When you do this, you’ll be looking to go back with your legs as far as possible. this creates the space you need, despite looking like it is going to choke you. The reason for this is that the escape actually goes in the other direction. Once you manage to straighten your arms you just need to circle your head out of the opponent’s grips. This means you’ll be stepping towards the choking side. The direction of the circle is toward the side opposite of the choke, of course. it is a very simple one, yet it may be uncomfortable until you get the hang of it.