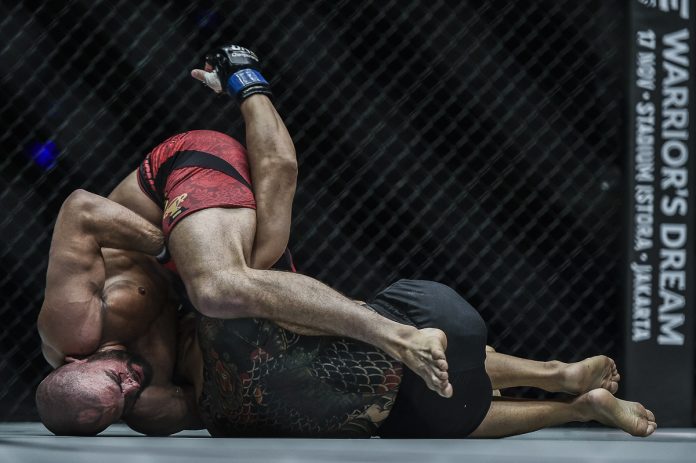 Out of all the front headlock chokes available, none is more powerful than the high elbow guillotine. The guillotine choke is the first choice of a submission from there anyway. The old school choice is the arm-in guillotine choke. As effective as it can be, it is still an air choke, which means it’s less reliable than blood chokes. There’s also the “regular” guillotine, which is indeed a blood choke. However, this one is really easy to defend, so it is a medium-percentage submission at best. Which is where Marcelo came in, paving the way for the high elbow guillotine through his modification named the Marcelotine.

When the Marcelotine hit the stage, people suddenly got a high-percentage guillotine option that worked as a blood choke. Sound perfect right? The only issue with Marcelo Garcia is that he is Marcelo Garcia. He is built in a certain way and has physical attributes that not many of the grappling population share. While no one can dispute the effectiveness of his techniques, they’re hard to work for everyone. This is where the modern day BJJ guru swept in to clear up all the confusion. John Danaher is the man who gave the high elbow guillotine it’s the latest twist. Now, the move is available to everyone regardless of flexibility or experience level. And in this article, we’ll get over all the juicy details.

John Danaher has been on a DVD recording spree lately. So far, his DVD collection has four distinct volumes, one of which is the ultimate guide to Guillotine chokes. “Enter The System: Front Headlocks” is an 8 part DVD set that covers everything there is about the front headlock position. Setups, entries, submissions, and transitions are all explained in great detail by the master himself.

BJJ chokes usually work in one of the effective strangling ways. In terms of putting someone to sleep, the goal is the same – cut off the oxygen supply. The two main avenues of doing this are by direct pressure on the airways, or by blocking the arteries that supply the brain. The first variety is known as artichokes, while those that target the carotid arteries are blood chokes. Guillotines can work in both of these ways.

The arm in guillotine usually works as an air choke, due to the positioning of the wrist and forearm. Having an arm included in the loop means your arms are stretched to the maximum. This is particularly obvious against larger opponents. It also means that there’s no way to compress the arteries. Instead, the focus is on blocking the trachea, right below the larynx. This means that the choke is particularly nasty as it has a pain component in addition to oxygen deprivation.

The regular guillotine is a curious one. It works mostly as a blood choke, but it can also double as an air choke. It all depends on how deep the wrist is and which part of your hand/forearm you’re using to choke. For the regular guillotine, there’s less space, because the arm is not included. This means that it is a tighter choke, but it is quite easy to defend. IF an opponent gets a grip on your palms, plus a grip on the elbow of one of the arms it’s all done and dusted. Which is where the high elbow guillotine comes in, as a pure and unstoppable blood choke.

What John Danaher brought as a change in the high elbow guillotine was specific and precise positioning. This includes positioning of the wrists and palms, the elbows and the legs. Moreover, it includes very specific body positioning to remove all the flexibility obstacles that the Marcelotine had.

First up is wrist depth. The reason a high elbow guillotine works so well is that it is an unstoppable blood choke. This is due to the depth of the choking arm and the positioning of your grip. TUnliek usual guillotine setups, the choking arm need to be as deep as possible her. Actually, the goal is to have your palm stick out over the opponent’s opposite shoulder. Only then can you proceed to place a grip in place. The free arm needs to grip the top of the palm of the choking arm. In turn, the palm itself needs to be facing the neck in order to ensure maximum choking pressure.

Do you ever wonder why this guillotine variation has such an unusual elbow position? The high elbow actually allows you to get your wrist deep into the opponent’s shoulder and cover it with your other arm. This prevents both usual guillotine defenses – breaking your grip and/or controlling your elbow.

Finally, your legs. There are two main positions that you can have your legs in. One is with the bottom leg in half guard, while the other has it as a shield across the opponent’s hips. What’s really important is the top leg, which has only one position – across the back. Remember to point your toes straight, like a ballerina’s foot to ensure your leg stays in place. This is a crucial detail to maintain broken posture.

The best position to get guillotine choke, in general, is the front headlock position. For the high elbow guillotine, there’s actually no better setups. The first thing to have in mind here is grip fighting. Until you get to the centerline shift, you absolutely have to be in command of the grip fight. This means you need a solid and unmovable chin strap grip on the opponent’s jaw. Furthermore, you need to make sure you have control over the opposite side elbow. Triceps control with an overgrip is the best here, although an undergrip can also do the job. Make sure your opponent doesn’t have access to your chin strap arm before you go fro the centerline shift.

The centerline shift is actually the most important innovation, courtesy of Danaher. I make setting up the high elbow guillotine a breeze for everyone, eliminating shoulder flexibility as a prerequisite. For a centerline shift, what you aim to do is place your head over the shoulder where the choking arm is. This is going to open space up for you to thread the choking arm really deep. It also makes the high elbow position possible, due to the angle. And, as we know, the high elbow position is important for actually bringing the wrists and palms deeper towards the neck.

On a final note, falling back from a front headlock setup can be specific. The goal is to get the leg that goes over the back in position first. The goal is to get it before you fall to your side. Even if you get it over after, remember that your chest needs to stay in contact with the back of the opponent’s head at all times.

What Makes The Marcelotine Better Than A Regular Guillotine