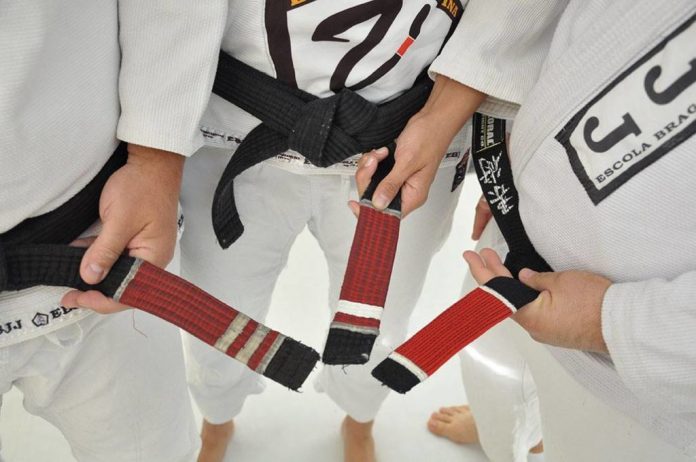 Why do you train BJJ? Answer this question before you continue reading the article. It doesn’t matter if you want to admit it to yourself or not, getting a belt, whether it is the next one, or a black belt is somewhere in the back of your mind. It is the same with everyone, and let’s not fool ourselves. The only people not wanting a black belt are the ones that already have one around their waist. It is perfectly normal. Still, probably more than anything, I get asked belt-related questions all the time. So, let’s try and settle things once and for all, and explain everything about grading, rankings, BJJ belt progression, what happens after the black belt, etc.

Earning a Brazilian Jiu-Jitsu belt is a huge milestone in everyone’s journey. It is a measurable way of gauging progress, as it is meant to be. That said, people often times try to rush belts, buy them or use other shortcuts. McDojos that sell belts, as well as belt skipping are entirely out of line and no one in their right mind will endorse such actions. There’s a simple reason for that – BJJ belt progression represents personal progress, and you can’t fake what you know when it comes to grappling. Then again, when all is legit and well, what do belts mean and how exactly does BJJ Belt progression go? After all, if BJ Jis needless, how come there’s an end to belts?

Contents hide
The BJJ Belt System
The BJJ Belt Progression – Colored Belts
The Legitimacy Of Black Belt
What Happens After The Black Belt?
Wrapping Up

Let me make things simple. I have an article in the works regarding these same subjects, only for BJJ kids’ belts. Since they have quite a few more than adults, it merits a separate piece. For now, we’ll be looking at the adult belts and the BJJ belt system. 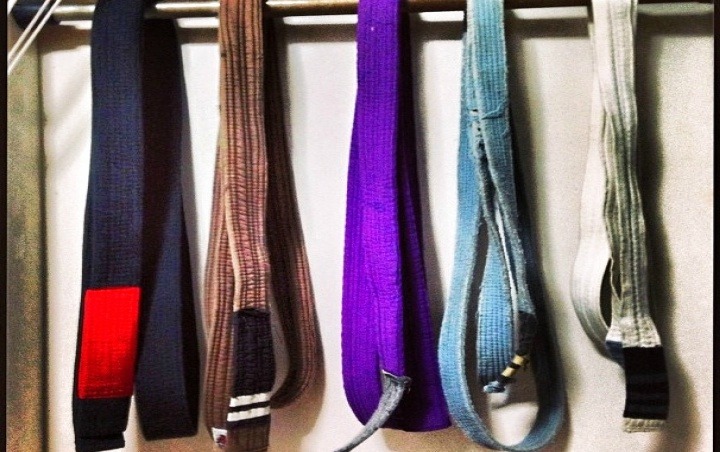 In essence, the BJJ Belt system is by far the least complicated of all martial arts I’ve trained in. There are five belts, they go in a specific order and you need to get through each of them. Getting through means spending enough time so that you reach the next level. That refers to technical and tactical knowledge as well as the mindset that comes with every belt. To that extent, belt promotions in Jiu-Jitsu go by way of merit, rather than tests or belt fees. It is simple – when your time comes for a promotion an instructor will tie a belt around your waist.

That said, the BJJ belt progression has five steps. It starts at white when you walk through the doors. You then progress to a BJJ blue belt, the arguably most coveted belt in the entire sport. Purple and brown follow, otherwise known as the “fun” belts. Finally, it is time to get a black belt and become an expert. However only half of this last sentiment is true. Yes, you become an expert as a black belt. However, there’s nothing final about it.

I’ve said it times and times again, the most sought after belt in the entire sport is not the black, but rather the blue one. Nobody likes to be a beginner, and even if it was a slightly darker shade of white that was the next belt, people would still do anything to get it. This is precisely why we have one of the biggest conundrums in BJJ at the blue belt – the blue belt blues. Namely, after they get their blue belts, many people end up quitting JIu-Jitsu. The reason behind this is unknown, but I’d bet you that that feeling of achievement of getting a belt and not being a beginner anymore has something to do with it. That, and the fact that it takes time and dedication to reach the blue belt.

The BJJ belt progression is a weird thing. You won’t believe the time it takes to reach blue belt, and then, you have to do it all over again, and more to reach purple. Of course, people are going to drop out. However, the reward that awaits on the other side s well worth it. At purple belt, everything opens up and people start inventing their own stuff. It is also where you should spend most of your time developing as a BJJ grappler.

Given the sheer volume of things to learn in Ju-Jitsu, and no just form a technical perspective, each of these belts takes about 2 years to master. You might get your blue within a year, but you’ll probably make up for it at purple. It boils down to the same time span. Only then, after begin belt whipped in the gauntlet four times, will you earn the highest Jiu-Jitsu honor for mortals – the black belt. Without whipping this time around.

The Legitimacy Of Black Belt

Getting a black belt, though is only half of the equation. Unfortunately, nowadays, there are fake black belts, bought black belts, online black belts… that’s before I even mention those that promote straight from blue to black or those that decide to promote themselves. Before we see what happens with the BJJ Belt progression after you receive a black belt, let’s discuss belt legitimacy for a bit. 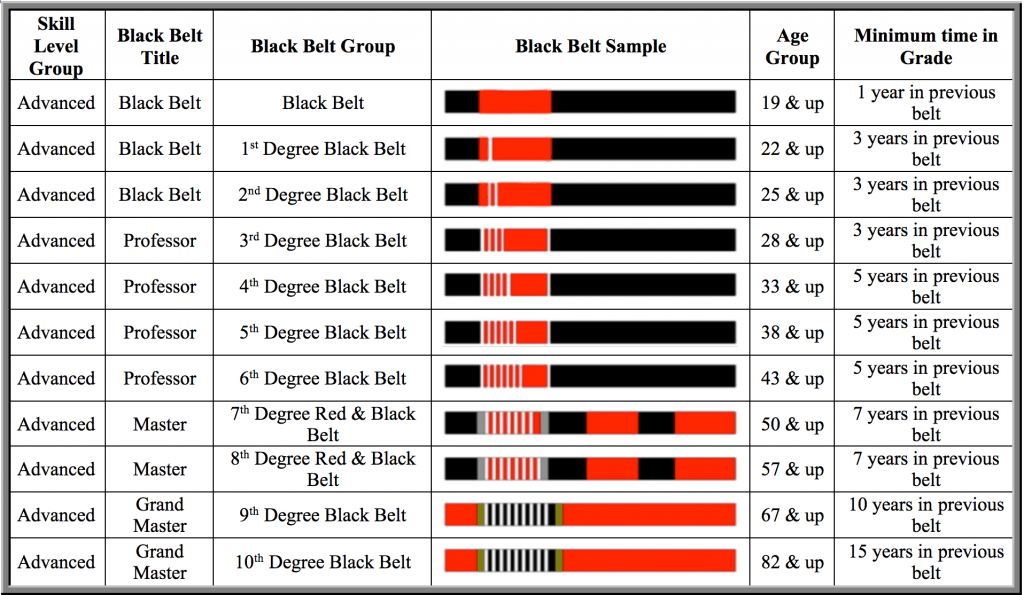 In essence, every black belt should have clear linage, one that can be accounted for. That means that all legitimate black belts in the world have a lineage that leads to either the Gracies or some other founding members, like Oswaldo Fadda. To that extent, the person who awarded you your black belt should always be available to confirm it. That’s the easy way. The hard way is to actually get approved and registered with the IBJJF, which means time and money. If you want to compete as a black belt in any IBJJF tournament, you have to go through with this. However, if you’re not interested in it all, the lineage will speak for itself, although what you do on the mats is much more important.

After getting your black belt, though, there is more, much more. For starters, you get to get more stripes. In fact, black belts can get up to six stripes. It takes 3 years between the first three stripes. When you get there, you also earn the rank of Professor, meaning you get a stripe on each side of the red portion of your belt as well. From there on, the next three stripes take 5 years in between to earn. Then you move on to the next belt. Wait, what? Yeah, there’s more…

What Happens After The Black Belt?

After you spend at least 32 years at black belt, with all stripes, of course, and only after the age of 50, you become eligible for the next level- the coral belt. The belt is a red and black belt, and the name is after the coral snake. Prior to 2013, there were two grades of the red and black coral belt, the first with seven and second with 8 stripes. However, the IBJJF deemed it necessary to make a clear distinction between the two. So now, the eight-degree coral bet (eight stripes) is a red and white one, rather than a red and black belt. People with coral belts earn the title of “Master”. It takes 7 years to move from one to the other coral belt.

The final belt (really) in the BJJ Belt progression is the red belt. Achieving this one, or the title of “Grandmaster” is a feat reserved for just a few, although it is not uncommon. It takes 10 years at the rank of a white and red coral belt, plus an age of at least 67 years to reach the red belt. The very final step is the 10th-degree red belt, which requires 15 years at the previous belt level. In other words, if you see a red belt that’s not at least 82 years old, we’re down to the legitimacy issue once again.

Going through the BJJ belts is the work of a lifetime, that’s for certain. Every step of the way is lots of fun, even when you’re getting “beaten to a pulp”. There’s really nothing like BJJ, and the BJJ belt progression is a huge part of it. Understanding what awaits ate every level might help you manage your expectations at least until such a time when you really immense in the art, and forget about all the belt stuff.