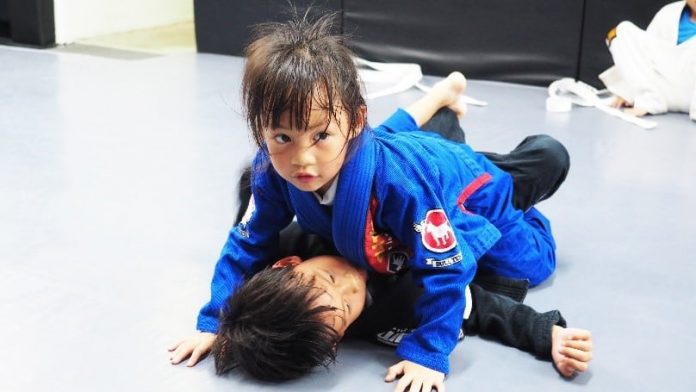 In nearly 20 years spent teaching kids martial arts, including BJJ, I can claim with certainty that there’s hardly anything better a kid can do than train Jiu-Jitsu. Physically speaking, it may only be second to gymnastics for kids, particularly young ones. However, in an overall sense, BJJ beats any physical (and many mental) activities a kid can do. Particularly in this modern age. Kids simply love it as well, making it the perfect combination. What they also love are the belts and stripes as well, which are different than those with adults. Let’s see how these Jiu-Jitsu belt ranks for kids actually work.

The belts really do make Jiu-Jitsu more interesting. They’re a huge deal, even among adults. To kids though, they mean the entire world. Stripes, for example, can make kids the happiest people alive. Getting their next belt, is a life-changing event for them. And it should be the Jiu-Jitsu belt ranks are there in order to provide a much-needed structure for kids. They represent much more than just a BJJ rank and help teach them very valuable lessons in a unique way. 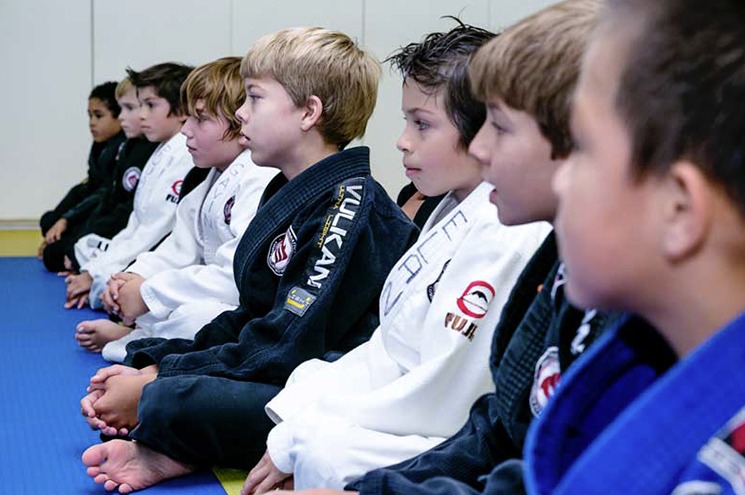 Kids’ BJJ classes are one of the things in my life that I plan on doing as far as I am capable of. I’ve taught Karate and a bit of Judo for about a decade before starting to do the same with BJJ. What Jiu-Jitsu has to offer is everything that other martial arts have. It offers a very solid foundation for kids to learn about structure. However, as opposed to traditional martial arts, the structure of BJJ is pretty flexible.

It will teach kids discipline, passion, courage, respect, and other huge lessons. However, it will do it In a less rigid way, compared to other sports. Moreover, it encourages critical thinking on a different level than any other educational system out here, including the school system. Jiu-Jitsu teaches kids to embrace their individuality and use it to their full potential. At the same time, it is successful at making kid team players and helps them build strong friendships and social bonds. They will also learn the lesson of progress and perseverance through the Jiu-Jitsu belt ranks.

On a more physical note, Jiu-Jitsu will help any child develop properly. Classes are organized not just in a way to teach them techniques, but also feature lots of movement and coordination drills, spatial awareness, and other physical aspects that are forgotten nowadays. Of course, there’s also the self-defense aspect, with BJJ being the number one way of helping kids deal with bullying. Plus, there’s the added value of teaching kids how to play – something we don’t see as often as we should from them these days.

Jiu-jitsu has a slightly different system than other martial arts. Between the white and black belts, there are only a few belts as far as adults are concerned. The roots of the belt system are still in Japanese Judo, but some belts are missing. In fact, the Gracies initially only wore white and blue belts, blue marking the advanced students. Even Japan had a single or dual belt system in the past, for Judo.

The modern way of awarding multiple different colored belts has to do with the spread of Judo throughout the western world. Instant gratification is what most westerners are after, so Judokas decided to give it to them by introducing colored belts n addition to the white and black they had. BJJ has a system that is based on this evolution of the Judo belt system.

In BJJ, you don’t get a blet by demonstrating techniques. There are some gyms that do it, but in general, belts are earned by working every training. The way you get promoted is you get called out in front of everyone, and your instructor wraps a new belt around your waist. It is immensely more rewarding and motivating when done this way than when you’re doing a test. Now imagine if adults are so happy, how ecstatic the kids are when they go up through the Jiu-Jitsu belt ranks.

How The Jiu-Jitsu Ranks For Kids Work

The JIu-JItsu belt ranks for kids include many more colors and variations of blets than the adults. Even more so, there are also more stripes involved. This allows kids to make visible progress on a regular basis which is huge for them. Waiting for a year to get a promotion is a long time, even for adults. For kids, that’s eternity. Instead, the kids’ Jiu-Jitsu belt ranks work by offering them incentives and reward on a much more frequent basis than adults, that is the reason there are so many variations of the belts and stripes for kids. 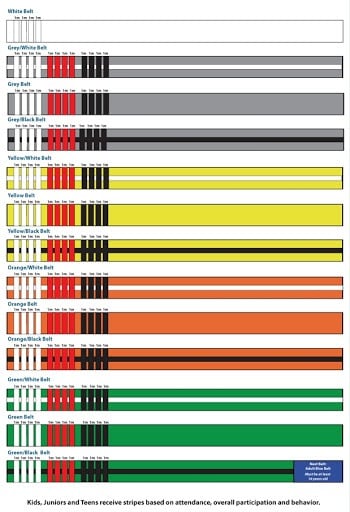 In the kids’ Jiu-Jitsu belt ranks, there are 13 belts in total. The white belt is the same as in adults, there’s just one more stripe with 5 being the total number The final one is red, setting it apart from the classic white ones. Following the white are grey, yellow, orange and green. However, each of them has three variations of the belt color, making them 12 in the ranks. The first in each category has a horizontal white line running the length of the belt. The second one is plain colored, while the third has a black stripe identical to the white one. In other words, there’s white to black in each of the kids’ belt ranks.

In terms of stripes, after the white belt kids need 4 white stripes, 4 red ones, and 3 black ones to get the next belt. That provides lots and lots of motivation and allows for promotions to be held way more often. In turn, kids get to visually measure their progress and learn that hard work will get them up the ladder in a very quick time. The whole system works, and when you understand why there are so many belts and stripes it makes even more sense.

The kids’ Jiu-Jitsu belt ranks only help Brazilian Jiu-Jitsu kid’s classes become more efficient in their goal – raise kids to be successful adults. Look at BJJ classes as part of the educational process rather than just sports. There is a lot that kids will learn in JIu-Jitsu, that they can’t really learn elsewhere, at least not at an early age. And not, the large number of belts is not there for any selfish reason. It is there for the kids.

Brazilian Jiu-Jitsu Belts Explained: The Ultimate BJJ Belts Guide
What Is The Best Age For Kids To Start Jiu-Jitsu?