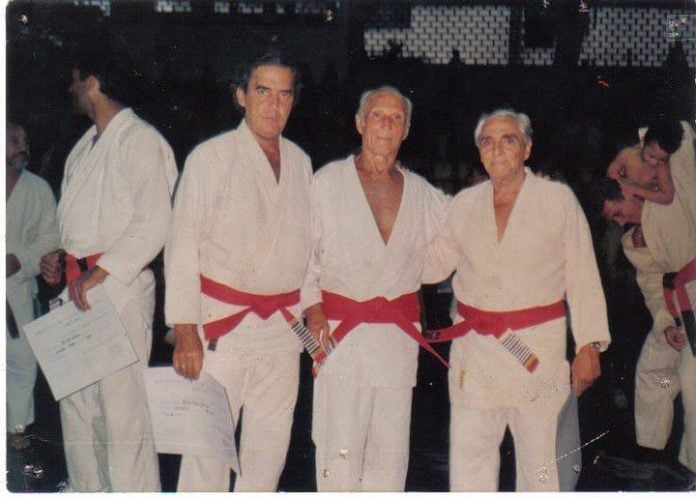 According to Renzo & Royler Gracie, the red belt in Brazilian Jiu-Jitsu is reserved for those whose influence and fame takes them to the pinnacle of the art. It is awarded in lieu of a 9th and 10th-degree black belt.

If a Brazilian Jiu-Jitsu practitioner receives a black belt when they’re 19-yr-old, they could expect to receive a 9th-degree red belt around the age of 67. Together with a Red Belt, BJJ practitioners are awarded a Grand Master title.

Carlos Gracie Sr. is the founder of Brazilian Jiu-Jitsu and the brother of Helio Gracie. he is the person behind the rise of BJJ worldwide. His son, Carlos Gracie Jr. continued his father’s work, which culminated with the formation of Gracie Barra and the IBJJF. Along with his brother Helio, Carlos Sr. started the first BJJ academy in Brazil.

He was Helio and Carlos’ brother and was one of the first to help out in the newly formed academy, along with Oswaldo Gracie. Gastao wasn’t a very competitive person and spent some time teaching in the academy. He later moved to Sao Paolo and became a BJJ teacher of prominent celebrities, such as Congressmen.

He was the first champion that came out of the family. He was more of a fighter than a teacher and spent his time fighting all over Brazil. His teacher was his brother, Carlos Gracie. He went unbeaten for a very long time, flying the Gracie Jiu-Jitsu flag along the way.

As far as famous red belts go, Helio is always going to be on top of the list. While involved in creating BJJ with Carlos he was always more of a fighter than an entrepreneur. He always believed in BJJ as a practical, self-defense art and taught accordingly. He fought everyone at anytime, with matches often going on for hours. His sons keep this tradition alive to this very day, Rickson Gracie in particular. 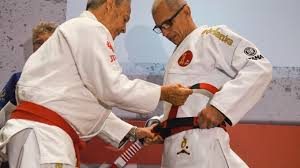 Here’s a list of people with red belts outside the Gracie family who have managed to achieve the top honor possible in BJJ. Don’t be confused by the inclusion of several Gracies in this list, as they still haven’t reached the pinnacle that is the 10th degree.

He is the first non-Gracie member to achieve a red belt. During the 40’s and 50’s, he was one of Gracies’ top fighters. He was instrumental in the spread of BJJ in Sao Paolo.

Unbeaten during the 50s, he was a red belt of Helio Gracie’s. His brothers Alvaro and Sergio are also BJJ red belts.

He is the third son of Carlos Gracie Sr. He helped spread Jiu-Jitsu in the states of Amazona and Bahia.

He was both a student of Helio Gracie and João Alberto Barreto. His sons are also prominent BJJ figures.

One of the most important figures in Brazilian Jiu-Jitsu. Even today, he is considered to be one of the top practitioners alive. His Carlson Gracie Academy is a breeding ground for top BJJ athletes. He is a son of Carlos Gracie Sr. and, without question, one of the top red belts in the world.

The 11th child of Carlos Gracie, Carley is known as “the Lion of the Gracie Family”. He is the first Gracie to bring BJJ to the United States. Omoplata wizard and top BJJ competitor Clark Gracie is one of Carley’s sons.

Geny founded the Serrana Academy (Academia Serrana) one of the most important grappling schools in Brazil. He was an Helio Gracie red belt who produced athletes like Admilson Bitta, Ailson “Jucão” Brites and Hélio Soneca.

Another of Helio Gracie’s red belts, Armando is one more pioneer of BJJ. he represented Gracie Jiu-Jitsu in no holds barred competition.

Fadda was probably the most important non-Gracie figure in BJJ in the early days of the art. He was a rival of the Gracies and a very influential figure in Rio. Fadda is one of the rare people who valued leg locks during the old days of BJJ. In a 10 vs 10 challenge between him and Helio, his students won 9 matches via leg locks. It is rumored to be one of the reasons why Gracie Jiu-Jitsu outlawed them.

He was a famous plastic surgeon and student of Hélio Gracie. He got the red belt after 50 years of experience under Helio. Often, during his youthful days, he had to use Jiu-Jitsu to defend himself, which he did with great success.

He was an Oswaldo Fadda black belt. One of his most known actions is disarming an armed robber in a Rio De Janeiro train.

Helio Gracie’s eldest son. Despite Carley Gracie being the first to bring BJJ to the USA, Rorion was the most successful one in spreading it. He is the person behind the UFC which turned out to be a multi-billion organization today. Rorion was the person who chose Royce Gracie as the family’s representative in the first UFC event.

Relson is the second son of Grand Master Helio Gracie. He was the first to establish an academy at the archipelago of Hawaii. He was also known for his love of surfing which is a favorite pastime of BJJ athletes even now.

Master Francisco Sá is one of the most important instructors from the region of Ceará in Brazil. The academy developed several important fighters and is affiliated with the Nova Uniao team.

Amelio Arruda was a kindly and educated fellow who was a fierce competitor. He was based out of the east of Niteroi.

A student of Carlson Gracie and one of the more recent red belts. He received his red belt and the ninth grade in April 2014.

A red belt since 2012, he was a prominent student of Jorge Gracie.

An important 9th Degree Red Belt of the Gentle Art. A great feat of his is going undefeated for a decade in Vale Tudo competition. He is the father of Crézio Sousa, a prominent Carlson Gracie Academy member.

Deoclecio Paulo, AKA “Master Deo” is an Oswaldo Fadda black belt and one of his top competitors. Paulo has taught all over Brazil and is one of the best instructors in BJJ. He helped spread BJJ into Chile. Today, his style is kept alive through his academy “Associação Deo Jiu-Jitsu”. in Brasilia.

Involved in Brazilian Jiu-Jitsu since the 1950’s he is a student of Jorge Gracie.

One more in the group of Oswaldo Fadda lineage red belts. Flores is considered to be the main developer of Jiu Jitsu in the northern area of Rio. Sergio Bastos and Ignácio Santos Silva are among his most famous students.

Alongside Carlson Gracie, Robson Gracie, and Joao Alberto Barreto he was an instructor in the original Gracie academy. Before becoming one of the world’s premier MMA referees in the world, he dominated in Vale Tudo himself. His son, Redley Vigio is a coral belt police chief in Brazil, known to be ruthless towards criminals.

A former student of Master Aderbal Baptista he is also from the Fadda lineage. He fought in Vale Tudo and led the resident of the Liga Brasileira de Lutas Associadas, a Brazilian fight promotion. He is a highly regarded BJJ coach.

He is a veteran of the sport, living in Brazil. He owns three academies in Rio Grande do Sul,

Originally his teachers were Soishiro Satake and Mitsuyo Maeda. later on he established one of the top non-Gracie lineages in BJJ. The most prominent student to come out of this lineage was none other than Oswaldo Fadda.

A student of Jorge Gracie, he is a top BJJ figure in Sao Paolo. He was directly involved in the first case of “creontagem” in Jiu-Jitsu when he led an Helio Gracie student to switch academies after dominating him in a match.

A key figure in Sao Paolo’s Jiu-Jitsu scene. He was both proficient in Judo via the Ono brothers and in BJJ thanks to Jorge Gracie. His son Octavio de Almeida Junior is currently a coral belt.

A Jorge Gracie black belt, he is another important member of the Sao Paolo BJJ community. Carnivalle was known for fighting in other arts, such as Judo and Wrestling in order to prove the supremacy of Jiu-Jitsu.

The owner of the largest BJJ and MMA fight archive in the world. He is also famous for being Carlson Gracie’s best friend. Paqueta was a formidable Gracie Academy competitor and former bodybuilder. He was known to have legendary strength.

Trained by Reylson Gracie, he now operates an academy in Copacabana. Caio Terra is by far his most famous student.

A Gracie Academy representative in the early days, he was Helio Gracie’s first red belt. He fought and taught in Sao Paolo for decades.

One more Sao Paolo figure that contributed a lot to the spread of Brazilian Jiu-Jitsu. He was a part of the first Carlson Gracie team and also competed in MMA and Judo. He started training Jiu Jitsu with Master Oswaldo Rosa, “Paquetá”. 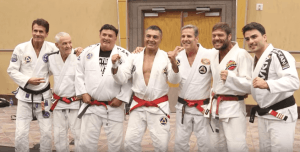 The latest red belt just promoted in 2017, Rickson is arguably Helio’s most famous son. He is considered by many to be the greatest BJJ competitor of all time. Rickson rose to prominence during the ’80s and ’90s by destroying the opposition in Vale Tudo and MMA fights. He now attempts to recapture the original self-defense oriented style of BJJ through his JJGF federation. His son Kron Gracie is following in his footsteps, dominating both the BJJ and MMA scenes. Check out the “Choke” documentary to learn more about Rickson Gracie’s life.