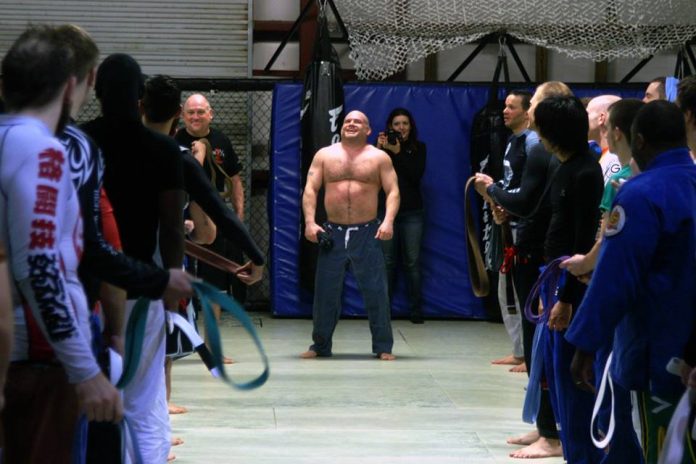 I’ve said it time and time again, the most important belt in Brazilian Jiu-Jitsu is the blue belt. The moment you get out of the beginner zone, you’ll never crave any belt more than the blue. However, it comes at a cost, at least in most BJJ academies across the world. there’s a traditional ritual in the world of Jiu-Jitsu that is somewhat barbaric but more or less embraced by the community. Namely, every coming of belt age (i.e. new belt promotion) is official after you’ve gone through the BJJ belt gauntlet. And it is fun for everyone but you. In the world of political correctness and other modern social constructs and concepts, the question that often arises is whether such a ritual should have its place in BJJ at all?

Rites of passage are traditions that are fast becoming extinct in modern society. It is understandable, as they reflect a different time. Yet, some of them are part of a tradition, and as such, can be harmless and fun. Others might involve some pain to a usually acceptable point. Finally, there are some that are outright stupid and rightfully abandoned. But, where exactly does the BJJ belt gauntlet fit? Is it harmless fun, painful but acceptable or completely out of line? Well, it depends on who you ask. And, most of all, it depends on who is the intended recipient. Luckily, it is often a matter of personal choice, so that nobody feels forced to do anything. That said, let’s look at what the gauntlet is, how it came to be and whether we should really call it quits.

Contents hide
The BJJ Belt Gauntlet
History Of the Gauntlet
The Meaning
Too Much For Modern Times?
The Wrap Up

The BJJ belt gauntlet is just as it sounds – a typical gauntlet. In Brazil, it is known as the “Corredor”. Essentially, you have a corridor of people standing with belts in hand, and you have to get from one side to the other, and in most cases, back. While you’re going through the corridor, people are whipping you with their belts. How hard the hit is down to them, as long as they keep within the bounds of the torso. Clothing is optional, albeit most people choose to go through it with a rashguard or T-shirt only. 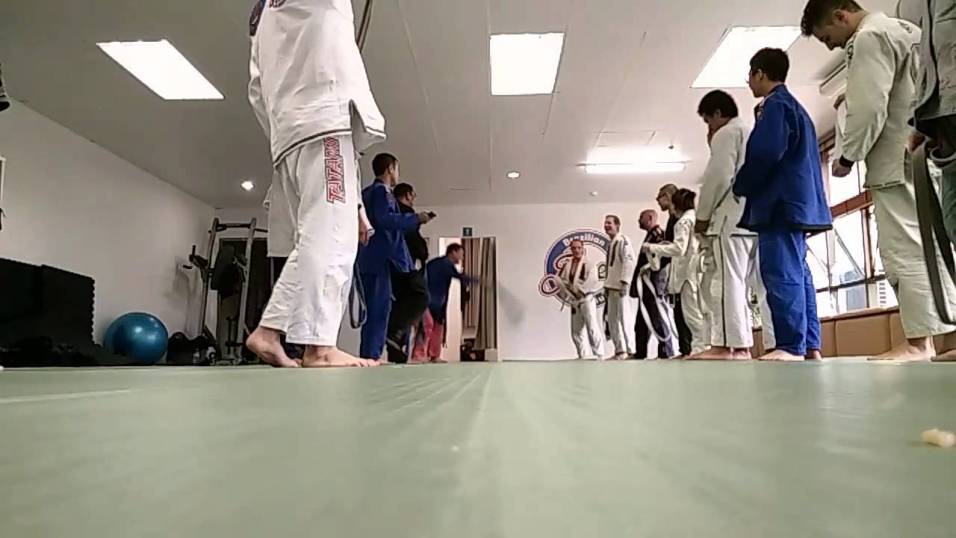 Wearing a Gi during the BJJ belt gauntlet is a bit like cheating, and most people choose not to do so. There are those bravest among us that also decide to go without anything on. Curiously (or not) enough, this ritual, in most cases, only pertains to male grapplers. For long, nobody questioned this particular ritual. However, after this ritual giving birth to some really wacky spin-offs. With modern society growing ever more politically correct, the “Corredor” is now a subject of much debate and controversy.

History Of the Gauntlet

The story of the BJJ belt gauntlet begins in the ’90s. In fact, it is not even something that originated in Brazil, but rather in the USA. Particularities are sketchy at best, but the man everyone seems to “blame” for the gauntlet is Chirs Haunter. Chirs is one of the BJJ Dirty Dozen (first 12 non-Brazilian black belts). The Rigan Machado black belt through a hazing ritual, similar to those in the army would do BJJ some good. As it turns out, it was all it took to start a ritual that took over the grappling world.

According to Hauter, the gauntlet did originate in the Machado’s academy, where he was teaching. However, the brothers were away, and it was Chris who initiated the first belt whipping corridor. After that, it caught on like wildfire!

While Hauter’s story has been confirmed, there’s also a version in which Fabio Gurgel is the forefather of the BJJ belt gauntlet. As per his blog, he dates the gauntlet back to 1988, when he first had the idea. Whoever started it first, Haueter or Gurgel, the fact is that it caught on and is still a big part of Jiu-Jitsu to this day. 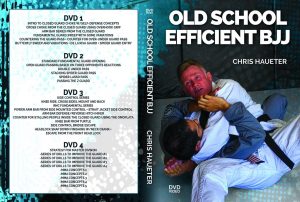 If you like old school, Dirty Dozen-style Jiu-Jitsu, then you have to pick up Chirs Haueter’s DVD instructional. Adequately named “Old School Efficient BJJ” this four-part instructional will take you through all the basic of BJJ in a no-nonsense fashion. From guard, through guard passes and competition strategy, this DVD has it all!

Rituals such as the BJJ belt gauntlet are a part of human culture and have been for ages. Certain remote tribes use rituals to mark the coming of age to this day, some of them truly horrific. There’s a Brazilian Amazon tribe, the Sateré-Mawé that have their 13-year olds wear a glove filled with angry bullet ants for a full 10 minutes to mark their coming of age. I would still be a white belt if this was a part of BJJ.

In BJJ, it is more of a hazing ritual than anything else. It demonstrates the tough side of grapplers and symbolizes the price you have to pay to get to the next level. In essence, it is designed to be a fun experience that celebrates teammates reaching a new level of Jiu-Jitsu. However, some people tend to take it too seriously and end up leaving people with bruises, which is not something most people are after. Some hazing is okay, but a savage belt whipping by 30+ people does not make you look forward to your next belt very much.

Too Much For Modern Times?

During a recent belt promotion at my academy, one team member left the gym in disgust and horror when the BJJ belt gauntlet began. The person didn’t even need to take part given it was a white belt in question. This person’s reasons for leaving are down to them, and luckily, it wasn’t the last we saw of this particular grappler. Later on, we explained it was all done in a friendly fashion. However, the belt marks on people who got promoted didn’t really make our case.

As such, even Fabio Gurgel claims the gauntlet has cost him a huge number of students. The modern trend seems to be to move more towards abandoning the gauntlet. Massive organizations like Gracie Barra have outlawed it completely, and others like Caio Terra are also big opponents of the ritual. On the other hand, some academies really take things out of context, bordering their “gauntlet” on assault.

Whether we look at the BJJ gauntlet as a “manly” thing to go through, or simply a primitive tradition, the fact is it is still a huge part f the sport. As such, laying some ground rules, and giving people that get promoted the chance to choose whether they’ll participate is a great way of turning the gauntlet back to a fun thing to do. A thing to remember is that people often join BJJ to avoid violence, not to seek it.

Do we really need the BJJ belt gauntlet today? The answer is not at all. Should we keep it as a fun and ritualistic thing to do? Of course, we should. But, to make sure we do not cause incidents, we need to establish some ground rules. Personally, I do not mind the belt gauntlet. As long as everyone wants to participate, and people control their violent urges, it’s all going to be fun and games. As it should be!

How To Practice Jiu-Jitsu As You Get Older