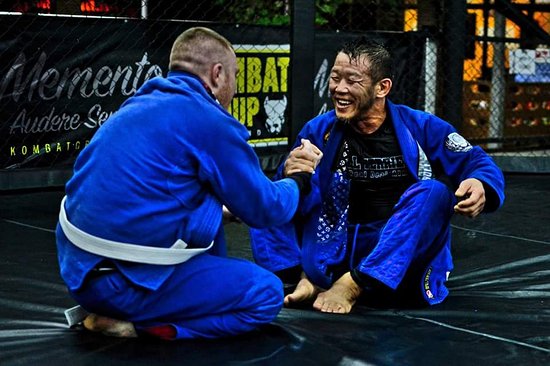 Very often people talk about respect, loyalty, and all the other stuff in martial arts. It all has to do with the perception of martial arts we have in the western world. As you probably know, most martial arts have roots in the eastern civilizations, who have quite different values philosophies, and customs. For them, it is a normal thing to show respect and be humble, while for use Westerners, they’re accomplishments we’re proud to have achieved. In that sense, I’d sum everything up with BJJ attitude, rather than dissecting different moral values one by one. There are some ways of acting in the gym and outside that really do make a difference.

It is not logical to expect that different people will behave the same just because that’s what the manual says. So, when we say we need to be respectful, humble, loyal, and what not in BJJ, you can’t expect everyone will act that way. However, we can talk about the BJJ attitude, and how each individual can act accordingly, while still acting within the bounds of their character. The point in BJJ is to change people’s lives for the better, and in certain cases, that doesn’t involve character. However, we can all aim to have a BJJ attitude that will create the correct training atmosphere, as well as a positive team spirit.

Contents hide
BJJ Attitude: It’s Not Just About The Chokes
Be A Good Person First, And A Good Fighter Second
Improve Your Attitude On The Mats
Summary

BJJ Attitude: It’s Not Just About The Chokes

When people ask me how promotions in our club go, I tell them that technique is the last thing on my list. Well, okay, I don’t say it quite like that, especially to beginners, but it is a point I make. The idea is that when someone is up for a promotion, it is not just how good they are in rolling that determines whether they get a belt. It is their overall demeanor, from the dressing room to the mats and off them that plays a huge role in determining whether someone is up for a promotion. Technique, how people act in class, rolling, competition (if they compete) and a bunch of other factors help professors determine belt promotions. This is especially true for the higher belts. 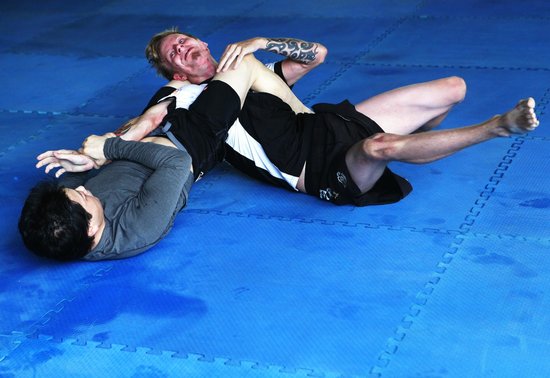 Brazilian Jiu-Jitsu has a lot to give to people, apart from the chance to simulate life or death combat several nights a week. There’s something I like to call the BJJ attitude that is a much bigger lesson that people learn on the mats. And it has nothing to do with some philosophical concepts or moral values. Of course, everyone is free to focus on their own values, but in a BJJ academy, the atmosphere is everything. It only takes a couple of people to ruin the atmosphere for everyone, on the mats, and in the dressing room. Sometimes such behavior is intentional, in other situations it is not.

The concept of BJJ attitude is simple – don’t treat people like you wouldn’t want to be treated yourself. It is not realistic to expect that all the people on the mats, especially in big academies, will be friends, o see eye to eye. When it comes to rolling, everyone has the right to say no to anyone, so that’s beside the point. However, there has to be common sense when it comes to how people treat each other, especially on the mats. And faking respect is not something I personally like to see. Common courtesy is more than enough to allow us to train in an environment that will help everyone grow and develop.

Be A Good Person First, And A Good Fighter Second

Speaking of BJJ attitude, let’s try and put things into perspective a little bit. From my personal experience, people usually take the whole eastern moral values to approach out of context, trying to behave like a reincarnation of Buddha himself. And it doesn’t last long. So why not try and figure out something realistic when it comes to how we act on the mats?

With Brazilian Jiu-Jitsu this is easy. The art humbles most people anyway, in one way or another. Rolling is the best douchebag filter in existence – those who don’t belong on the mats, stop showing up because of their bruised egos anyway. However, with all the people that remain, we can expect that we’ll have as many different attitudes as there are members of a club. And, with BJJ being the most relaxed martial art out there when it comes to training, sometimes people get carried away with we‘re just buddies having fun” vibe and things start going out of context.

Personally, I am, all for having a relaxed atmosphere when we’re on the mats. People learn best when they enjoy themselves, and that’s something I’m looking to constantly achieve in training. That said, the attitude I expect from students and instructors alike has to do with balancing the serious aspect of training and the fun ones. That means injecting a bit of common sense into situations and acting not how you want to, but rather how is appropriate for a specific moment in time.

Improve Your Attitude On The Mats

In terms of improving BJJ attitude, on and off the mats, there are some guidelines to further help explain what I mean by BJJ attitude. Let’ take a look at a few practical examples.

Talk to people. This is easy – be open to communicate. You don’t have to be an MC every time you’re on the mats, but do try and say hello, talk to people and be friendly. Moreover, it doesn’t matter what belt you are and who approaches who. This is an aspect of martial arts that deters people from training. Instead, just greet anyone and act as you always do, even off the mats, until such time that class begins. 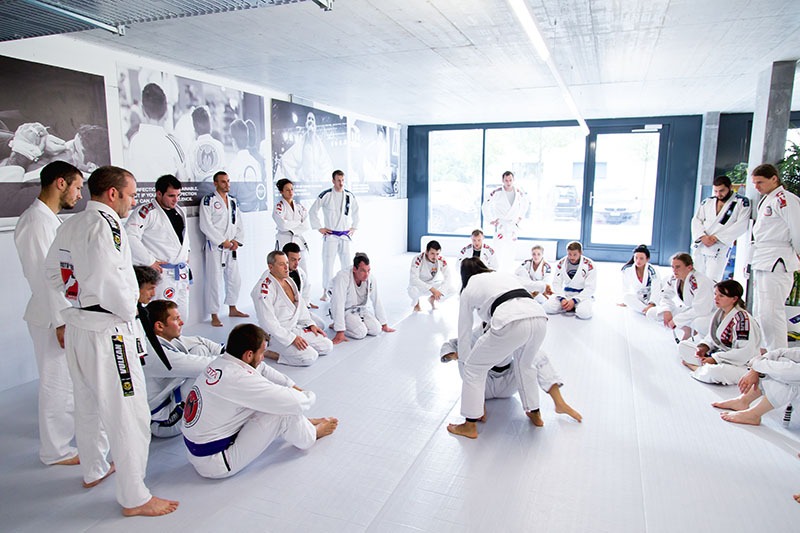 Positive feedback. It is very easy to see someone rolling, or trying to do something and criticizing or “fixing” them. Unfortunately, it is what higher belts tend to do. Yes, there’s always something to teach others, and instructors n particular have countless things to say about every little detail of the art/sport. However, there’s much more value in praising someone for what they did right than trying to fix what they did “wrong’ We’re training for that reason anyway – to fix and learn things. Hitting a move just right is actually something we achieve less than making mistakes. And it should be recognized and commented upon, especially by higher belts.

Help out. By far, something that is not at all mandatory and no instructor/gym owner will lever ask of you. However, helping around the gym, whether it is some administrative stuff, cleaning or chores, or even helping with classes is massively welcome. It is also an aspect of the BJJ attitude that truly shows you care.

Don’t trash talk. Well, at least refrain from trash-talking until you‘re a world-famous professional grappler. By thrash talking, I mean thrash talk, even jokingly, about anyone, from teammates to instructors, opponents at tournaments, and other schools and their members. Who knows, you might end up switching schools in a few years’ time. Why badmouth stuff you know little about? Just keep things simple and focus on the fun and the techniques.

The BJJ attitude is something you do learn. It is not a set of values or a bunch of principles but rather a way of thinking and acting. The good news is that you’ll grow into it naturally, given that BJJ classes tend to promote such an attitude. It is not something you’ll learn from books, videos, or even this article. It is, however, key, in my opinion, to understand that it is your attitude and not your life philosophies and moral values that matter on the mats. We can’t all act and think the same, or BJJ won’t be a fun thing to do!