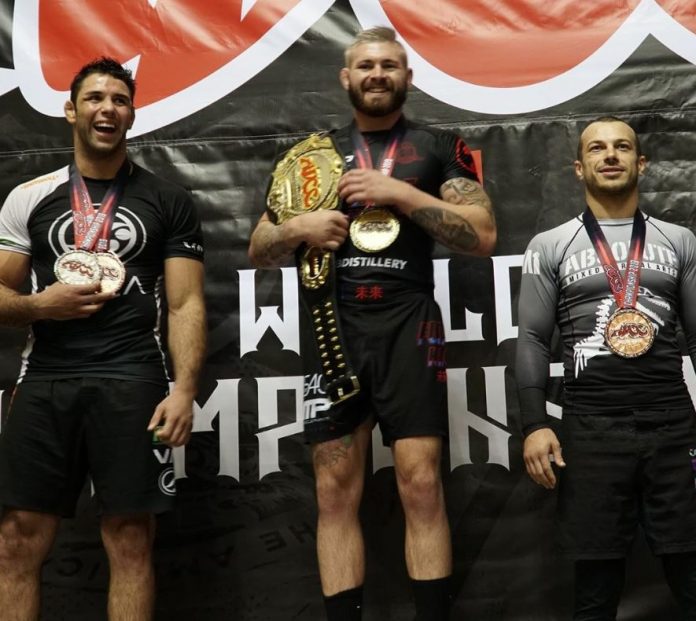 The claim that a smaller person can beat a bigger person is one of the claims that every martial art in the world clings to. In certain cases, it may even prove to be true. While the concept that someone could beat a bigger person is always there in theory, practice usually begs to differ. Brazilian Jiu-Jitsu is not too different – the entire art got popular based on that claim, which the Gracies did their best to prove. To a certain extent, they did, and the sport/art went viral because of it. Apart from confirming this popular martial arts claim, the sport of BJJ has allowed us to witness the same feats over and over again, in the form of BJJ giant slayers that are not afraid to punch high above their weight class. Pun intended.

Brazilian Jiu-Jitsu is a sport with lots of criteria when it comes to competition. People are divided according to age, sex, belt level, and weight. Out of them all, weight is one area where competitors can test themselves against people that are heavier than them (or lighter) if they choose so. The absolute divisions in tournaments provide not just entertainment but have produced BJJ Giant Killers of a world-class level. In short, every time a grappler from one of the lightest weight classes meets an ultra-heavyweight, the match is bound to be entertaining, one way or another. And picking out the winner can be even more difficult than in the regular weight classes.

The year is 2012. I am a white belt with a couple of stripes, standing in the yellow circle of a wrestling mat, my Manto Gi on. The opposite side of me is another white belt, with nearly the same “experience“ in BJJ as me. The only difference is I weigh around 155 lbs. and he is well above 200 lbs. Not just that, but he is also much taller and stronger. The idea of the coach is that at the end of training we do a mock competition, just two people inside the circle, with others watching. There are no weight classes. I hear the professor say to me “I’d go for the back if I ever had to battle a guy that big). Easy for him to say, given that the professor in question is well over 200 lbs. himself.

That particular “match” went pretty badly for me. The bigger guy smashed me to pieces and tapped me out with a choke. The only time I saw his back was when he was walking away from me after the tap. However, what the professor said back then stuck with me. I knew there’d be other occasions where I was set to grapple people much larger than me. That little piece of advice, to go for the back against a larger person helped me immensely through the years, and I still use it today whenever someone much larger is across me, whether is it is rolling or tournaments.

BJJ Giant slayers don’t just manage to beat bigger guys by luck. There are lots of tactics involved, especially at the highest levels of the sport. Going for the back is just one of the proven ways of gaining an edge when someone outweighs you by half your weight or more. Apart from the back, going for leg locks, or Kimuras is always a good idea because you’re using your entire body to attack just a small part of the opponent’s body. The choice of submissions is based on how high percentage they are, and if they work from both, top and bottom (like a guillotine, for example). Finally, and probably most importantly, never stop moving, especially when you’re’ on the bottom against a bigger person.

How would all these tactics look in a real-life match between BJJ black belts? There are lots of examples out there, but I focused on 6 grapplers that are proven BJJ giant killers and have done it on multiple occasions. Seeing them do their “magic” on the mats is one way of getting proof that the theory of a smaller guy beating a bigger one with technique and cunning is not a sham. Will it always work? Of course not. However, on those occasions that it did, it produces BJJ giant slayers and matches that are talked about for years afterward. Here are 6 grappling superstars that have managed to become a part of history with their giant-killing efforts on the mats. 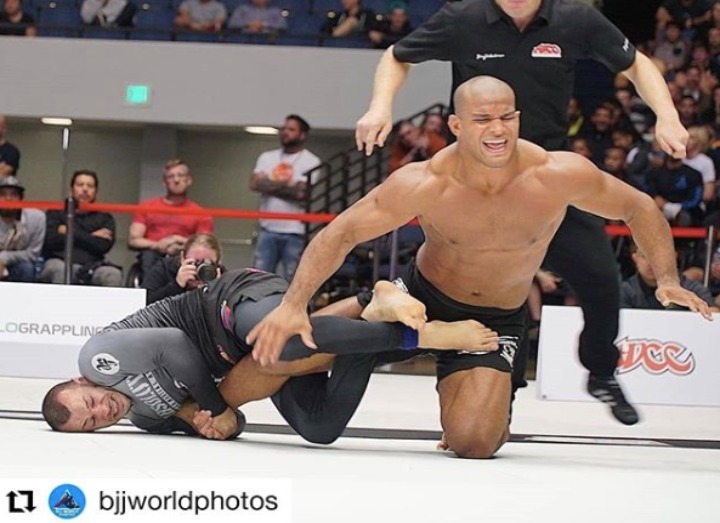 I’ll kick things off with something in regard to BJJ giant slayers that is still fresh in everyone’s memories. I’m talking about Lachlan Giles and his astonishing performance in the absolute division of ADCC 2019. Lachlan went in after a loss in the first round of his division, and in all honesty, not many people expected to see him get ahead. His first opponent was Kaynan Duarte, the man who won the heavyweight division in the same tournament. In a true David vs. Goliath performance, Lachaln submitted Duarte with a slick heel hook in what appeared to be one of the upsets of the tournaments. Only, he wasn’t finished.

Next came another giant in the shape of Patrick Gaudio. Another heel hook, another giant slain. He did come up against the giant of all giants in Gordon Ryan next and lost to a choke to the eventual winner of the division. However, Lachlan got the right to battle for the bronze against yet another colossus of BJJ – Mahamed Aly. The bronze ended up around Lachlan’s neck after another heel hook finish. However, apart from the bronze medal, Lachlan also became a part of the BJJ giant slayers club and went straight into Jiu-Jitsu history.

Mikey is another one of the pocket-sized BJJ World Champions that doesn’t shy away from the absolute division. He has plenty of successful giant-killing efforts behind him, but one of his biggest tests came in the latest IBJJF Europeans. 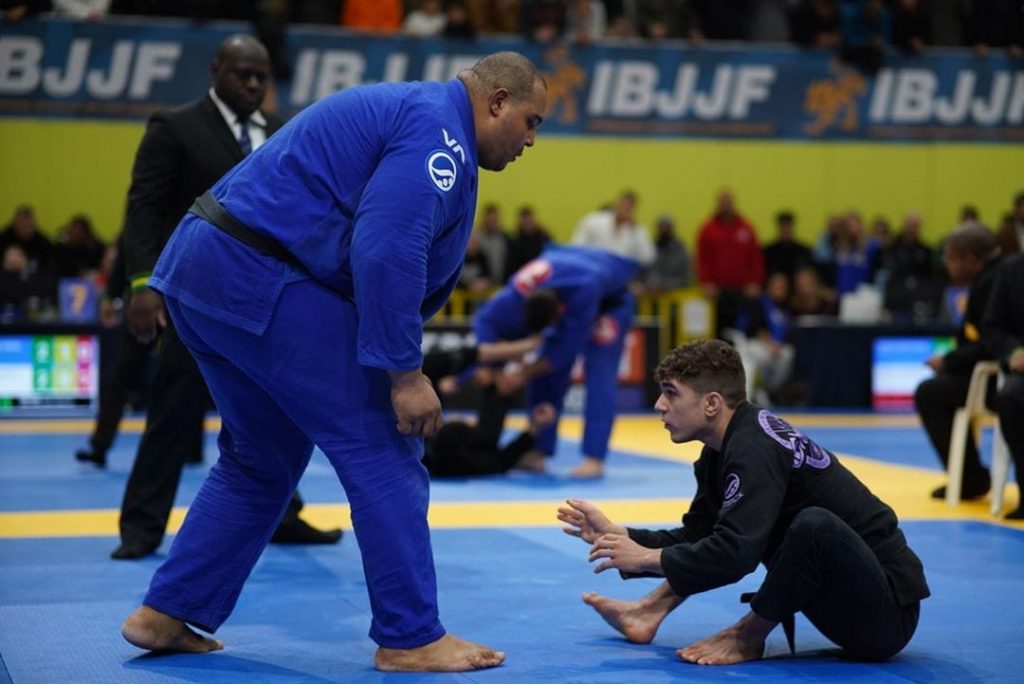 Mikey Berimbolo-ed past Jacopo Pasquini in the first round, which was “easy” for Musumeci given that Pasquini is a Medium-Heavyweight. The second round saw Musumeci enter a now-legendary match against Seif Eddine-Houmine an ultra-heavyweight that made Mikey look literally like a little child in relation to a grown man. He beat the giant via negative points for Eddine-Houmine, which means the match went to full time – an even more impressive feat. Unfortunately, Musumeci couldn’t get past Aly in the quarter-finals, even though the match was really close. 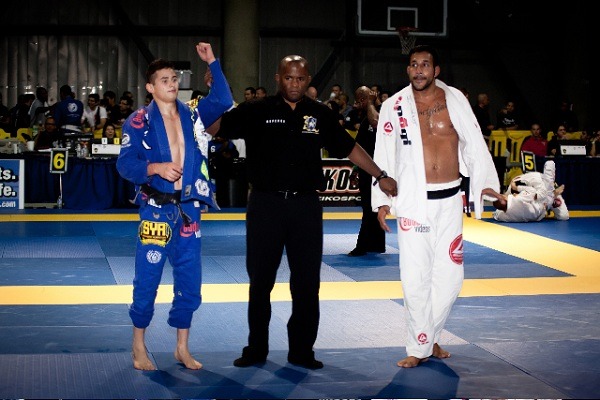 Caio Terra not only accomplished legendary feats as one of the best smaller framed grapplers ever but also made a name for himself by fighting and beating large opponents on a regular basis. He has so many matches in the absolute division, both Gi and No-Gi that it is hard to pinpoint his best efforts that landed him in the BJJ giant slayers club. His epic performance against Bruno Bastos pops up straight away, while his battle with Robert Fonseca was just as impressive, if not more. Given that terra actually won the No-Gi Worlds Absolute in 20013, I think he proved beyond a doubt that he has the knack for “big game hunting” in BJJ. 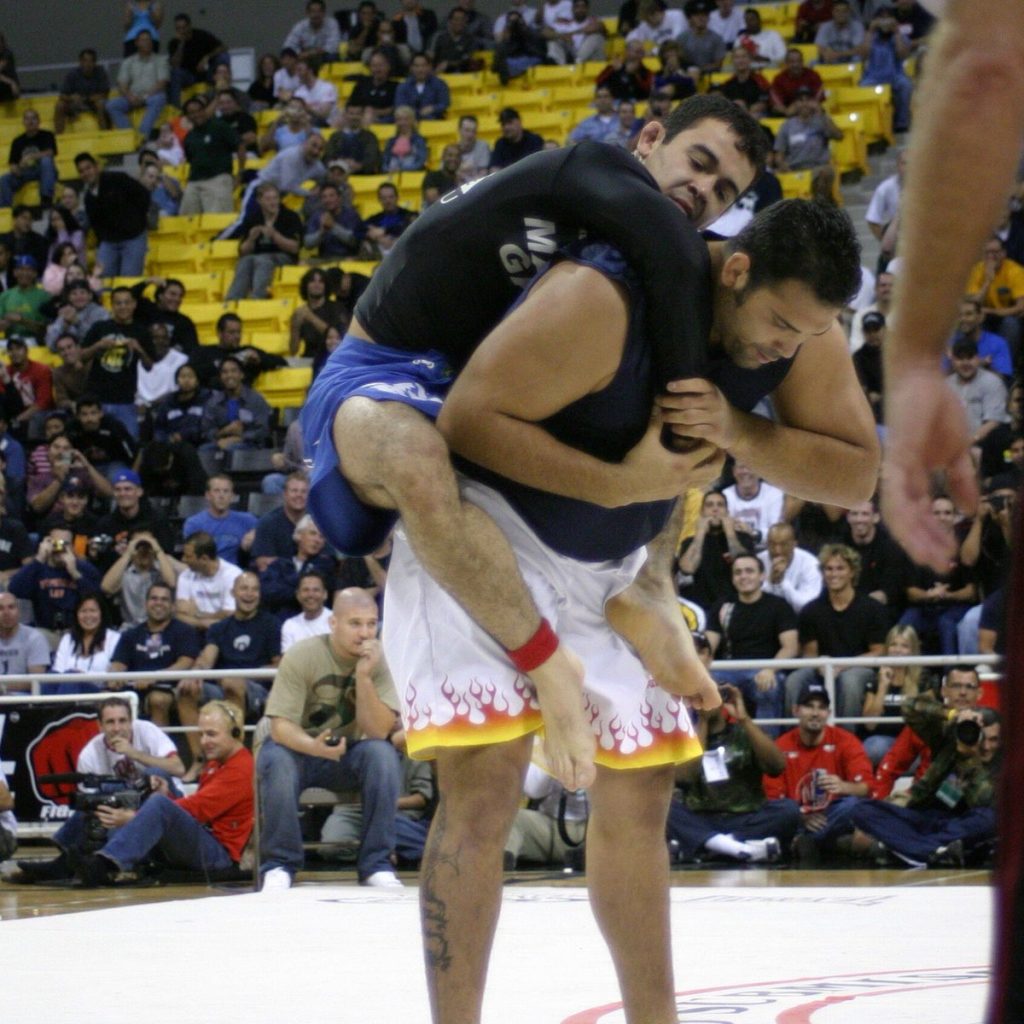 Marcelo Garcia is another name that’s easily relatable to giant-killing in BJJ. One of the GOAT title contenders in the sport, Garcia actually made heavier opponents feel scared of him when he was in his prime. Marcelo actually built his entire game around moves that were equally as effective against bigger, as they were against smaller opponents. Stuff like arm drags, the X-Guard and back attacks are still some of the most useful tools that BJJ Giant Slayers use. Some of the “larger” victims of Marcelo’s efforts include Andre Galvao, Roberto “Cyborg” Abreu, Xhande Riberio,  Thales Leites, Gabriel Gonzaga, and many others. He has a few bronze medals in the IBJJF Worlds absolute divisions, but even more impressively, has a bronze and silver medal from ADCC absolutes. 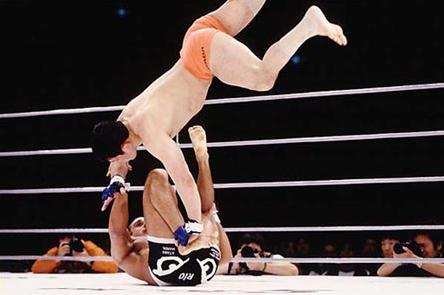 “The Gracie Hunter” and arguably, the most entertaining Japanese fighter/grappler to watch was always going to end up in a list that focuses on BJJ Giant Killers. He has beaten plenty of huge names, along the lines of  Royce and Renzo Gracie, and Vitor Belfort. While Sakuraba made his name slaying giants mostly in MMA, he did it with grappling tactics. His Kimura trap game is out of this world (broke Renzo’s arm), and his nasty armbars brought down giants like Kevin Randleman with apparent ease. His efforts with the low single leg takedown against people of Igor Vovchanchyn’s caliber are also the stuff of legends. 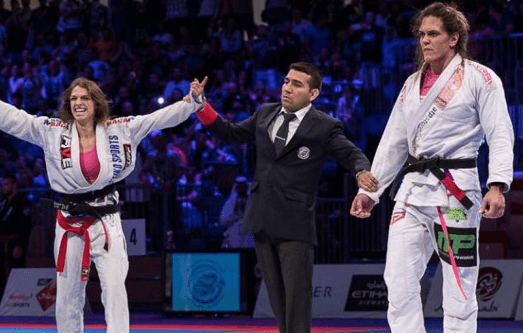 Mackenzie Dern was never one to shy away from grappling anyone. Her matches against Gabi Garcia, who is probably the largest female in the sport, are nothing short of extraordinary. It was a rivalry that lasted for years, with Gabi walking away as victorious against the IBJJF and UAEJJF World champ Dern. It took Mackenzie several occasions, but she finally managed to slay her giant during a legendary match at the World Pro in Abu Dhabi, where she managed to finally beat Garcia via a penalty.

Will you suffer a lot if you try to become a giant killer yourself? I’d say that is guaranteed rather than just probable. However, even if you are the smallest grappler in your gym, that doesn’t mean you can’t join the BJJ Giant Slayers club. Going straight into the absolute at the next tournament is probably not the best idea, though. Start practicing a lot with the bigger people in your gym, and if possible, the bigger and more experienced ones. That is how giant slayers are forged in Brazilian Jiu-Jitsu.