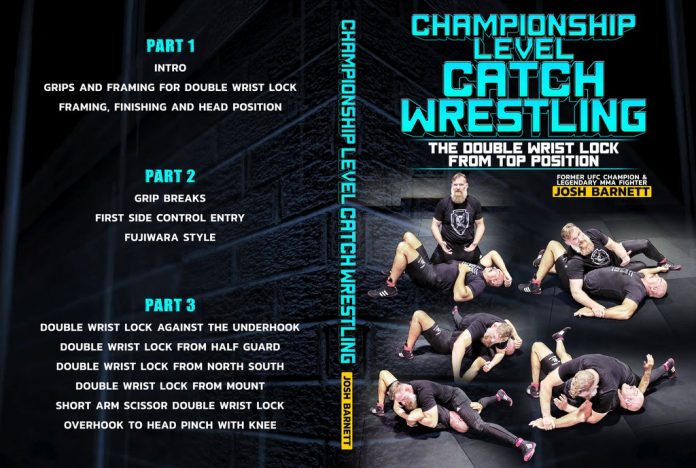 Oh boy, do I love me a Josh Barnett DVD! He can just release a DVD of him talking and I’ll probably be the first one to get it. That man has a wealth of knowledge, and one of the wittiest ways of delivering that knowledge to students than I have ever seen in grappling. Plus, he is a seasoned fighter, UFC veteran, catch wrestler with a no-nonsense approach. With the grappling world seemingly wising up to the benefits of catch wrestling, Josh now issues an instructional of his own “Championship Level Catch Wrestling” here’s what you’ll find inside.

Catch wrestling has been in my sights for the past 4 years. I wish I gave it some thought earlier in my grappling career, but I’m definitely not moaning about it. There is a reason why catch wrestlers like Josh Barnett have found it easy to grapple in MMA settings, and even in BJJ/grappling tournaments. Catch wrestlers simply adjust to BJJ faster, and learn quicker than people coming in with a background in other martial arts. The reason is simple – both BJJ and catches wrestling are submission-based arts. “Championship Level Catch Wrestling” is a Josh Barnett DVD that will give you a definite competitive edge in Brazilian Jiu-Jitsu or any other combat sport that allows submission holds.

Josh is a really interesting character. He is one of the most interesting people in grappling, both as a competitor and a coach. It is beyond a doubt that he has lots to teach. He is not just extremely accomplished as a fighter but has also spent a lot of time learning from the best in the world, like legendary wrestling coach Billy Robinsons and 10th Planet’s Eddie Bravo. In fact, he got his black belt from Eddie Bravo (an honorary one) but then got a second degree on it from Rigan Machado, which is more than deserved and nothing to do with honorary. Not that Josh needed the ranks to recognize that he is one of the op grapples alive. 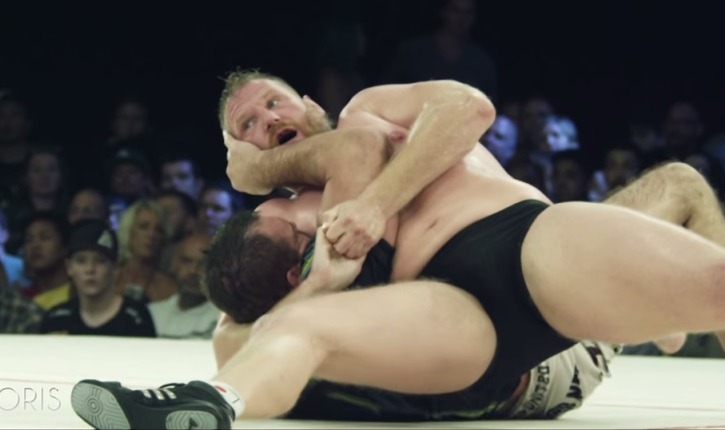 An MMA record od 35-8 at the highest level of the sport further demonstrates Josh is not one to mess around with. His legendary submission of Dean Lister in Metamoris via a catch wrestling chest compression choke from a scarf hold further adds merit to his crazy style fop grappling. Before all that he also fought in Pancreas, Pride, Dream, Strikeforce, and just about any organization out there worth mentioning. Actually, he is not done with MMA yet, as Barnett is on Bellator’s roster at the moment, though he is still to make his debut.

From a more grappling specific standpoint, Josh battled in different organizations that promote professional wrestling and submission grappling his entire life. Those include the New Japan Pro Wrestling organization, Inoki Genome Federation, Game Changer Wrestling, etc. That really does translate to Championship Level catch Wresting, which “just so happens” to be the name of the latest Josh Barnett DVD instructional.

I’ve probably written so much about why catch wresting is great for BJJ in previous articles that it is becoming off-putting. And still, I’ll do it again! I’ll try to keep it short, though, I promise. One reason why I love catch wrestling for BJJ is submissions. Plain and simple, catch is all about submitting someone quickly and without a doubt as to their surrender. And, unlike the intricate and sometimes overly complex nature of BJJ submissions, catch wrestling submissions are straightforward and based on causing your opponent pain. And pain is something everyone responds to when you do it right.

This type of submission holds s not something we see in BJJ too often. Don’t get me wrong, an armbar or straight ankle lock will hurt, but there’s no sudden onset of pain because of pressure that causes people to panic tap like they’re playing the drums. With catch wrestling, things work pretty much along those lines, without lots of focus on positional control. This is exactly why catch and Jiu-Jitsu are the perfect pair – they compliment each other like in a fairytale. And that’s before I even mention the standing aspect of Catch, which tie takedowns along with submissions and top position pressure. The Championship Level Catch Wrestling Josh Barnett DVD has them all.

What you can expect from a Josh Barnett DVD is to have fun while watching it. He makes jokes, is down to the point when explains stuff,  and has a great sense of leading you through a move, starting off easy and progressing gradually until he reaches advanced stages. That makes this instructional perfect for anyone, regardless of belt level or experience.

The subject matter of Championship Level Catch Wrestling is a simple one – the double wristlock. You have no idea what that is? Okay, I’ll put in terms BJJ folks will understand – it is all about the Kimura grip, and everything that you can do with it. IN wrestling and catch wrestling, the Kimura is known as the double wristlock and is much more than just a submission hold.

IN the first of three volumes of this Josh Barnett DVD set, the “Babyfaced Assassin” starts off with a short intro, setting the tone for the entire instructional. He then moves on to talk about the double wristlock, and what it represents in grappling, not just catch wrestling. That leads right into the grips, which is something of a never-resolved issue in grappling. Josh has a simple recipe that will make things clear once and for all. For starters, you’ll start seeing the grip configuration as a frame rather than just a way of holding and that is mort ha enough to change your entire perception of things.

Barnett also utilizes a method of teaching I personally really love – eh shows the grips and finish first, before heading to explore enters, setups, counters, and other areas of the double wristlock later on. That means that after the grips, finishing mechanics and the all-important head positioning follow suite.

There are “only” three chapters in this second portion of the ‘Championship Level Catch Wrestling: instructional. It just so happens, that it is all you need to understand entering into the position, and remaining there indefinitely. Side control is how Josh prefers to explain entering into the double wristlock,. But only after he covers the crucial theme of grip breaking. Spicing things up, where wraps the second portion of the instructional up with the Fujiwara style entry and setup, really adding some classic catch wresting flare to this DVD. 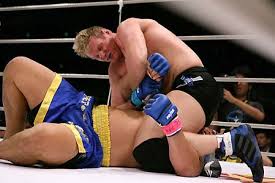 The final portion of the “Championship Level Catch Wrestling” Josh Barnett DVD is the one containing the most chapters. Given that all the entries, finishing, and holding mechanics have already been covered, it is now time for some practice applications of all that knowledge.

Here Barnett covers getting to, holding, and finishing the double wristlock form most positions. Moreover, it offers a great way of using it to control and transition in between them, torturing an opponent endlessly. Josh starts off explaining how you get the position against an underhook, which is just as useful standing as it is on the ground. Double wristlocks form half guard, North-South, and mount follow. Wrapping things up are two unusual, unorthodox, and very painful ways of having fun with the double wristlock. On is the short arm scissor double wristlock and the second is an ovehook with a head pinch. Trust me, you’ll love ‘em!

Another day, another Josh Barnett DVD. This one though, has Josh going back to his roots, back to “Championship level Catch Wrestling.” The focus subject of the instructional is also a great choice, as the double wristlock, AKA Kimura, is something we often take for granted in BJJ. What this instructional does is take both the Kimura lock and the Kimura trap one step further, opening up opportunities most BJJ folks have not thought about.